Share All sharing options for: Trigger Time for Ryan  Daniels 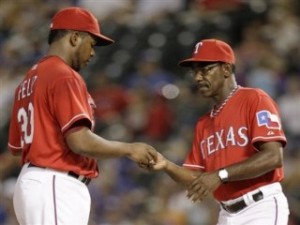 This is where I thought the Rangers stood going into the last week before the non-waiver trading deadline, which strikes at 3 p.m. CT on Sunday:

With roughly 72 hours remaining before the deadline, most of that remains true.  The Rangers primary targets -- Padres relievers Heath Bell and Mike Adams among them -- all remain available as of this writing.  What has changed is the Rangers' degree of leverage, which has eroded (perhaps substantially) over the last four days.  This means higher prices for the pieces they need.  Part of this is due to a couple of (apparently) lopsided deals that will have a ripple effect on the overall market: (1) the Giants overpaid for Carlos Beltran; and(2) the Cardinals likely incurred (willingly because Tony LaRussa decided to have a big dick contest) long-term damage with the Colby Rasmus deal.  If Giants GM Brian Sabean found a box of turds on his stoop this morning, chances are it was postmarked from Arlington.

But if the Rangers do end up overpaying for pitching at the deadline, they'll really have nobody to blame but themselves.  Like it or not, industry discipline on sample size disappears like a fart in the wind in the days leading up to the deadline.  In the last 4 days, the Angels cut the Rangers lead to a skimpy 2 games after Ervin Santana no-hit the Warriors of the Cuyahoga yesterday.  Meanwhile, not only have the Rangers lost 3 of their last 4 games, they've done so in a spectacularly horseshit fashion that further underscores the actual and potential weaknesses of the roster.  Here are a few things to keep in mind as you process the myriad rumors flying around between now and Sunday afternoon:

The Rangers bullpen problems don't end with the 8th inning.

Not only did Neftali Feliz blow another save Tuesday night,  he blew it to the Minnesota Twins.  Normally, the only way to lose a lead against the Twins is to allow them to hit off a tee.  This is one of the three or four worst offenses in baseball by anyone's measurement.  Feliz blew 3 saves in 2010.  This year, he's already racked up 5.  And it's certainly not a caseof overuse, since manager Ron Washington hasn't burdened himself with modern conventions on leveraging relievers.  Earlier this season, there were concerns regarding Feliz's velocity, but he's now throwing the ball about as hard as he did last year.  I think he has two big problems: lack of command and a shitty attitude.  He might have one other problem: an injury.

See, here's the thing about major-league hitters -- or even AAA hitters.  If the 4-seam fastball is the only pitch you can throw for a strike, but you don't have relative command of that pitch within the  zone, then they're going to puree the son of a bitch no matter how hard you throw it.  All season long, Felizhas flirted with fastball command issues while having fairly consistent commandproblems with his slider (his acts more like a deuce no matter what he calls it).  As for his change, all I can say is that you have to be able to throw one before you can command it.   A few treys show up on his pitch fX data, but whatever he was trying to throw didn't look like a major-league change-up to me.

Yesterday, Washington -- the consummate player's manager -- took the extraordinary step of woodshedding his self-proclaimed most precious pitching asset in the media.   He finally gave an official voice to concerns that Felizisn't approaching the game withanywhere close to the sense of urgency he displayed last year.  To me anyway, Feliz gives off a very disturbing whiff of entitlement.  He says he's just more relaxed this year because he proved to himself last year that he could get the job done.  This is utter bullshit.  Name a top-flight closer who has a "relaxed" approach to the game.  For crissakes, Mariano Rivera can make a hitter shit his pants just by looking at him.  Feliz comes into the game like a spoiled 12-year-old being dragged to the dinner table at the expense of a Fresh Prince of Bel Air re-run.

Although Daniels and Ryan won't say so, these two factors are precisely why the Rangers are looking at closers at the same time they're saying that they need set-up guys.  What this bullpen really needs is two, maybe three back-endarms, including one who can serve as a better option to close than Feliz.

One more thing in the interest of fairness: Adam Morris at LSB points out the possibility that Feliz's commandproblems are a sign of arm trouble (specifically the kind of elbow trouble that usually ends up being treated by Dr. James Andrews using a procedure named after a certain former Dodger pitcher).  I haven't given that enough thought to weigh in on it one way or the other, but I respect Adam's opinion and as such wanted to mention it anyway.  In any event, I still think Feliz is acting like a prick.  I wonder if he lockers next to Ian Kinsler?

I think the Rangers are pursuing both of them, but most of the talk has been centered around Bell.  If I could only have one of them, I kind of think I'd rather have Adams (assuming a deal for another closer could be struck elsewhere).  Joey Matches over at BBTIA has done as good a job as anyone highlighting the potential problems with Bell.  This from his morning post:

Out of 137 qualifying major league relievers, do you know where Bell's present strikeout-to-walk ratio (1.94 K/BB) ranks? 102nd. Which isn't to say that Bell wouldn't still represent some amount of improvement over the current status quo (the Rangers' team relief strikeout-to-walk ratio is just 1.89, or 20th in the game), but I'm not a fan of Bell's sliding peripherals at all, and, as Pras mentioned a few mornings ago, you have to harbor at least some concern about how he's going to fare in a tougher, unfamiliar league, with half of his games being played in a much less forgiving environment for pitchers. And, of course, Bell doesn't get you any further towards answering next year's bullpen riddle. Be careful what you wish for.

Adam Morris also has a comprehensive look at this issue on Lone Star Ball.  And, in the midst of writing this, Jayson Stark is reporting that the Rangers are working on a deal with the Padres for Bell, Adams AND Chad Qualls.  At the same time, the Rangers are putting out the word that the Padres asking price is too high, but I think those suggestions are just part of the chess game being played by the opposing GMs.

Even if they got that deal, I still think the Rangers need another lefty in the bullpen to handle the Yankees should they meet again in the playoffs.  I like Arthur Lee Rhodes because he's a good guy from Waco, but based on his age (41) and season results to date, he either needs to go back to the NL or hang it up.  AndI'm not comfortable with Darren Oliver and Barbara Feldman as the only lefty options in the bullpen for the playoffs (assuming Texas can hold off the Angels).

Don't be surprised if you see the Rangers also making a move for another front-end starter.  On the one hand, that would be a bit of a head-scratcher given the rotation's success this season.  On the other hand, it makes perfect sense.

Based on the season results through the Toronto series, it's clear that the Rangers haven't missed Clifton Phifer Lee, at least not per se -- and obviously discounting future playoff considerations.  I'll save you the abacus-whipping -- just refer to the sortable metrics for AL rotations at Fangraphs. According to a majority of key metrics, the Rangers have no worse than the third best rotation in the league -- and in any case better than Boston or New York.  According to some measurements, they grade out in the top two (SIERA, xFIP and ERA among them). C.J. Wilson (10-4 / 3.16 ERA / 3.38 xFIP) is having a terrific year (Tuesday night's turd in the punch notwithstanding) , and Colby Lewis (10-8 / 4.00 / 4.06) has by and large resumed his 2010 course (although he's still way too dong-prone, the vast majority of them have been solo shots). But there is no way that the Rangers get into this position without major breakout years from Matt Harrison (8-7 / 3.05 / 3.88) andDerek Holland (9-4 / 4.43 / 3.87).  More than anything else, of course, there's been the Alexi Ogando bonanza -- 10-4 / 2.79 / 3.75.  Not bad for a guy who earned his spot in the rotation thanks to Tommy Hunter's case of the broke dick.

What they miss about Lee is the mental assurance provided by his track record.  The alarming thing about all five members of the Ranger rotation is the absence of an established record of success sustained over multiple seasons -- or with respect to Ogando, Harrison andHolland, much of a record at all when it comes to pitching an entire season in the rotation.  Wilson is in his second full season as a starter, andLewis is one year removed from baseball purgatory in Japan.  Even so, both of those guys appear to be sturdy andeach handled a 200+-inning workload last season with no perceived ill-effects, andbothare on pace to eclipse the 200-IP mark again this year.

The primary concern here is Ogando, who is in completely uncharted workload territory; he'll likely triplehis IP total from last season with his next start (he's already at 119.1).  Ogando is averaging almost 7 innings per start, and if he maintains his current pace, he'll be approaching 200 innings by the end of September.  Little is known about Ogando's workload while he was in exile on the State Department's shit list from 2006-2009, except that he pitched a combined total of 81 innings in short relief over three seasonsfor the Rangers' short-schedule Dominican summer team.  That's a long way from the Bronx or Fenway, baby.

Holland and Harrison are also on track to exceed 180+ innings for the first time in their careers.  The 24-year-old Holland, a/k/a the "Dutch Oven" (Jesus, what a great nickname) is on track to exceed his major-league workload from the last two seasons combined (195.2 in 2009-10; 199 if he makes another 11 starts this year).  Remember that this is a kid who pitched one season in JC and only two full seasons in the minors before coming to Arlington.  The 25-year-old Harrison is in a similar situation.  His major-league workload from 2008-10 was 83.2, 63.1 and 78.1 innings respectively (a combined 225.1 innings).  Year to date, Harrison's pitched 118 innings in 19 starts; that projects to around 187 innings for the regular season.  The last time Harrison exceeded 100 innings pitched including major and minor-league stops was 2008, when he logged 167.2 innings between Texas, Oklahoma City and Frisco.

Everybody knows that the Rangers as an organization have had all their pitchers on the Nolan Ryan plan since he came back to the fold a couple of years ago ("get your ass back out there and give me two more innings, son").  Nevertheless, the Rangers would be thumbing their nose at medical science not to expect some degree of regression in this group in the last two months of the season.  If the opportunity presents itself, don't be surprised to see the Rangers make a serious run at another starter in the next 72 hours.  Don't pay any attention to reports suggesting that the Rangers aren't working the Ubaldo Jiminezsituation with the Rockies.  It's a longer shot that the aforementioned deals for relievers, but they're in on it.  They're also talking to the Dodgers about Hiroki Kuroda (although I view that as even less likely than Jiminez).  And yesterday, Gerry Fraley at the DMN suggested that Texas is talking to Tampa about James Shields.

Time for me to head to the yard.  I'll be back with more after tonight's game.