The year's edition of Maple Street Press' Longhorn Kickoff 2011 is out and for the low online-only price of $9.99 you too can enjoy the prognostications of Peter Bean, Wescott Eberts (aka Ghost of Big Roy), Cory Davies and BC's own Nickel Rover, among others. It is packed full of 128 pages of truly interesting content. If I’ve done my job, by the end of this post, you will want to get yours right away.

The magazine as a whole provides a rosy look at the future of the Longhorn football program. What it lacks in critical evaluation of some obvious weaknesses, it more than makes up for with depth of analysis. Peter Bean takes a detailed look at the Texas players, position by position, both evaluating current talent and attempting to predict the contributions of incoming freshmen. Coming to many of the same conclusions as Scipio here at the Carnival, Bean sees a lot of unknowns on offense and shallow depth at tackle and in the secondary on defense. While acknowledging trouble areas, Bean focuses on the upside potential of an unquestionably talented group. Particularly interesting is his take on the Texas receiving corps, calling the Longhorn wideouts "deep and talented" while acknowledging what I think most fans recognize as an unproven and underachieving group in the past. All in all, it's a very detailed preview and very much worth the read.

Next, Wescott Eberts takes the focus to the new class of incoming Longhorn talent along with the team's achievements in recruiting for 2012. Grading the recruiting accomplishments by position, Eberts finds personnel weaknesses at offensive line (shocking, I know) as well as defensive end. Eberts also has an interesting take on what many see as a curse of riches at the quarterback position, giving the Horns only a B+ in this category.

Then, in a game-by-game preview of the 2011 schedule, Eberts does a solid job of tempering expectations. Without making any firm predictions, he makes the point that "if Texas struggles to develop this year, it may be another season on the edge of bowl eligibility." While I don't expect things to be this dire again, it is hard to deny that, with OU, A&M, and Oklahoma State extremely talented this season, the Longhorns margin for error is razor thin. As Eberts points out, Texas cannot afford to have another home season like last year and must come up with wins over the, shall we say, less talented Big XII and non-conference opponents that make their appearance at Royal-Memorial.

Both Mike Kuchar and Peter Bean follow up the season preview with a look at the Harsin playbook, while making some predictions as to how the Texas personnel, as it currently stands, will be able to perform in the new motion and movement dominated system. Kuchar presents a very detailed look at the base formations favored by Harsin while Bean evaluates current personnel within the system in an interesting attempt to predict the unknown: how will this team adjust to a completely new offense in a single offseason? Bean has a uniquely optimistic outlook on the abilities of a much-maligned offensive line as well as the abilities of the receivers and tight ends. His take on the running backs on campus leaves readers wondering who he favors at that position, however, Bean makes it pretty clear that Malcolm Brown, should he be mentally prepared, is physically well-adapted to the base rushing attack of the Harsin offensive philosophy. It is a thought-provoking piece that should be mandatory reading for Longhorn fans.

The magazine wraps up with a less detailed but interesting preview of the Manny Diaz defense and a piece on the coaching accomplishments of Mack Brown and his incredible run of winning seasons at Texas. This is a magazine written by Texas fans, for Texas fans. It definitely puts a positive spin on many deficiencies that are likely to exist for the 2011-2012 Longhorns. At the same time, it is a technically sound, meticulously-researched, and well-written preview of the upcoming season that will undoubtedly get any fan excited for the possibilities and promises of one of the most enigmatic Longhorn teams in recent memory. It is packed with additional content including an update on Longhorns in the NFL and tips for road game road-trips, including an actual list of attractions to see while at the Baylor game in Waco (bold, I know). 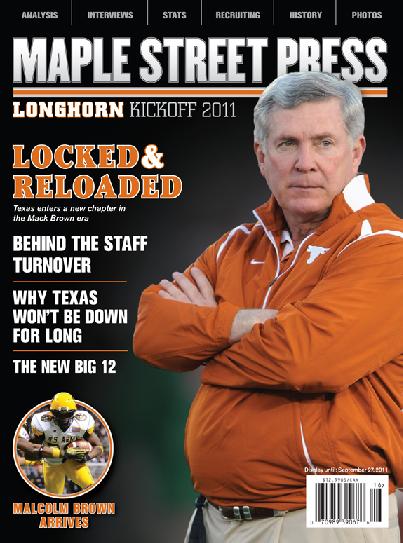