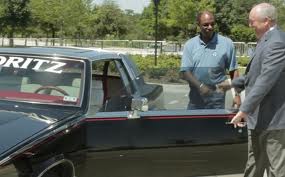 Koji Uehara hails from Osaka, Japan. Mike Adams was born in Corpus Christi but grew up in Sinton, Texas, both of which, according to the Googleplexer, are a long fungo and 6,700 miles in a kayak from Nippon. And just in case Thomas Friedman is on the hunt for more factoids from which he can over-extrapolate some global macroeconomic bullshit to dazzle Charlie Rose viewers, there's this: Guess which one of these two newest Texas Rangers found a high school teammate in the clubhouse when he joined the team? It was Uehara, who was enthusiastically greeted by Yoshinori Tateyama, his old mate from fightin' Tokai Gyosei. (Cheer, cheer for Tokai Gyosei / Wake up the echoes cheering her name...)

Incidentally, if you haven't seen Tateyama pitch this year, you should glance at the highlights now and then. You can't miss him -- he's the sidewinding righty whose pants ride up under his armpits because he apparently lost his entire ass in some sort of dreadful industrial mishap. Anyway, Uehara and Tateyama also have something else in common: they both take the field with these flaccid bean-baggish beer league softball gloves that bear a startling resemblance to Madeline Albright. Given Tateyama's stature -- his weight ballooned to a buck fifty Tuesday night in Detroit when he pitched in the rain -- the glove adds an element of deception since the ball looks like it comes out from behind a wind-blown tent flap.

And although Tateyama is a decent pitcher in his own right, that's where the baseball similarities with Uehara end. In terms of what Uehara brings to the Ranger bullpen, he's much more similar to Adams in one particular respect -- they're both dirtier than a bag of assholes. (A quick take on their respective arsenals follows at the end of the post.)

According to Inside Edge, a national scouting service used by several major league clubs to supplement their in-house shopwork, the five highest-rated relief pitchers in baseball through the end of July were (based on a 100-point scale): (1) the Giants' Sergio Romo, 96.7; (2) Uehara, 96.1; (3) Adams, 95.0; (4) the Nats' Tyler Clippard, 93.8; and (5) Philly's Antonio Bastardo, 92.1. The conventional wisdom held that the only one of those five who might be available was Uehara. The Padres were aggressively trying to move their closer, Heath Bell, but the sign over Adams's locker read "No Sale."

And then, of course, Rangers GM Jon Daniels went out and nailed both Uehara and Adams in the last 48 hours of the non-waiver trading period. Not only did Daniels address the Rangers' most significant need with ultra high-impact players, he did so without raiding the uppermost shelf of the farm system or yielding key pieces off the current roster. By nightfall on Sunday, Texas was being hailed as the big winner at the trading deadline by the old-schoolers and sabermetric intelligentsia alike -- and that's no mean feat. Some notable pundits, including Yahoo's Jeff Passan, went so far as to say that the Rangers now have the most dangerous bullpen in the American League.

One way or another, Passan is right. The Rangers' bullpen will be the most dangerous unit in the league, but the question is whether or not it will be a danger to opponents, or just continue to be a danger to the Rangers. There are two reasonable arguments here.

On the one hand, the Rangers are going into the stretch drive with the makings of a bullpen that can turn a close game into the proverbial 6-inning affair, with Uehara, Adams and Neftali Feliz going hammer down in the 7th, 8th and 9th. This is exactly what we saw on Thursday, when the trio -- supported by a nice piece of matchup work from Darren Oliver (finally in an appropriate role) -- combined to shut down the Tigers on one hit over the final 2.2 innings to end a 3-game losing streak, preserving sole possession of first place in the AL West in the bargain. If those assets are performing to capability -- and if they are deployed properly -- then yes, it's without question the most lethal back-end combination in the AL. On the other hand, the viability of that scenario depends on two rather unstable variables: manager Ron Washington, and to a much greater extent, Feliz.

As to the former, watching Wash "manage" his bullpen can be slam-your-dick-in-the-car-door painful. At least once a week, my wife can count on interrupted slumber thanks to yet another one of my nightmares about Game 2 of the 2010 World Series. Excuse me if I've said this before, but Ron Washington and post-modern conventions on leveraging relievers are mutually exclusive elements of baseball. Now, it has been suggested that Uehara and Adams are both so good against lefties and righties alike that Daniels finally succeeded in making his bullpen "Wash-proof." I should say here that I have a soft spot for Wash -- his players love him and respond well to him, and how can you not like a guy that drives a 1985 Caddy Biarritz and indulges in the occasional Winston (not to mention God knows what else). Nevertheless, having observed his ersatz gut-based approach to running a baseball game for almost 5 years, it's safe to say that the notion of "Wash-proofing" a bullpen ranks with prohibition in the annals of dubious endeavors.

That said, Wash's gut is a much smaller problem than Feliz's head -- unless it's hidden arm trouble that's made him so maddeningly inconsistent all year. The Rangers say that they're sticking with, and counting heavily upon, the reigning AL Rookie of the Year to close. Based on his season to date, Ranger fans better hope that the offense, Uehara and Adams give Nefti a long string of 3-run leads to "save." Lesser margins may be extremely hazardous. The day after the Adams deal, I ran a 2011 performance comparison of Uehara, Adams and Feliz according to 28 different traditional and advanced metrics. If you want the full-on abacus-whipping, shoot me an email or let me know in the comments and I'll send you the chart. It tells the story of two superior relievers and one who has either regressed substantially, or is having one hell of a hard time. Here's a small sample (the major league rank is in the parenthetical):

And remember those mid-90s Inside Edge scores for Adams and Uehara referenced a few paragraphs ago? Feliz graded out at 35.0. Ugh. He finished last year with an overall A grade; until now, his 2011 has been more on the order of a C+/B-. My post from last week covered the intangible concerns associated with Feliz, so I won't rehash all that here. In terms of measurables, Feliz's performance has suffered from unstable fastball command and the near-complete absence of a credible threat from a breaking pitch, let alone a change-up. Feliz says he throws a slider, but in terms of velocity (78-81) and break, it looks more like a dinky curve (I cannot stand the word slurve). The various pitch fX databases reflect similar confusion since one catalogs it as a slider, another as a curve and still another as a sinker (which is absurd). Under the circumstances, it doesn't matter since he can't throw strikes with it -- the league-average strike rate for off-speed pitches is 61%; Feliz is at 44%.

All that said, absent a medical issue, the talent is clearly there, and we've seen Feliz flat-out dominate before, including some flashes this season. That would include yesterday's 9th inning in Detroit, for which he got rave reviews: a 1-2-3 inning with a pair of strikeouts. More often than not this year, Nefti's pace has been anything but urgent; taking his sweet time on the mound, strolling off the back of the bump between pitches, picking at the grass and thoughtfully distributing little bursts of Copenhagen flotsam (especially if he's flirting with trouble). Yesterday, his rhythm was crisp -- I think he was back on the rubber for every reload from Mike Napoli. One thing hadn't changed though -- even though he was all business, it was still very much the fastball business. All but one of his 16 pitches was the number one (96-98 mph), and his only deuce almost brained the bat boy.

Thankfully for the Rangers, if Feliz continues to struggle, both Uehara and Adams are more than capable of closing. If one of them has to, the bullpen won't be quite the weapon it was touted to be in the immediate wake of the deadline trades, but at least it won't be the dumpster fire it was before they arrived, either. Hopefully, the arrival of two closers-in-waiting will be the kick in the pants that Feliz needs to get it in gear.

Adams's primary weapon is a devastating cutter (87-89 mph) that makes him almost equally effective against lefties or righties with a 91-95 mph fastball, a slurve (dammit, I said it) and a blue-moon change-up. With good command, the Adams cutter is described by scouts as being every bit as good as Mariano Rivera's (Yes, I just said that.) For his part, Uehara doesn't throw as hard, but has a filthy split fastball (some scouts call it a true forkball, which is almost unheard of these days), hits the corners with 2 and 4-seam fastballs and throws the bender. What's most impressive about Uehara beyond the splitter is that he changes speeds extremely well on ALL of his pitches. As a result, he effectively turns four pitches into eight.