College football fans are a naturally unsympathetic bunch about the decisions coaches are faced with every day. Don't tell them about the delivery - just show them the baby.

Preferably wrapped in swaddling blankets, smelling of peaches, and cooing mildly. And if the whelp is ugly, it may get exposed on a cliff.

However, what I'm going to detail isn't senior linebackers who bled for the program or DJ Monroe can't get the ball because he doesn't know the playbook. And the answer isn't a simple," Just play the best players." Because the response to that edict is Where? And Who? And When?

I'm going to detail a real honest-to-God conundrum. One deserving of your sympathy. In the next few days, Stacey Searels will make decisions on our offensive line, armed with incomplete data, hope, and no reasonable means of projecting with certainty, that may determine whether 2011 is a rebounding success or a disappointing mire.

What he decides could be the difference between 7-6 and 10-3.

When Searels arrived in Austin, he found an OL with minimal experience, some long term projects that can't help him now, a write-off or two, a collection of random scholarships assembled with no marriage to an actual system, a bad S&C base, wild ranges in baseline ability resulting from a recruiting model predicated on who would say yes rather than ability and fit, and years spent in a system that robbed players of natural aggression and eroded skill.

The good news was also a form of bad news: We have some good players, but some of the most promising athletes might be playing out of their natural positions. Stacked up at guard while offensive tackle lacks bodies and competition.

Our problems aren't just talent or experience-based. They are logistical.

Best embodied in a player like Mason Walters. We've documented Mason's snaps at OT over the last few practices. Take heed. That's not just a means of goading our current OTs into better performance or building depth. It's a bet and Searles is wondering if it's one worth pressing. 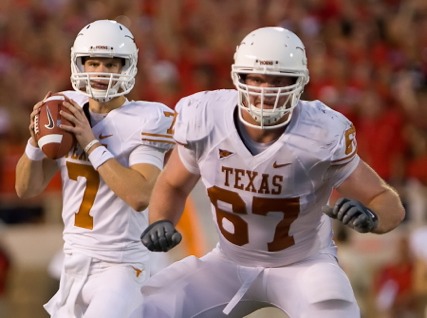 Walters is 6-5.5, 305 pounds, built like a brick shithouse, aggressive, with a good base and solid athletic ability. And he's playing guard when his baseline attributes scream for at least an audition at offensive tackle. Except that he hasn't played tackle. And our season is three weeks away.

The Dilemma is this: Is it better to spend the next three weeks repping Mason Walters (or anyone else) at a position he hasn't played in hopes that he catches on in time for the football season - our best case for upside for total OL performance and depth distribution - or does Stacey stick with developing the offensive tackle talent at hand knowing that Walters is a proven asset at guard?

It's a brutal zero-sum game.

Snaps taken away from Paden Kelley, Luke Poehlmann, or Tray Allen going against our first team DEs hamper their own development and hamstring their confidence and ownership. It affects unit cohesion - the sum of the whole and how players work together in concert. It robs mental reps and comfort that you need so you don't go offsides on 3rd and 2 against OU. It's easy to argue for upside (as I generally do), but that argument rings hollow when it's August 25th and you realize that Walters isn't going to cut it outside after two weeks of repping him there. That's a sphincter-puckering moment for an OL coach and the second guessing will start with Mack Brown and end with Joe Internet Fan.

Offensive tackles are more important than guards and centers. Markedly. I point you to a NFL pay scale should you care to disagree. And it makes little sense to play your best three OL inside if you further believe that Thomas Ashcraft is starter quality and Dominic Espinosa is good enough to deserve reps while freshman OG Sedrick Flowers may be a college-ready man-child. Guard is a place where good enough gets by much better than tackle. A dominating guard is a great boon to the running game, but a dominating offensive tackle is the second most valuable athlete on your offense. What sense does it make to layer talent inside at a commoditized position when your premier OL positions are average, depthless, or subpar? Doesn't it make sense to at least see if Walters can do it?

From where I type, the answer isn't simple.

Players don't grow or catch on at predictable rates. As often as a player experiences incremental improvement, you can also see the light turn on one day and the player raises his game by a leap rather than a tick. So you never know when to call off the experiment. Because literally the next day, it may have all come together. How would you like to manage in that environment?

You also know that the guy before you was dumped, the pressure for results now are intense, and the first six games of the Longhorn schedule, if mismanaged, could result in a 2-4 start with your unit as the primary focus of blame.

It's one thing to walk a curb without falling off. It's quite another to walk the same curb 500 feet above the ground.

Beyond Walters, this conundrum applies across our OL. Trey Hopkins' versatility is a boon and a curse, David Snow may be a better guard than center, we're not sure where Tray Allen best reps, and our choice of starters has to be made keeping in mind what best serves the entire unit both in drills today, but where we think they'll be in October and beyond.

That's a crystal ball none of us possess, much less our coaches.

Good luck, Stacy. If you go for the upside and it doesn't pan, we've got your back.