Share All sharing options for: Stick a Fork In It...

...it looks like the Aggy's goose is cooked. The SEC votes against an invite to A&M, per ESPN.

Now, this doesn't preclude a future move for Aggy. Maybe even a near-future move.

But what it DOES make clear is that A&M will need to bring all the significant players to the table - the Texas schools, the SEC, the Big XII, and the TV networks - in a sober and professional manner and construct an exit strategy that everyone can live with. The SEC wants no part of Aggy's burn-your-bridges-and-run-for-it negotiation strategy. That makes the SEC look like enablers, and opens them up to possible lawsuits.

Before I turn this over to comments, I want to make a couple additional points.

First: Aggie commenters have been worthwhile and valued contributors to this community. Not ALL of them, obviously. But guys like Kilgore Trout, EnglishAg, ColoradoAg, and even sometimes Ag_in_TX have added a lot to the BC experience. Sorry, incidentally, if I've left anyone out.

So I'd like to mend some fences with a couple of observations that I think are fairly indisputable:

1) Texas A&M is a valuable member of the conference and the SEC wants to have them, and they should want to have them. The SEC's reticence here is entirely about the baggage and not about the passenger. A&M brings a major upgrade in academics, a fierce fan base, a super-solid football tradition, a matching embrace of southern oddball culture, and Texas recruiting and TV sets. From a financial point of view they're just as valuable a member of the Big XII as Oklahoma. Dan Beebe is probably breathing a lot easier today.

2) Texas A&M will be would have been a competitive member of the SEC. By "competitive" I mean just that: they can win games. The 2011 Aggies would be a tough out for any SEC team; I figure the only one I'd clearly favor over A&M this year is Alabama. And the Ags could do quite well in the SEC in the other major sports, at least as well as they've done in the Big XII.

That being said, I still think the move would have been a bad one for A&M in the long run. "Competitive" isn't a formula for becoming a kingpin; "dominant" is. And the Big XII is a MUCH better platform for establishing dominance, especially RIGHT NOW. UT is coming off a lucky 5-7 (could have easily been 3-9) and there's no better time for the Ags to put together a couple more ten-win seasons. Texas has plenty of off-the-field recruiting momentum...but let's be frank, that doesn't mean squat if the wins aren't there. If the Ags establish themselves as the better bet to win, year-in and year-out, that could change the recruiting and money maths in a major way. Let's put it this way: if A&M became a regular threat to go to the BCS, don't you think they'd get their own network too?

Plus, there's the smarmy SEC recruiting downside. And there's more, but I can confidently leave that up to the commentariat to explain. 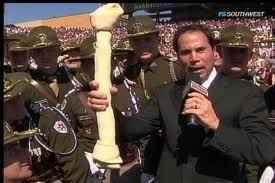 You didn't get the shaft, Aggies - you got a YUMMY RAWHIDE BONE! See? Yummy!