There is a misunderstanding that needs attention. Whenever this happens, we dispatch a few Barkers to clean it up the problem quickly and efficiently like Harvey Keitel, except we are clothed. ~V

A hallmark of many primitive cultures is the prevalence of the threat display. From Germanic tribesmen banging their axes at Maxius’ legion to Maori tribesmen dancing the haka to Triple H climbing the turnbuckle and spitting water into the crowd, these displays are designed to evoke a fear response from a potential adversary. Some primitive cultures still thrive today, and occasionally one of their members becomes technologically conversant enough to conduct such a display online. Its message? That Texas, weighing its options in the face of college football’s Realignmentocalypse, is eschewing the SEC for one reason only - because we are afraid of them. It features a bevy of logical fallacies, anthropomorphic aspersions, and insults that would qualify as sophomoric only for someone who had sustained a major brain injury during their freshman year.

Also, willfull ignorance of the 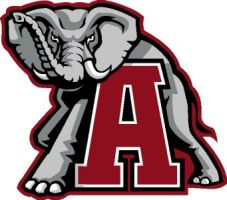 in the room on this issue, but nonetheless purports to have built an airtight case that Dodds, Powers and the rest of Texas’ shot-callers are quaking in their boots at the prospect of matching up with the Dunces from Dixie.

On Wednesday, Matt Hayes, of the surprisingly still active Sporting News/AOL dial up Sports Desk, penned a similarly desperate column that opened with what I can only assume was the result of an intra-office contest to write the worst sentence in sports journalism history:

No matter where you are on this ever changing, wildly uncertain, mildly entertaining ride we call college football expansion, we all eventually get off on the same stop and stare.

That day is today—at the corner of burnt orange and karma.

Bleacher Report would like to offer Ten Apologies for Why We Didn't Think of This Mixed Metaphor Joy Ride Disaster First. 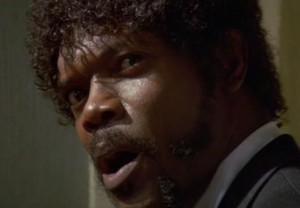 Jules, knowing the difference between a tasty burger and a shit sandwich, is not impressed with these offerings.

Let's begin this slideshow, shall we?

Imagine Nancy Grace and Joe Dirt as the main characters in a Carl Hiaasen novel. Okay, now you're in SEC Country, where the bar is set very low for humanity but unreasonably high for sport. An enterprising, mustachioed young humorist named Orson Swindle capitalized on this social disconnect in the form of fellow SB Nation property edsbs, perhaps the Internet's finest college football blog.

Onward through the swamp ...

If Texas represents a public Ivy, the SEC is more like mongoloid kudzu with creepers of academic sub-mediocrity strangling the meaning of a college degree, this fact quickly evident in any conversation with an SEC graduate working in your mail room. Apologies Florida and Vandy - we're not talking to you. It's not that Texas and Mississippi St represent different cultures; it's that they may actually represent different life forms. We'd dart you and release you into the wild for further study, but we know the tracking beacon predictably ends up at Applebee's Happy Hour and a child support hearing. At least LSU is fun in their stupidity. "Awww, judge, cher, you know I spent dat money on a cayenne rub at da titty bar. Dem kidz can et da crawdadz if dey hon-gree."

We observe the rules of Captain Kirk with respect to alien life - we will violate your women enthusiastically, but you're not coming back to the starship with us. 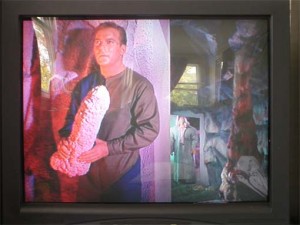 Baton Rouge was fun, but I've really got to get this thing looked at.

A basic understanding of that universal principle is all that's required to understand why Texas has spurned the SEC's open invitation for two plus decades. If the SEC has hurt feelings about our refusal to settle down with you on Planet Humid Retard instead of explore new revenue galaxies and boldly go where no man has gone before, well, tough shit?

If I want your opinion, it will be limited to the realm of landscaping solutions.

I do think the academics argument is way overdone, but this was an enjoyable opportunity to remind SEC fans that you're the weakest-chinned collection of groupthink lackwits to ever walk the planet, largely deriving your identity from the exploits of teams other than your own (i.e. whichever program isn't on crippling probation at that moment). Further, your male fans wave pom-poms while sporting emo bangs. If you did that in West Hollywood, gay men would bash you for being too over the top. And an alarming number of you speak like Zach Galifianakis' fictional twin brother, Seth.

You cannot deny the truth of any of these claims and I demand you refute each of them with evidence and passion, preferably in ALL CAPS with numerous mis-spellings and misuses of SAT prep words.
(troll sequence completed)

It is impossible to separate a cube into two cubes, or a fourth power into two fourth powers, or in general, any power higher than the second, into two like powers. I have discovered a truly marvelous proof of this, which this margin is too narrow to contain.

This proof is more commonly known in schools of higher learning, outside the SEC, as Diophantus' sum-of-squares problem, published in the 1637 edition of Arithmetica. It was in the margin of this text that Fermat scribbled his famous Last Theorem. This kind of shit only happens in Good Will Hunting. Most ideas scribbled in margins are simply forgotten, lost, or were never worth a shit to begin with, and it will be in the margins of college football history (it's a huge book) that the SEC's fate will be similarly written, their majestic decade of the Oughts all but forgotten once the era of Super Conferences leveled the playing field, and the NCAA finally enforced a fifth grade reading level in order to be an eligible student athlete, or a coach, in Les Miles' case.

So no, SEC fan, we're not scared. Or skeered. We're just smarter, richer, and better looking. This will all make sense when The Longhorn Network buys ESPN next year, Texas and Notre Dame form a new conference -- THE BIGGEST TWO -- and whoever wins that one contest automatically plays in the BCS title game.

Against Florida, Alabama, LSU, or (insert badass SEC school that could beat the worst NFL team by 9 TDs here).

Welcome to the final frontier of college football at the corner of burnt orange and karma.