Will Longhorn Network Be Served A La Carte?

Share All sharing options for: Will Longhorn Network Be Served A La Carte?

As the drawn-out negotiations between ESPN and various distributors continues over the Longhorn Network, there are new indications that more may be in play than just the subscription price ESPN is asking for. Recent reports state that for the first time some major distributors are actually contemplating letting customers pick and choose what channels they pay for.

All distributors have held steadfastly that the only way to keep monthly subscription rates stable was to "bundle" stations on the basic services and charge extra for the premium fare. The idea was that while customers got more stations than they watch on a normal basis, they were provided the local channels along with a smorgasbord of other channels to pick and choose from at a reasonable price. It provides what is known as the "option value" where a viewer gets to roam with the remote and every once in a while stumble upon an interesting show on the History Channel that catches their eye.

But executives at Time Warner and other major carriers are now saying that carriage costs are skyrocketing – even for the basic network channels -- and that it is time to change their business model.

There is a healthy debate to be had on if the a la carte method would reduce the average subscriber’s bill (I don’t believe it would), but that’s not a debate for today. Instead I want to focus on how going a la carte could dramatically affect the revenue stream for not only the LHN, but for every other regional network such as the Big 10 Network and the multiple Pac-12 channels.

It is a concept that will be fiercely contested by programmers, and it may take years to put into place – if at all, but it is a fight that distributors and programmers are ready to engage in.

As the pace of change in media quickens, more people are ditching their cable or dish to receive their video over the internet, mobile devices or game systems. Time Warner Cable and Comcast – the two biggest cable distributors in the nation – lost a total of 1.2 million subscribers in 2010. That is a relatively small number when you take into account that there are still over 100 million households hooked up to traditional TV outlets. That number is expected to increase in 2011, and it has the attention of the major distributors. Time Warner, Comcast and Cablevision have already introduced their own video streaming apps for mobile devices and they will continue to expand their delivery systems.

They also blame the bad economy and their rising costs to the loss of customers. The distributors are bound by law to carry local over-the-air network affiliates, and they have recently had to start paying retransmission fees for the networks. But there is one major programmer who is really making the distributors nervous.

ESPN is the 800-lb gorilla in the room, and up until now they have pretty much set the rules for distribution. ESPN gets $4.69 per subscriber per month from every distributor – almost 3 times what any other channel can command. When you "bundle" ESPN2, ESPN News, ESPNU and ESPN Classic together it means that ESPN is collecting well over $5 per subscriber per month before selling a single advertisement. That was bad enough as far the carriers were concerned but then the new Monday Night Football deal was announced.

ESPN put up $15 billion for an 8-year extension to its Monday Night Football contract.

In a little over a year, ESPN has shelled out billions in new contracts for the BCS, Pac-12, Wimbledon as well as Monday Night Football. It is expected that in their next round of negotiations with the cable distributors that they may want as much as a 10-15% increase in that $4.69 monthly rate.

Time Warner is making it clear that they are serious about looking at trimming their basic bundle of stations. They are experimenting in 3 of their markets on the East Coast with a "TV Essentials package of stations – excluding the ESPN channels – for $30-$40 a month.

Meanwhile the Dish Network is in negotiations with ESPN on a carriage renewal deal and they are playing hardball. They want to move ESPN and its entire family of networks to a separate tier from the basic package – and charge a premium rate for it. Dish has already dropped several of the regional sports channels in the New York area because they wouldn’t move off of the basic tier, including the YES Network and the MSG channel. Their contract with ESPN runs out at the end of 2011. 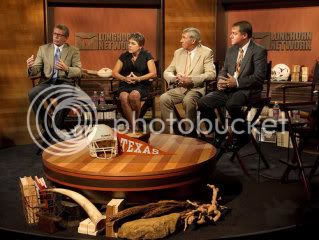 What This Means For The Longhorn Network

Right now the LHN has limited exposure as the two biggest carriers in the State – Time Warner & Comcast – are holding out, believing that ESPN’s asking price (a reported 40 cents per subscriber) is too high for the basic cable tier. The ESPN/LHN business model is built around getting on basic tiers in Texas and the surrounding states, while being offered as a premium channel elsewhere around the country. Time Warner may be the toughest holdout, since they seem to be the strongest proponent of the a la carte method. TWC and DirectTV have already contacted FCC Chairman Julius Genachowski about retransmission fees, and about "unbundling" channels for a stripped-down basic tier to be made available to subscribers.

One factor in favor of ESPN and the LHN is that Comcast, the largest distributor in the state, just happens to be in the programming business as well. Comcast now owns NBC, Versus and the Golf Channel among other properties, and they have agreed to not force ESPN into an a la carte scenario on its systems.

October will be a key month in this fight, as it is the heart of "retrans season" when a majority of the agreements with the networks and major programmers come up for renewal.

Bottom line for the LHN is I wouldn’t expect the lure of the live broadcast of the Kansas game to move the negotiations along. For now the Longhorn Network is just a sideshow in the struggle over just what kind of menu should be offered to TV subscribers.