Share All sharing options for: Texas/OU Sundry: 24 Hours to Kickoff

You'll always be Uncle Rico to me you slack jawed Okie

Some stats from ESPN with a little fuzzy math but Manny Diaz sees right through it.

Jones is completing 84.2 percent of his passes out of the pistol formation and has a passer rating of 224.2 in the formation.

Think Diaz has a plan? I do. FLUSH JONES OUT OF THE POCKET ALL THE WAY INTO THE LOCKER ROOM DOWN A COTTON BOWL TOILET.

Just curious, who is OU's backup QB? If we get steady pressure on Jones, UT wins. If we don't, we lose. Football really is a simple game.

Last season, Texas completed 23 percent of its passes of longer than 25 yards; that number also includes a 2-of-7 mark with Garrett Gilbert this season. Since Gilbert was benched, Case McCoy, David Ash and John Harris have combined to complete 6 of 7 passes longer than 25 yards.

Texas RB Malcolm Brown is averaging 6.4 yards per carry when running outside the tackles, and six of his 23 attempts have gone for longer than 10 yards.

Five of the nation's 15 undefeated teams are in the Big 12, the most of any conference. Oklahoma, Texas, Kansas State, Texas Tech and Oklahoma State are a combined 20-0.

Not bad for a conference thought to be on the brink of collapse. Now make up your minds, Mizzou. IN or OUT. You'll be surprised how little the rest of the conference cares what that decision is, we just want you to make one. The Tigers started this realignment plate tectonics shit last year by flirting with the Big 10 and they're still the last team uncommitted to the Big 12. Can we just kick them out on principle? And then hire Gary Pinkel as an assistant special teams coach? 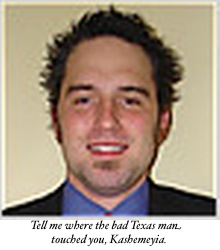 The Dan Jenkins of the modern sportswriting era - honorary OU grad Thayer Evans - actually penned a nice little piece on Bryan Harsin. Of course, a fifth grader could write about Harsin's athletic sock collection and I'd probably find some value in it. I want to know everything about Bryan Harsin. Is that healthy? Just when I think it may not be, I think of what keeps LonghornScott up at night and I feel better about myself. Would Diaz' Fire Zone Blitz modification X gap 5A Deep Purple stop Harsin's Inside Zone play action double cross TE post hook and ladder if simulated 10 times? You and I are not like him, but just be glad he calls our Zoo home. Petting hours are from 9-11 on Sunday.

Brent Venables isn't sleeping well either, but it's not from the increasingly unsettling game film on Harsin's offense. Our OU insiders say he has bleeding hemorrhoids that could affect his 4th quarter playcalling. Just something to keep in mind if he keeps blitzing safeties while we repeatedly burn OU down the seam with a tight end. It may not go the distance but it's only because DJ Grant isn't as fast as Jermichael Finley.

After a year as a graduate assistant, Harsin was promoted to tight ends coach and started to become close with then-offensive coordinator Chris Petersen. Petersen gave Harsin increased responsibilities in Boise State’s passing game, which he handled meticulously.

"We were ready for just about anything the opposing team would throw at us," Moore says.

Moore and Wilcox recall Harsin being just as detailed for practice. On the first day of preseason camp, Wilcox says, most teams’ offenses traditionally line up with two running backs and one tight end in one formation.

But when Wilcox was defensive coordinator at Boise State, Harsin, on the first day, had four different groups of personnel, an empty backfield and plenty of shifts and motion.

I think it's safe to say Bryan Harsin has exceeded every possible expectation through four games. And that won't change with a loss to OU and/or Okie State despite what you may read on a live game thread. It's a nice feeling to know the other team's coaches are probably more nervous than yours, is it not? Bob Stoops is going to send Greg Davis a 20 lb box of Omaha Steaks on Sunday as a belated gesture of gratitude.

And while we're just half way through this season, it's hard not to start thinking about what this offense might look like next year. I envision every single drive resulting in a touchdown with zero turnovers in an undefeated season. And you? Given what we've seen so far, those seem like perfectly reasonable expectations.

You might even be able to watch those highlights on the Longhorn Network by then.

In the meantime, let's steal one from the Sooners with a little trickeration, misdirection, power, clutchiness, opportunistic defense, and some good old Cotton Bowl luck.

What time is it, Bones Jones?