In arid Botswana, the local currency is known as the pula - the Setswana word for rain - a demonstration of both value and infrequency; a prayer and unit of exchange joined in a fusion of practical aspiration. Farmers and financiers obsess over pula in its myriad forms, suggesting the congruence of commerce to the rhythms of the seasons and agriculture to the harsh reality of the market.

Not unlike Austin, Texas, where the aspirational currency of Longhorn football - the touchdown - has been in a state of drought. The end zones are a cracked furnace of dry earth, Bevo is sucking on stones and shoe leather, and Major Applewhite made a Dune stillsuit out of old football equipment and Gatorade bottles to recycle his urine into a palatable, potable form. Schmidt's malt liquor.

Damn. How we gonna make it rain up in here, y’all?

Unfortunately, San Diego is a desert too.

The California defense isn’t going to seed any clouds for us, but we may be able to turn partly cloudy into a light drizzle of offense if our QBs can play at a C level and our young running backs can manage a pre-game trainer approval. Hint: lie to him. You have a whole offseason to heal.

The Berkeley Trotskyites run a 3-4 defense, bathed in patchouli and solid interior run stopping. They’re not particularly great in the secondary, they’re inconsistent at OLB, but their middle 5, the core of their defense, the triangle of three interior DL and the two ILBs behind them, is pretty damn good. Sadly, that's exactly where I'd want to be good when facing Texas.

Cal's defensive performance hasn't operated with much rhyme or reason this year - they played great against USC, were dominated by Oregon and LaMichael James (who ran away from the Cal secondary like they were a TAKS test), got pantsed by UCLA (you can only hope to contain Kevin Prince!) and Arizona State and struggled early in the season against the vaunted Colorado passing game, mostly because their secondary kept blowing coverages.

If there is one common thread it's this: they stop the run well between the tackles against conventional sets, legitimate option teams run the ball well on them, they're pretty good at closing out teams who insist on getting behind the chains, and their secondary - though mediocre - doesn't give up too many big plays anymore.

Sometime after the UCLA debacle, Jeff Tedford decided that if he stopped putting Cal's defense in bad spots by throwing Zach Maynard 35-40 times per game, they'd have a better chance to win. He was rewarded with a 3-1 finish, the only loss by 3 points to Stanford. He may just be on to something.

Guyton, Tipoti, and Owusu are effective interior DL in Cal's 3-4 scheme and do a nice job of keeping Cal's defensive stars at ILB clean. They're not prototypical giant 3-4 DL - they go 280, 290, 270 - but they're active, athletic, and play with a good pad level. Guyton is the class of the bunch and was a 2nd team All-Pac 12 selection with 4.5 sacks and 10 tackles for loss. Rangy (6-5, 270) Ernest Owusu is probably the most athletic of the the three and that's reflected in his 4.5 sacks, but he's also the softest straight up against the run. Tipoti is the prototypical nose tackle - low base, good leverage, creates stats for the guys behind him more than himself. Dominic Espinosa has struggled with true nose tackles this year and Tipoti is that.

ILB is a major team strength, featuring Pac 12 Defensive Player of The Year Mychal Kendricks and long-time starter DJ Holt. Kendricks leads the Bears in tackles (96), tackles for loss (13.5), and also grabbed 3 sacks and 2 interceptions. He's the best interior LB we've seen all season. He's complemented by DJ Holt, a veteran ILB who finished second behind Kendricks in all meaningful tackle categories. They both go 6-0/6-1, 240, do a great job of snuffing out interior run games, and are athletic and instinctive enough to make disruptive plays in the passing game. It should be noted that Kendricks is a converted OLB and I wouldn't be surprised to see Cal toy with him as a pass rusher lined up in different spots on our many, inevitable 3rd and longs.

Cal's OLBs aren't particularly experienced and haven't put up much in the box score this year. Sophomore Dan Camporeale and freshman Cecil Whiteside are joined by Chris McCain (missed latter part of season with injury) and their collective performance has been a disappointment for Bear fans. Whiteside has shown some natural ability as a pass rusher and given the frequency with which Texas finds itself in 3rd and long and our inability to show much composure in the pocket, it's not inconceivable that a Cal OLB has a coming out party as our QB blindly flushes into their pass rush like a quail. I'd like to line up in our jumbo set a few times and make their young LBs prove they can hold the edge. And I'd expect liberal use of DJ Monroe on the jet sweep.

Cal's DBs are completely average, which means they're several rungs above the terrible Baylor secondary that gave us 2nd half fits. Their DB coach was fired last year and though they showed marginal improvement this year, they may be dealing more with talent deficiencies than bad Xs and Os. They'll play zone and won't break out of it until you make them with accurate throws. So that's a problem.

Look, our passing game is so pathetically remedial in its execution that I'm not going to break down personnel or talk about opportunities. Basically, if we throw a ball right to them, I suspect they'll catch it. If we throw the ball to our open receivers, they're exploitable. I'm not going to make any predictions on what our bottom 10% of FBS QBing personnel group can do against anyone.

I made the mistake of watching Boise State last night. Mostly, I just shook my head at a team running our exact offense and executing the easy throws that are available all over the field and how that opens up the interior running game and the various trick plays we've all grown accustomed to watching. They even have better OTs than we do. I'm sure Bryan Harsin is still in shock that our passing game personnel can't execute the gridiron equivalent of lay-ups, but I'm sure he'll continue to keep pulling the trigger, hoping for a friendly roll.

If you like to simplify things, Cal's best three defenders line up at ILB, ILB, and DE and each excels at disrupting the running game between the tackles. So if you're counting on us lining up and "just pounding them", good luck with that. Similarly, although it's exciting to contemplate that Oregon and UCLA killed Cal running the option, what is a nice little offensive look for us is each of those team's core offenses. There's a difference there in execution level and general slickness that's significant.

There are plenty of ways a reasonable offense could exploit this Cal defense, but the improved health of our running backs isn't particularly meaningful if we can't hit an open 8 yard stop route or punish Cal over the top if they line up a 220 pound safety on our slot receiver. I have little doubt that Cal can stop a one dimensional running game. The definitive film on how a 3-4 defense can stop the Texas offense is out there and it was shot in College Station, Texas. Pinch inside, play some zone behind, and bring pressure on 3rd and long. Rinse, wash, repeat.

Our best hope on offense is a marginal improvement in our QB play, risk-averse, turnover free offense, and touchdowns over field goals in the red zone when opportunities present themselves. 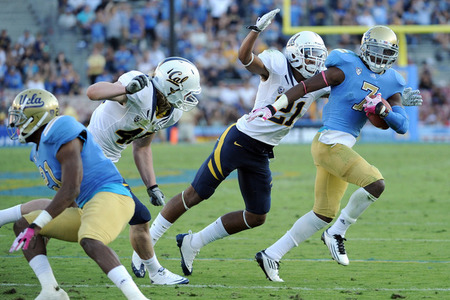