Panning for gold in a Red River of sewage.

The real post-mortem was written on Sunday evening. The extinction of entreaty, hoping, and excuse-making. And for many of us, the end of an era. At least that's clear to anyone outside of Bellmont and Mack Brown's inner circle.

I wrote the pre-mortem a week ago, offering my pessimistic view about our prospects in the game based on the series history under Brown. And it offers the only piece of fundamental analysis required to really understand the game: Mack Brown is on our sideline, Bob Stoops is on theirs. Though I could imagine scenarios in which Texas might win, evidence, history, and good judgement said otherwise. 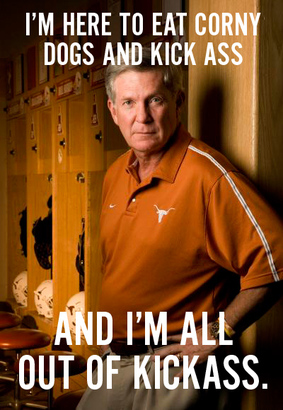 Nickel Rover and Nobis60 did a great job of sifting through the rubble and re-enacting scenes from The Deer Hunter, so I'm not going to rehash the game in this post-mortem exhaustively at each position or look at schemes, because that misses the real point. Basically, everything I wrote about before on defense, happened again, with the added negative 20% Mack Brown Red River Potentiating Factor. And we had the added bonus of Bryan Harsin's offense not coming to play, partly because of tepid game planning and horrific execution, but also because they're not immune to the inestimable psychic weight of Mack Brown setting the tone and tempo for that week's preparation. Our entire offensive line just didn't show up. And several skill position players were listless and weirdly unfocused.

My point is: we didn't lose the game on Saturday - we lost it on Monday. In the Spring.

An OL that had shown great improvement from last year, regressed at every position. OU whipped us with four, got intense pressure on almost every passing down with basic sets, and killed any semblance of a running game. There were more unblocked Defensive Linemen delivering hits to Texas skill players in this game than in all of our games previous. That's how you rack up skill position injuries and why the Texas backfield has been an infirmary since 2007. Did the OL really regress at every position simultaneously or is this just more Mack Brown OU BS? The latter more than former, I suspect.

The offense is a contextual creature that succeeds when we can dictate down, distance, and tempo. Put us in catch-up mode, particularly when we can't dictate protections, and it gets ugly fast when the receivers won't catch and OL won't block. And, unfortunately, one of the reasons that we were in catch-up mode is that our defense predictably sucked, but the "regular" offense never helped itself, with multiple three and outs. You've got to help you, to help you.

The 95 yard Oklahoma TD run Both the 95 yard TD run and Millard's wildebeest stomping gallop were instructive in showing all of our defensive deficiencies:

1. None of our DL made the play in the backfield. So now we're in trouble...

2. We're in a base 4-3 with DeMarco Cobbs as SLB. Diaz decides to load the field with the position that he can't coach and that won't perform. This is why fat women wear half-shirts.

3. Steve Edmond runs under the play for no reason at all, not even understanding the basic rules of pursuit. He's still in gap monkey mode, even when that's not longer his tasking.

4. DeMarco Cobbs is destroyed play side because that's what happens to him when he's play side and can't just chase things. Touchdown.

5. Steve Edmond loses him on a simple play action toss.

6. On the sideline, Mykkele Thompson lays down at the runner's feet in hopes that he can speed bump him into slowing down through his declared school zone, while Adrian Phillips attempts to shove him (and gets run over sideways somehow). 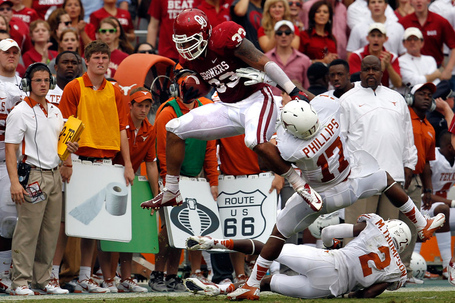 7. This is a really badly coached defense.

Because we don't have a defense. We have a series of calls. These guys are playing in parallel, not as a cooperative unit. It's not so much a defense as an early autism diagnosis. This is a historically bad defense...that will place several of its members in the National Football League.

Fundamentals allow mad scientist schemes to work. Diaz is trying to build skyscrapers on straw. I've written all that needs to be said in previous Post-Mortems and if you still think this is all about Jordan Hicks, then Bellmont, Mack, and Diaz thank you from the bottoms of their confused hearts.

63-21 was jarring, but I'm resigned to a new future, even while we cope with the messy present.

So what bright spots can be had from this game? None from the coaches, I'm afraid. But there were a few players.

13 of 29 for 113 yards and 3 turnovers is not exactly a stat line of sunshine, but Ash proved a great deal as a competitor and tough-minded athlete. He had six passes dropped, was nailed every time he threw the ball - usually by a Sooner DL with a clean shot, shrugged off OU tacklers on four different occasions in the pocket to keep a play alive, and fought for every minute until injuring his wrist.

David Ash did not play well against Oklahoma. He pressed late. But he played really hard and showed a lot of competitive spirit. And I think we've got a QB.

Just months ago, Davis would have sulked through the game, blamed his teammates and pondered some injustice of how the offense was wronging him, but instead he kept battling. 5 catches, 89 yards, and 1 TD doesn't mean much in a game that Texas loses by six touchdowns, but I saw him compete on every down.

5 tackles, 3 for loss, 1 sack, 2 batted balls, and maniacal effort on every snap before going out of the game with a terrifying injury. Is it just coincidence that a player with no understanding of the rivalry and very little time in the program played the hardest and best of any of our defenders? He picked up on the intensity in the air, felt the energy of the crowd, heard the trash-talk flowing from the Sooners, and decided that he was going to get in a fight.

He behaved like a good player in a big game.

Quietly turned in a solid performance. He leads the defensive tackles with 20 stops for the year and he's tied with Brandon Moore for tackles for loss over the season. I can't fault his play at all.

10 tackles, a pick 6, and good effort throughout. Diggs also played reasonably well for most of the game, though I'm not sure if our inability to match the blitz with the coverage is a player processing issue or more of Diaz's irrational cuteness.

Alex King got plenty of punting duty last Saturday and he made the most of it. He averaged almost 50 yards a kick. Would have preferred he not take the field.

The history after this game suggests that Mack Brown will coach the team and his players will realize that extended public humiliations don't feel good when they have to return to class on Monday. Mostly, they'll learn they need to motivate themselves and find their own leadership.

Could we crater? Sure. This is a very different Big 12 from the one Brown dealt with for much of his career. And our fundamental issues on defense aren't going away anytime soon. Losing Jackson Jeffcoat doesn't help much, and sadly, it gives the coaches another excuse to peddle.

Could we still have a respectable year and go to a bowl? Yes. There's talent on this team and we had seen notable improvement from our offense before Dallas.

In any event, it's time to move on to Baylor.