Mack Brown has asked the team to move on, to not let a loss to OU beat us twice. He's digging deeper, working hard to FIX THIS (for the fourth time). To make sure we don't get embarrassed again. Does all this sound way too familiar? Does it make you want to punch a hole in the wall, burn your season tickets, and kidnap Will Muschamp?

Share All sharing options for: Adding Injuries to Insults - Plugging Holes in the Longhorns' Psyche and Depth Chart

I so wish this were satire.

But to the word, it's the exact same thing Mack Brown said in 2001, 2003, and 2011. He even jumped in and answered a question for Jeffcoat and Okafor in last week's post game press conference, just as he did for Chris Simms. Were there anything left in my bowels after last week's game, they would have shifted violently at this nauseatingly Deja Vu moment.

Even Major Applewhite, who vehemently despises all things Sooner, has imbibed some of Mack's Participation Brand Kool-Aid, delivering this gem to the Austin Longhorn Club yesterday:

Whether he actually believes that or not, it's obvious who he heard it from. It's basically another verbatim quote from Mack Brown and at this point these Post Annihilation Talking Points may as well be pumped through speakers in Bellmont year round. That kind of pre-loss emotional contingency planning comes in really handy when getting your ass handed to you, which was in the back of your fragile mind all along.

Mack said on the radio yesterday that he hasn't received ONE piece of negative feedback from any friends, family, or boosters.

And that's because he's insulated himself with a positive reinforcement feedback loop, going all the way up to Deloss Dodds. To hear Mack tell it, and yes he actually believes it, "This was just another game, a bad loss that the team will have to learn from and move on." 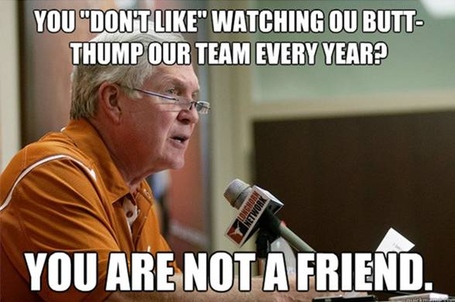 Bill Powers is the only one who can save us now.

It would be easier to process what happened last Saturday if there was a shred of accountability coming from anyone in Bellmont, but the Thought Police are out in full force, demanding positivity when faced with the delusional pragmatism befitting of a Tony Fucking Robbins seminar. Wait, didn't he speak to the team once?

So yeah, it's been a shit week to live in Austin.

And now the best team in the country is coming to town for the eighth week in a row.

As part of the Red River fallout, the Texas two deep is a mash unit, colored in crimson.

Sitting at 4-2 with the Dreamwagon sputtering on hot air fumes, I'm not going to call this game a crossroads, but this is Mack's Antietam, Waterloo, Zama, Stalingrad, Hastings, and Yorktown - combined.

Let's hope we see Texas Football tomorrow, regardless of who is temporarily leading us into battle.