The box score that made Magic Johnson weep.

The Twittersphere and blognoscenti are abuzz over Jack Taylor's record-breaking feat, his 138 point effort for Grinnell College, as they took down mighty Faith Baptist, 179-104. The mark shattered the previous NCAA scoring record and it won't be broken, until an even bigger dick in a fast break system plays an even more hapless opponent. The print media, ESPN, NBA leading lights like Kobe Bryant, Lebron James, Kevin Durant - even the New York Times - weighed in to praise or stand in awe of the record-breaking performance by this hardworking son of the heartland, never once mentioning the most salient point.

He's kind of a dick. 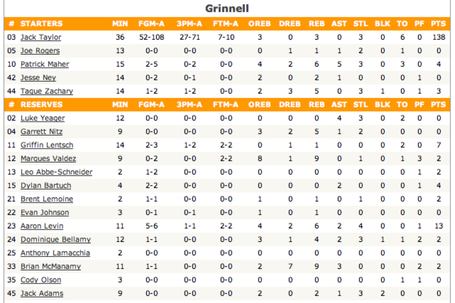 Taylor also finished a game in which 283 points were scored with zero assists. YOU SON OF A BITCH. How many times did he shoot out of a triple team instead of throw it to a lonely teammate standing under the basket? EVERY TIME, IS THE ANSWER.

To augment his 0 assist output, he also had three rebounds. Really, Jack? Really? Three rebounds? You miss 56 shots and you can't follow your own shot a few times? No defensive rebounds either, I see.

You've played pick up ball with this guy. Trust me. Remember him? He doesn't cover his man, hoping for a rushed, missed shot, one that he never sees, because he's already released when it goes up. He shoots pull-up three pointers on 3 on 1 breaks and, when he bricks it, screams at you for the ball. When he's scored on, which is always, he immediately responds by demanding the ball, crossing over three times, driving to the basket, dribbling it off of his knee, and screaming out, "FOOOOOUUUUL!"

Not that he ever drives the ball - Taylor only shot 10 free throws.

It should also be noted that he had only 58 points at halftime. He needed a 80 point second half to set the mark - in a game Grinnell would win by 75 points.

Let me suggest to you that somewhere around point 80, losing the game by 60+ points, with Taylor flinging up 3 pointers mindlessly on every possession, as a Faith Baptist player, I would have channeled the Old Testament version of my beliefs and thrown him into the trophy case on a breakaway layup a la Hoosiers. Was Grinnell playing Faith Baptist of Faith Hill?

Of course, this summed it all up nicely:

Taylor credited his teammates for their "unselfishness" throughout the record-setting outing.