Judging by the scores in week 1 you would probably be hesitant to call the league's traditional powers the frontrunners in the league. OU struggled to score on UTEP and couldn't stop their running game. Texas had a strong but not spectacular performance against Wyoming, while OSU, WVU, and Baylor combined for 212 points.

Generally, the main difference between OU, Texas, and everyone else in the conference is defense. Even when other squads have managed to build spectacular offenses, they haven't been able to survive the conference season and take down both OU and UT because of the sizable gaps on defense.

At least until Bill Young came to OSU.

Obviously both UT and OU's seasons will hinge on how their defenses perform this year. Oklahoma has the comfort of returning a senior QB who could have been a draft pick but all the talk amongst the Land Thieves has been about restoring Mike Stoops to the helm and seeing a return to the defensive dominance of the early aughts.

Consequently, UTEP running back Nathan Jeffery's 21 carry-177 yard performance had to be an eye opener for OU, as run defense wasn't a concern heading into the season. But that was before they lost Walker and McGee.

Meanwhile in Austin, our response to losing two linebackers to the NFL was to shut down the Wyoming rush attack and yield 9.9 pass yards per attempt, including two touchdown passes. Not what we expected.

Wyoming's offense, as you've heard, is all about creating alignment problems and favorable matchups. They hit the defense with endless Trips formations, which creates a lot of stress on linebackers and safeties in trying to honor run responsibilities and coverage responsibilities at the same time. One response Diaz gave was this: 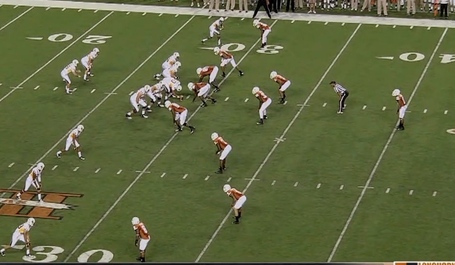 However, Texas has been playing more Cover 1 against these looks since the Kansas St game, with man defense on all the receivers and Phillips playing deep.

The goal is to avoid coverage busts AND prevent Steve Edmond and Jordan Hicks from having coverage assignments that distract them from playing the run. Then Vaccaro donned his superman cape. 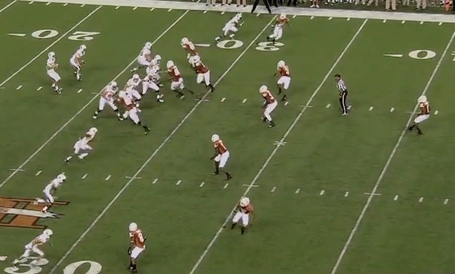 The ball is snapped and he's bailing to play deep coverage. Adrian Phillips is also backpedaling and Carrington Byndom is playing press-bail on the other side of the field to prevent the WR from getting past him. Diggs has his eyes in the backfield, a good indicator that he has run-force responsibilities in this coverage. 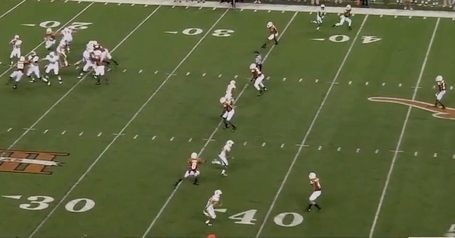 We can now more clearly see that Texas is in a 3-deep coverage. The problem 3-deep coverages have in general, and right here, is that there are four receivers running vertical patterns. The #3 is trying to get behind Edmond and Hicks while the other two are both heading into Vaccaro's zone. All he can do is split the difference between them and make a play on the ball.

Phillips has had to drift away from Vaccaro to bracket #3 in case Smith landed a pass over Edmond's head. Diggs has begun to backpedal as there are no other receiving threats but he's too far behind to impact the play. Smith has transferred his weight and is firing the ball to the #2 receiver who has a lot of grass to operate in with Phillips shaded over to support Edmond. Vaccaro has noted this and is headed there as well. 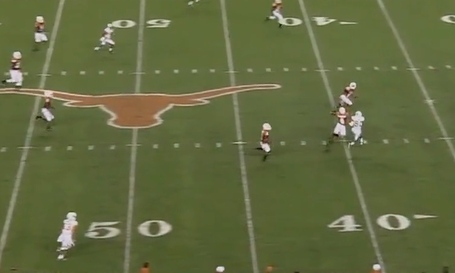 He makes up ground quickly and delivers a spectacular INT. You see that McShay? McShay! How many times are you going to watch that McCarron tape? Nevermind.

This coverage is very useful for facing spread teams that like to run out of trips receiver formations. The linebackers don't have to walk out to cover people (except Cobbs), and the athleticism of guys like Vaccaro make it possible to handle vertical routes and disguise the coverage before the snap.

Oklahoma St. can expect to see plenty of this unless Wes Lunt can make us pay more than Smith did.

There are weaknesses, some of which Smith exploited. Our linebackers are not trading off receivers up the middle very well yet and it's possible that a well placed throw by Smith to #3 would have yielded a big gain. I don't think that playing MOFC coverages (one safety deep down the middle) will necessarily replace our 2-deep coverages against spread passing teams that can light you up like WVU does but it's a very useful change of pace and a great weapon against spread-to-run teams.

Another answer for teams that can threaten the middle of the field with the passing game could be our dime, or Prowler package which we used in 3rd and long situations against Wyoming. It looks like this: 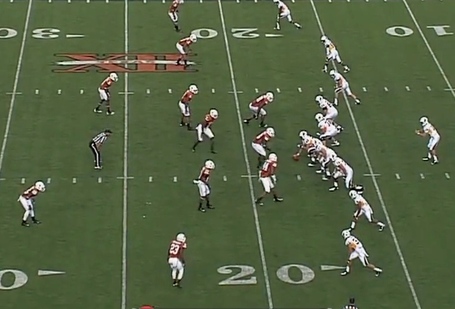 Jackson Jeffcoat, Alex Okafor, and a DT would move around on the line. Behind them we have Cobbs, Hicks, Phillips, and Vaccaro which comprise the linebacker corps. All are fast blitzers and very capable in space. Turner and Hooch man the safety positions with Diggs and Byndom in their respective corner spots.

Generally we played Cover-5 (two deep safeties, zone-man on the underneath receivers) and used some Fire Zones out of this coverage but really we could do just about anything. The Cover-5 in this package is particularly nasty because you have to deal with Okafor, Jeffcoat, a DT, and Cobbs or Hicks stunting God knows where at your QB with seven defenders dropped back in coverage and two deep safeties.

It so happens that Wyoming scored on this package twice due to a blown tackle (about to happen in the screen shot above) and coverage mistake in the 2nd half when no one played the deep middle in a Fire Zone. You'll remember that as the play when Vaccaro chased the receiver into the endzone while everyone else played zone and then looked up after the catch to find the culprit. Glad I wasn't him. We'll need to get such things sorted out but the package has some serious possibilities.

We may test WVU and see if they can handle this on 1st or 2nd down. If they can't run the ball on that front and we avoid too many disastrous miscues we might be able to cause some problems for Geno & Co, but it's probably mostly a 3rd down look. 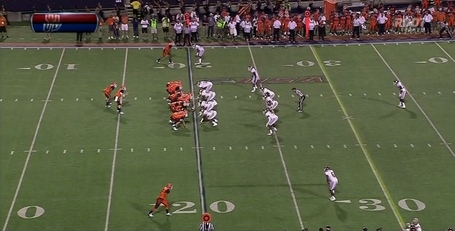 OU's defense is generally well known for their aggressive play for the simple reason that they like to use their safeties to fill backside run gaps and get their LB's going downhill on run reads as quickly and violently as possible.

Here they have FS Tony Jefferson dropping down into the box on the weakside with the running back. 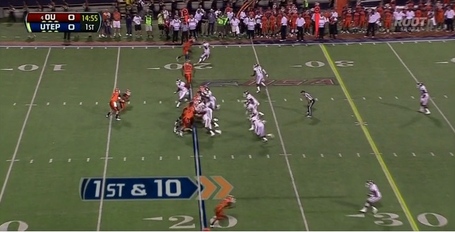 The ball is snapped and their defensive end Washington comes upfield to take away the QB run and lead the RB into the linebackers who are attacking the playside run gaps. However, the TE at the end of the formation is running out to the flat and Jefferson has to follow him. 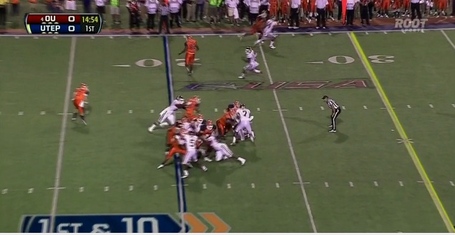 Jeffery cuts hard past the defensive end, Jefferson is in no position to catch him, and the linebackers are all on the other side of the play. Javon Harris manages to save a touchdown with a tackle after a 10 yard gain. Later in the game he whiffed, as he is prone to do, and UTEP nearly had a 90 yard TD run.

UTEP utilized IZ all night long and attacked the cutback lanes against the OU run defense. Other than their defensive ends becoming more aware and treating the backside with better angles, Stoops didn't really adjust to stop it and rarely played anything other than base defense for the duration of the game (save for their dime package). UTEP never made it into the endzone so it's hard to fault Oklahoma for not getting away from vanilla looks.

Moving King from defensive end to defensive tackle was a rough fit for this game but in league play I think it's a winning strategy for the Sooners. He got pushed around a few times in the running game (Macfarland played well) and his young replacement end, Ndulue, got caught out of position a few times on the backside but on passing downs they absolutely murdered UTEP with their base rush. King is a fantastic pass-rusher from defensive tackle.

Oklahoma's linebackers are pretty similar to what we saw last year. They play underneath zone very well, they are lightning fast when pursuing the ball, they can all blitz effectively, but they aren't classic run-pluggers. If a guard reaches middle linebacker Wort it's rare that he will fight the block effectively enough to make a play and OU's suddenly diminished depth and size on the DL may mean that they can be pushed around some this year. Especially in the 4th quarter.

It will be interesting to see how they handle a Power running game when they are run blitzing more. Or a close game against a team that keeps their D on the field.

Their secondary was completely untested by the UTEP bunch and absolutely obliterated their passing game. I'm not sure what to make of their new nickel backs Wilson and Lynn but I think OU will have a lot more success against spread teams this year. If they have weak spots it's Harris playing coverage in space, the nickelbacks being limited to one strength (coverage or run support), and standing up to a downhill running game between the tackles.

On offense they were more sloppy than anything else. They thrive when they can land a shot on 1st down with an effective run or pass and then get in hurry-up mode and fly down the field before you can think about adjusting, but they kept making mistakes which slowed their momentum and killed drives.

Trey Meteyor and the Penn St. transfer Brown are pretty physical receivers but combined for 8 catches on 15 targets ane each fumbled. Stills is now the Ryan Broyles who makes things go in the middle. Overall I think this group is weaker than last year's unit before Broyles was injured but still amongst the best in the league.

They like to play a lot of 20 or 30 personnel in the pistol with Millard and sometimes Ripowksi (these bastards have 2 fullbacks!) lined up with Landry and then the tailback behind. As I've noted before, this Oklahoma offensive personnel was made to throw downfield with play-action. Jones is very accurate on deep throws and each of those 3 receivers are very dangerous on vertical routes. The key for them is establishing a running game to help with pass protection (which was mixed) and to get safeties looking into the backfield.

Unfortunately, I think their run game will be much stronger this year. They were driving the UTEP DL off the ball on Inside Zone plays in the 1st quarter with relative ease. The outside zone with Millard and Ripowski cleaning up backside defenders or leading on the perimeter looks extremely dangerous as well.

Whaley looked very rusty, failed to plant and go with the right cuts early in the game, and made some reception drops that stalled drives. He could be dangerous if he can back into rhythm and make better cuts on Inside Zone. Their JUCO transfer Damien Williams looked very strong, made better cuts, and finished runs with authority. When he came in and made better reads the inside running game took off pretty quickly and they found the endzone.

If OU can run the ball and stay ahead of the chains, they'll kill the spread teams in this league and likely take home the crown. If not, they'll get Landry on his back and out of rhythm and lose to 1 or 2 teams that they wouldn't have expected. You'll definitely want to read this piece by Football Study Hall's Bill Connelly on the struggling Sooner offense.

I haven't watched much of West Virginia or Kansas St. yet but I'm not terribly impressed by Baylor thumping Garrett Gilbert and June Jones nor Oklahoma St. beating up on Flower Mound Savannah St.

After week 1 it's still a wide open race.