Checking on the enemy: Sooner Spring

Share All sharing options for: Checking on the enemy: Sooner Spring

A feature in which we examine some of the developments in enemy country. This time, we'll peak peek across the Red River at conference frontrunner OU.

On paper, the Sooners have the strongest collection of returning talent in the conference. On offense, they return 4/5 of their OL (3/5 if you consider that the RT is moving to the left side), Kenny Stills, Roy Finch, Trey Millard, Jaz Reynolds, and future NFL 1st rounder Landry Jones. I think we can safely assume a high level of passing efficiency from this unit so we'll discuss their development of a running game.

On defense they have a gaggle of young DL none of whom have yet emerged as dominant (little worried about Phillips though), some solid secondary guys, and then Tom Wort, Corey Nelson, and Tony Jefferson. Tom Wort's position on the squad is safely settled as the Mike linebacker, Corey Nelson will probably replace Travis Lewis on the weakside although he presents a few options, and Jefferson is their non-CB defensive back since Quinton Carter and as of yet without a definite position.
More after the jump

Replacing Ryan Broyles midseason was disastrous for the Sooners last year as he offered a dozen essential elements to the Sooner offense including:

-Safety blanket for Jones: anyone notice how OU's ridiculously low sack-percentage dropped without Broyles? The Sooner offense featured a ton of timing/adjustment routes with which Broyles and Landry had reached Colt-to-Shipley level chemistry.

-The ability to house a hitch pass: Guys that are threats to score on bubble screens and hitch routes make a spread offense go. It's the difference between ball-control and 40 ppg.

-De facto running game: Kenny Stills and much of the rest of the Sooner offense found a lot more room to operate when teams had to attempt to prevent Broyles from getting the ball in space. He necessitated a ton of coverage attention underneath.

-Toughness/Leadership: The guy played through a broken scapula in the 2009 RRS and I don't doubt that much of the Sooner's classic confidence and front-running swagger disappeared when he was declared done. Their basic strategy depends on overwhelming opponents early and burying them under an avalanche of turnovers and points. Obviously, their upperclassmen are typically ringleaders in their Shock and Awe campaigns with which they always impress the voters.

While Broyles' injury meant a sad ending for their 2011 season I suspect it was very beneficial for the replacing him in 2012 as they were able to audition some of their existing talent in the slot and begin to find other concepts and players to build on. The return of Landry and much of their OL along with the flood of incoming receiving talent should again make for one of the better passing offenses in the conference, and thus, the nation.

The real question is whether they can get back to having multiple 1k yard backs like they did in 2008 and set up the deep passing game Landry excels at with play-action rather than pump fakes.

In their pursuit of a ground game they face 3 major obstacles:

1). The Sooner OL is a pass-protection unit. They are a taller cast of athletic players who reach very well on Outside zone but struggle to get a ton of push in Power or Inside Zone. There are no Duke Robinson's or Phil Loadholt's here.

2). All new TE's: Trey Millard is a load at FB but all of their TE's are gone. With their incoming talent they may be better here than us, maybe not. However, I expect more 3-wide formations and less size on the edges.

3). RB?: I think fairly highly of Roy Finch but there aren't any names here that scare you like DeMarco Murray or Adrian Peterson. Most of these guys beckon back to the days of Kejuan Jones, Chris Brown, or Reynaldo Walker. When the running game system is in question as being an elite unit you would hope to see a difference maker here. Somehow we live in a world in which the top 3 backs on UT's roster may be capable of starting for Stoops' crew.

For all that, there's a lot to be said for the unit cohesion that comes from returning your OL starters and the Oklahoma pace often exhausts defenses to the point where they can be plowed in the 2nd half. Keep an eye out for what OU accomplishes early in the season against run defenses with BCS-level athleticism. In short-yardage situations, I expect them to continue to "belldoze" everyone. Much like the 08 Texas run game which was weak in base personnel and a load in the jumbo package.

The question of where to put Tony Jefferson is essentially an identity question for the Oklahoma squad. Stoops has screwed over Jefferson from getting much love on "All-Conference/American teams" by listing him on the depth chart as a SLB, even though he's done essentially some of the exact same things as Vaccaro or Tyran Mathieu who are considered as defensive backs because of their coaches tell the media such is the case.

However, Jefferson is one of the best defensive players in the conference and made a big impact immediately as a freshman, and then had an even stronger sophomore season.

Last year, after Baylor torched the Sooner defense and repeatedly burned the safeties, Venables and Stoops made a switch for Bedlam and removed Javon Harris from the field in favor of a 3-4 defensive scheme that had Ibiloye in Jefferson's field backer position and Jefferson as the new Free Safety.

As a result, Oklahoma played the OSU offense about as well as anyone else but Bill Young's throttling of Landry Jones resulted in a blowout loss regardless. As an outstanding tackler and sound coverage player, Tony Jefferson made the Oklahoma defense much safer from big plays in the FS spot where he served as an eraser, but there was far too much to erase.

In the NFL, Jefferson will be a free safety, and it's the position with which claims to be most comfortable. However, there are 2 factors weighing against his usage there:

1). The Stoops don't like to "play it safe" with their schemes and gameplans. If they have an outstanding space player they want him up on the line offering a triple threat as a blitzer, zone-dropper, and perimeter run-destroyer. However, the spread offense demands that the safety positions are frequently playing in deep coverage, so if you have a DB you want to unleash on the perimeter you need play him as a nickel.

2). The nickel position is a demanding one. While that player has opportunities to blitz and make tackles for loss, he also has a lot of space to defend and thus a ton on his grocery list. Most Sooner fans aren't too excited about a 2012 defense with Ibiloye in that spot. Young athlete Julian Wilson may get his chance there but it's most likely that any new "Roy-backer" is going to be a downgrade from Jefferson.

Similarly, there's the question of how to deploy Corey Nelson. In the 3-4 defense, he's an undersized outside linebacker who can blitz, jump out and jam receivers, and make plays in pursuit all over the field. In the classic Sooner 4-3, he's a weakside linebacker who's primary job is to hunt down tackles from sideline to sideline.

Again you have a contrast between a using him to make sure you can bend without breaking, or to wreak havoc in the opponent's backfield and with their identification of your coverage calls.

Now, in the past Stoops was plenty disruptive and had a myriad of pressure calls with his 4-3 fronts. But with big nose tackles like this monster: 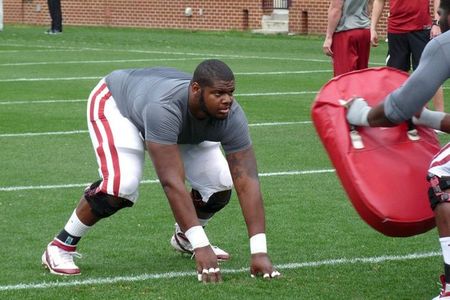 bigger defensive ends like David King, and dangerous people on the perimeter it makes sense to continue the evolution towards the odd front defense and put your most explosive linebacker on the edge rather than in the weakside position. What's more, the Will backer isn't that protected in the nickel like he was in the anti-I formation Under fronts OU employed in yesteryear.

We'll see what they get up to and whether Mike Stoops' return means a shift back towards what has worked for them in the past or a continued evolution towards hybridized odd fronts. Personally I might play the 3-4 with Nelson and Wright/Ibiloye as the OLB while also allowing Jefferson to move back to safety. Either way, I'm afraid they'll have the pieces to rank amongst the best in the league again, but the gap between us and them may depend on personnel decisions and development they undertake now.