The Longhorns have to win AND tune up for the Sooners.

Granted that the odds of Texas defeating Oklahoma weekend after next are dismally low, we might as well talk about what that game will look like and how the Iowa St. game will portend what's next for Texas.

Iowa State is not a very good football team. Their current 2-deep is stocked with maxed out two and three star recruits who almost universally lack NFL attributes, or even All-Conference talent. That said, they are fundamentally sound and will make you do diligence to defeat them.

They generally field much better linebacker play than we see in Austin, albeit with less athletic players, and somehow manage to be fairly solid on both lines. The DL depth chart is largely Jucos and bulked up DE recruits while their strategy on OL is often to take long, tall, underweight kids and grow them into 6-7 300 pound walls like Left Tackle Jacob Gannon.

The result is generally a DL that is firm against the run but lacks pass-rushing ability paired with an OL that is fairly mobile and decent in pass protection but struggles to move piles. This year their DL is actually frisky in the pass-rush thanks to DC Burnham spinning down 6-7, 272 pound athlete David Irving into the 3-tech spot and fielding lighter (222 and 249 pound) DE's.

Generally Paul Rhoads' struggle in Ames has been to find explosive playmakers on offense to make anything of the time or daylight that the OL creates. They have standard spread concepts but usually lack any players to feature in space. QB in particular has been problematic for them as they haven't managed to find a Todd Reesing to distribute the ball, much less an athletic stud who could make plays with his feet and arm.

This year they actually have a pretty explosive scat back named Aaron Wimberly who lit up Tulsa for 137 yards on 19 carries. They also have two short but sturdy TE's and a cast of young receivers worth covering. Sam Richardson will likely struggle to stay healthy in their offense and isn't a pro prospect but he can find and hit open receivers down field if you blow coverages. As a unit they would be unable to score or break 150 yards against Alabama.

Their quick and surprisingly stout DL is backed by Luke Knott's little brother, Jeremiah George (think a faster and more intelligent Rashad Bobino), a 6-1 210 pound Sam/nickelback (they call this their "hy-backer"), a few tiny corners and some very solid and veteran safeties called Washington and Broomfield. For the most part they will sit back in 2-Read (adjustable Cover-2) or Cover-3 while using their safeties fairly aggressively against the run and screen.

You can beat them with execution but they don't give away points with errors and they tackle and force turnovers really well. They forced an ungodly number of fumbles last year and upset OSU in 2011 by knocking the ball out of their hands repeatedly.

Against this foe Mack has some interesting choices to make. If he harbors any delusions about keeping his job he must know that Texas needs to win the Big 12. That means he can't lose this game, one of the few easy wins on the conference slate. However, he absolutely cannot lose the next one and certainly not by a large margin.

Meanwhile, this is Iowa St's big primetime moment this season playing on a Thursday night against a foe notorious for struggling against hard-nosed teams. Their last game was also on a Thursday night so they've had a great deal of time to prepare, possibly even with a complete gameplan for the event that Texas would start Case McCoy.

Given Texas' major athletic advantages over Iowa St I don't see how Mack can fail to simply treat this as a tuneup and focus more on the following opponent with the staff's time and what the team practices. The rumors of Swoopes playing in this game could mean either that Mack is simply preparing for a Case McCoy injury or that he feels Ash's status against OU is in question and it could be important to get Swoopes' feet wet. Hopefully the former.

This creates a scenario in which Texas comes into Ames on a Thursday night intentionally looking ahead to Oklahoma, starting Case McCoy, and facing a Cyclone team playing arguably their biggest game of the year. You see the potential for drama?

Anyways, here's what this game should look like for Texas and what it can tell us about the shape of the team heading into the Red River Shootup on Oct 13.

When Texas has the ball:

First of all, it's imperative that we not risk David Ash to injury. He's not flying to the game, so that's a good start. I propose we supplement this strategy with a John Olerud-style helmet for David to wear all week combined with the padding supplied to the extra scrawny kid in "Little Giants." 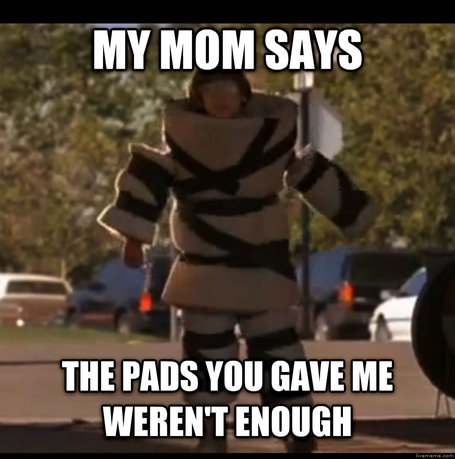 Case's own lack of arm strength removes anything outside the field hash. That leaves the middle of the field for Rhoads to pack with Cyclones. I'm expecting a lot of "middle of field closed" defenses from the Cyclones, looking to outnumber our short screens, throws, and run game with aggressive safeties.

Without that gameplan it'll be very challenging for ISU to handle all of Texas' athleticism at receiver and running back. Daje Johnson, Jonathan Gray, and Kendall Sanders are all capable of scoring from anywhere if Iowa St loses contain. Johnson and Gray in the run game have to a particular concern for Rhoads. If they try and sit back in Cover-2 they will struggle to make the open field tackles necessary to corral and contain Texas' playmakers.

They'll have to attempt to take away everything and trust that McCoy, or Swoopes as the case may be, cannot make them pay deep.

Practical points for Texas including working on running the ball against an eight man front and beating press coverage because that's exactly what Oklahoma will bring to the table. The Cyclones are small up front but then so are the Sooners, although the latter are more athletic. If Texas runs over Rhoads' crew for 200 yards or so, that'd be somewhat encouraging that we might make a showing against OU.

If Texas continues to make strides in the run game as they have been, and are able to find Daje Johnson in space, they should be able to drop about 30 points on this team. If they can't run the ball, things could get dramatic.

When Iowa St has the ball:

Other than featuring spread sets and short TE's very little about this game will come in handy in preparing for the Sooners. That said, this is a safe place for Greg Robinson to finish up his work in fixing our base defenses to be sound against the various wonders of the B12 offensive world.

Texas' Cover-3 approach to stopping Kansas St went reasonably well and will come in handy again this season against other run-heavy teams in the conference. However, they'll need a 2nd base defense to mix things up with and they need something that can bend without breaking against the likes of OU or Baylor.

Iowa St. is as good an opportunity as Robinson will find to fix the Cover-2 defense he utilized against Ole Miss while seeking out personnel to stock the safety and linebacker positions which have left us all wanting.

Word on the street says Tim Cole will start at weakside linebacker, possibly coming off the field in nickel so Peter Jinkens can move over from Sam. This game will serve as an audition tape both for him and for Santos in replacing Edmond in the middle. I've never seen Cole play in a live game so I have no idea what to expect. His high school film made him out to be a physical but somewhat limited prospect, sort of like the linebackers on the other sideline.

Texas fans should be particularly interested in what happens when Iowa St. runs "Power-Read" the off-tackle QB run paired with an RB sweep to the outside. I've already argued that Texas' approach in Cover-2 should be to force the ball inside because our linebackers have really struggled to reach the sweeping back and our safety "riskie" run support is not consistent enough to stop the play. The fact that the sweep will be handled by their sole explosive player, Wimberly, should be more than enough reason for Robinson to instruct the DE's to keep the ball in Richardson's hands.

Play the game in Cover-2 and clean up the scheme's soundess issues against modern spread-option football and Texas should be able to keep the Cyclones in front of them and out of the end zone. Then, we'll have a game's worth of tape of semi-decent football played in both of our base defenses! Hooray!

The immediate future of the 2013 season is grim but Texas has a chance here to continue to improve, blowout an inferior team, and establish something that could result in a passable effort against Stoops and co in another week.

If things get dramatic...that could always be entertaining as well.