The baddest Longhorn LB since Tommy Nobis is once again honored as one of the NFL's elite.

The two-time Pro Bowler and 2012 All-NFL selection moved up 19 spots from last year to 59th in the 2013 Top 100 NFL Countdown. An impressive achievement given that he labors in the relative anonymity of the Kansas City salt mines.

His twitter handle @superdj56 is fitting, because Derrick Johnson made an impression on me long before the NFL.

I first saw him on a grainy high school highlight tape (Recruits in Review, VHS; heady times, y'all), a 200 pound greyhound from Waco High decked out in a blood red jersey and a black face shield who lined up wherever he pleased and hunted the ball like the carrier had slapped his grandma. There is fast, there is quick, and there is an 17 year old Derrick Johnson. It wasn't fair. He was the first player I ever saw shoot a gap so suddenly that he could tackle a QB before he could hand it to a running back on a dive play. He ran a 10.5 100 meters and was a 48 foot triple jumper. His last high school game was deep in the playoffs against eventual state championTyler John Tyler. He had 30 tackles and four forced fumbles in that loss.

Then he came to Texas. He showed immediately as a skinny true freshman, finishing 2nd on the team in tackles and leading the Horns in tackles for loss, despite only starting two games. He was one of the most instinctive linebackers I'd ever seen - unorthodox, quick, intuitive, decisive - and could singlehandedly turn games with turnovers or a daring tackle for loss. Early in his career, DJ excelled in coverage (he had 9 career interceptions and 30 PBU), but before his senior year he perfected the Lawrence Taylor strip-punch technique and went on to terrorize opponents with NINE FORCED FUMBLES in one season, a statistic I've still not yet come fully to grips with. DJ was 1st Team All Big 12 for three years straight, an All-American for two years, and he won the Butkus and Nagurski Awards as a senior. 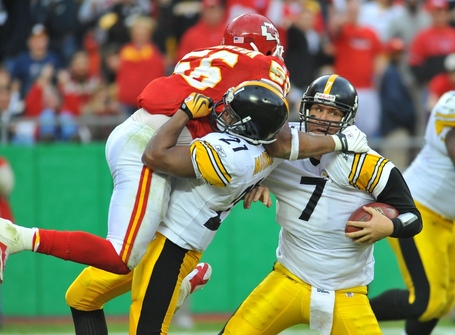 In Kansas City, DJ has become the best defensive player on a bad team and the foundation for what Kansas City is trying to build on defense. Living in the Bay Area, I'm often cursed with having to watch the Raiders. But I was blessed when I was able to watch this live: