College Football Ranking and Academic Reputation: Is There a Tradeoff?

Share All sharing options for: College Football Ranking and Academic Reputation: Is There a Tradeoff?

We Hear You're Leaving, That's Okay

So, we're sitting 2-2 at the first bye week, with the easy part of the schedule behind us. In the interest of timing and context I suppose we should talk about the steer in the living room.

I'm sure your weekend at the college didn't turn out like you planned. At my old school, we know too well what people mean by down and out.

This year especially, Mack built my hopes so high, then let me down so low. It's been ten years and maybe more since there were this many returning starters, yet we still managed to lose two of the first three games. I cursed the gloom that set upon us. Years ago in days of old, Mack's usual drivel made me mad, mad, mad. This season, it makes me sad, sad, sad.

I'm not blind, and I don't like what I think I see. Many times I've listened and many times been bitten. The things that pass for knowledge, I can't understand. Every day there's a new thing coming, with Mack trying hard to recreate what has yet to be created. And it makes me wonder:

Without Mack, where would you be now?

It comes as no surprise that lots of us drink Scotch whisky all night long and stay drunk all the time. What the people need is a way to make them smile. It ain't so hard to do if you know how.

I stepped up on the platform because the man gave me the news: the fix is in - you'll be a witness. When the levee breaks, don't be alarmed now. It's just a spring clean.

Well I Built Me A Raft and She's Ready For Floatin'

I originally meant to post this article before the CFB season started, but when that didn't happen I decided to save it for bye week. The official beginning of fall seems like an opportune time to reexamine big picture topics like the challenge of balancing academics with on-field CFB success.

My working hypothesis was this: to the extent a school is higher-ranked in terms of average year-end CFB ranking, it will tend to be lesser regarded academically, and vice versa. This seems at least somewhat intuitive.

To examine whether there is any statistically plausible inverse relationship (tradeoff) between academic reputation and CFB ranking, I looked at two collections of data: (a) the USNews & World Report college rankings for 2012 (these are relatively static from one year to the next); and (b) the final post-season CFB rankings for every season from 2002 through 2012.

These are the USNews academic rankings for the top 50 (and ties) colleges and universities. Note: the rankings at the USNews website linked above have been revised since I began researching this article. These now reflect minor differences with respect to the prior year's rankings incorporated herein.

On the subject of ranking colleges by academics (or academic reputation), many are skeptical, while others are critical of USNews' specific methodology and approach. I believe it's impractical (if not impossible) to assign any meaningful ordinal measure to colleges and universities at an interdisciplinary, macro level, and any attempt to do so is a character in search of an author. Come on, Student/Teacher ratio - who's kidding whom? Freshman Chemistry in a class of 600 is a rite of passage. As an employer myself, I inherently distrust any job applicant who never went through it. Nevertheless, we Americans are completely enamored of rankings for anything and everything, so it was inevitable that the market would eventually recognize pent-up demand.

But you work with what you have. Partly to ameliorate the apparent discrepancy, I winnowed down the USNews rankings to just those schools with CFB programs that were also members of BCS automatic qualifier (AQ) conferences. The table below captures this AQ-only academic ranking. 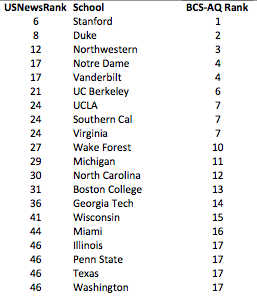 Never Let Them Tell You That They're All the Same

With respect to the CFB year-end rankings, I averaged each school's rank for the eleven-year period between 2002 and 2012. For purposes of average ranking, any team that was unranked at the end of a particular season was arbitrarily ranked number 30, so as not to overly penalize. Interestingly, every school finished the season unranked at least once between 2002 and 2012.

Next, it occurred to me that the difference between a ranking of, e.g., number 2 and number 5, should be more momentous than the difference between a ranking of number 12 and number 15 - academically as well as athletically. I decided to capture this weighting by using the natural logarithms of both the academic and CFB rankings, and so the values represented and discussed throughout the remainder of the article are these log-ordinal values. As an aside, interested readers can recover the original value for a log-number in, say, Excel worksheet cell A2, by evaluating '=EXP(A2)'.

The final step was to create an {X, Y} pair from the log-academic rank and log-CFB average year-end rank, and then arrange the schools in ascending order based on the sum of X and Y. The graphic below depicts the relative placement of the 25 schools having the lowest aggregate score. 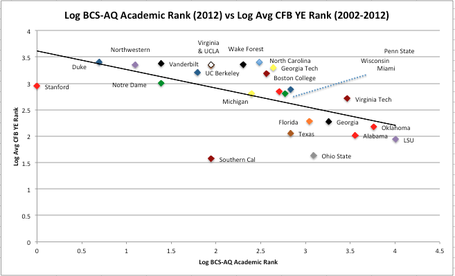 And because I know someone (read: Aggie) will ask, here were the next ten schools: 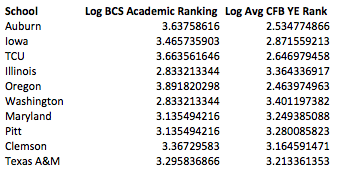 I ran a linear regression on the log-rankings, and it yielded a marginal increase (decrease) in log-average CFB ranking equal to -0.35224 * log-AQ academic ranking. This trend line is plotted. Only ten schools managed to out-perform, in terms of average CFB ranking, the curve's prediction based on academic rank: 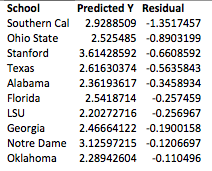 As a footnote, it bears mention that the two best-performing schools on the scale, Southern Cal and Ohio State, are currently on probation for various NCAA rule violations.

The chart above offers a number of interesting artifacts, but by far the most significant feature is the way that the respective schools are clustered (albeit loosely) around the trend line. Note that it effectively creates an academics-CFB expectation that runs from Duke, through Northwestern, through Notre Dame, through Michigan, through Georgia, to Oklahoma.

It also appears that in terms of having one's cake and eating it, Stanford may have supplanted Notre Dame. In the days of my youth, outstanding high school football players with equally exceptional SAT scores would routinely come to the land of the ice and snow. Yet the chart suggests that over the past decade at least, the top scholar-athletes are going to California.

What Were Once Vices Are Now Habits

So what's our beef with Mack? Over the period in question (which coincides roughly with Mack's tenure - and I do mean tenure), Texas was fourth best at maximizing its CFB ranking relative to academics. Indeed, it was second only to Stanford if you don't count schools on probation.

Several things. First and most immediately, the more recent trend is disturbing. Texas' average year-end ranking is headed straight north, and as in golf, that's a bad thing in this context. In contrast, Stanford's micro trend is moving just as strongly in the right direction.

Second, the data set we're using doesn't capture the respective schools' resources. No school has committed more resources, and has more resources to commit, than Texas. If Mack Brown is Texas' CEO, then ROA is miniscule and Mack's managerial performance as measured by EVA is sorely lacking. By now, it's apparent that this is characteristic of Mack. As the late Don Meredith was wont to say of Walt Garrison, "if you need two yards, he'll get you two yards. If you need ten yards, he'll get you two yards."

Third. 14-63, 13-65, 17-55, and 21-63. And incidentally, the second of those cost us Adrian Peterson. No rational Texas fan expects to beat Oklahoma every year. But lopsided, demoralizing, why-did-we-even-bother losses to Oklahoma can't happen. A winning percentage against Oklahoma that's significantly below .500 is also unacceptable. Counting this year, Bob Stoops has taken two out of three from Mack.

Five Names That I Can Hardly Stand to Hear

A less apparent but equally compelling take-away relates to conference affiliation. See below.

Observe that within the USNews top 50 colleges and universities, the ACC, B1G, and Pac 12 conferences are all well-represented. In contrast, after Texas the rest of the Big 12 is way, way down inside. Indeed, it's somewhat astonishing on that basis that the Pac 12 was willing to admit Oklahoma, Oklahoma State and Texas Tech to the conference along with Texas, and it again calls into question the UT administration's decision to legitimize and enable so motley an assortment as the Big 12, apparently just for the sake of the Longhorn Network.