Vince Young and Reggie Bush - Harbingers of doom for Texas and USC?

How Reggie Bush and Vince Young carried their programs to great heights while bearing the seeds of each program's downfall.

Share All sharing options for: Vince Young and Reggie Bush - Harbingers of doom for Texas and USC?

December 10, 2005. Reggie Bush claims the 2005 Heisman Trophy as college football's most outstanding player. On the way to the podium he's congratulated by the man who finished second in the voting, Vince Young.

January 4, 2006. Bush and Young meet in the Rose Bowl for a true clash of the titans. Not only did both men merit that designation on their own, but they headlined two of the greatest college football squads ever assembled in a game that will be remembered with reverence 50 years from now.

At no moment during those months did anyone imagine that the future would be anything less than supernova bright - not only for Bush and Young in the NFL, but for the programs they left behind.

The USC Trojans, embraced and hyped by an emerging 24/7 media culture in ways that Notre Dame squads of old could only dream of, were a shining West Coast beacon that drew 5-star talent like moths from across the country. Not even Linda Lovelace could have matched ESPN's treatment USC leading up to the Rose Bowl, and while their failure to "Three-Pete" shocked many outside of the state of Texas it did little to dim the program's star. A Hollywood atmosphere, a player's coach (who also coached a mean defense) and the spotlight's gleam looked to translate into Top-Three recruiting classes for the next decade.

Only after the confetti fell on Vince Young did the national media begin to give the Texas Longhorns their true due, but what they saw had to be impressive. A team coming off back-to-back Rose Bowl wins with an all-time icon at QB, helmed by a recruiting-focused coach who hauled in annual crops of 4- and 5-star talent from the fertile grounds of Texas. Could any program, anywhere, be more well-situated for sustained dominance?

Perhaps no one could have predicted the Fall.

And it wouldn't come swiftly for either program, as Texas and USC combined for five BCS Bowl berths from 2006-2009. But when the Fall came, it was ugly and brutal and undeniable.

From the start of the 2010 season, Texas and USC amassed a combined 52-33 record that defined mediocrity. Both proud programs would bear the strap-marks of nationally humiliating defeats. Trojan fans were treated to 43-22 and 62-41 losses to Arizona State, while Texas endured a(nother) pair of 30+ point routs at the hands of its most hated rival and is fresh off surrendering 550 rushing yards to an unranked 2-2 BYU squad.

The Fall had indeed come. And for both programs, the seeds of this bitter harvest were sown by their brightest stars.

USC - All That Glitters Isn't Gold

Under Pete Carroll, USC regained its national prominence while becoming an absolute lodestone for elite talent. It also became the Land of Do-As-You-Please. Carroll cheerfully turned a blind eye as that talent reveled in a culture not just rife with celebrity and media access, but with unsavory camp followers like pro agents, runners, and everyone's favorite Spec's employee: 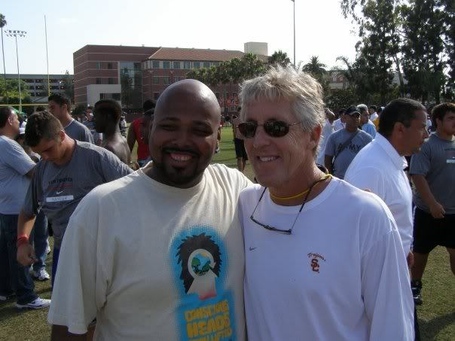 No Trojan lived larger on this largesse than star tailback Reggie Bush. As Yahoo!'s painstaking multi-year investigation would uncover, Bush received a wealth of impermissible benefits including clothes, flights and a rent-free house for his family from fledgling sports agents hoping to make him their centerpiece client.

The brightest lights make for the biggest targets, and the NCAA was simply itching to make an example of Carroll's program. They took obvious exception to Bush's blatant violations, but some believed that they were also out to punish USC for its "USC-Ness" - the wide-open, laissez-faire, celebrity-filled environment that Carroll allowed and Bush personified.

And punish they did. The NCAA dropped the hammer on the Trojans in a major way - USC vacated wins over two seasons, endured a two-season bowl ban and the loss of a whopping 30 scholarships. (Of course, since college coaching is a consequence-free environment when you play the game the right way, Pete Carroll had long since skedaddled north on the Pacific Coast Highway).

Faced with crippling sanctions, USC decided they needed a fall guy to weather the storm. They tabbed Lane Kiffin, who cheerfully abandoned his post at Tennessee after burning more SEC bridges than William T. Sherman. Kiffin would bring in some high-wattage recruits like Marqise Lee, George Farmer and Max Browne. He would also continue to burnish his reputation as one of the game's premier A-holes while stumbling through lackluster losses, bizarre press conferences and the removal of his own Dad as Trojans DC. He completely lost his ability to command players' respect down the back stretch of the 2012 season and wasn't exactly coaxing a fanatical effort from them as 2013 got underway.

Less than six hours after the Trojans' latest skull-romancing at the hands of Arizona State, athletic director Pat Haden decided that the fall guy had fallen far enough. Kiffin was unceremoniously dumped in the LAX parking lot as the Trojans officially hit bottom. They'll stagger through the rest of 2013 with an interim coach before tabbing their new head man. And his first job will be to rebuild the substance was gutted thanks to USC's Hollywood style.

The Legend of Vince Young will be spoken with reverence by Texas fans for the next century, and rightly so. VY's incomparable brilliance created dozens of shining moments, and he handed a hungry fan base its first national title in 35 years.

Unfortunately, that wasn't the only thing Vince handed down. He also handed Mack Brown the ultimate confirmation that Mack's approach to coaching brought results.

Like all great salesmen, Mack is a master of leavening lies with truth. No fewer than a dozen times - most recently on the Dan Patrick show - Mack has claimed to 'honestly not listen' to what people say about the team. Of course, on its face this is a hilarious, farcical lie. Many media members will tell the tale of being summoned to Mack's office for a session of petty whining about their coverage of Texas and mean-spirited bullying to try and make them change their tune, with former Longhorn Rod Babers as the latest victim.

But Mack isn't an outright liar in this instance - while his thin-skinned and rabbit-eared persona ensures that he listens to every criticism that's broadcast, typed or just thought loudly, he doesn't actually hear them. No outside voice has ever truly penetrated the bubble in which Mack exists. Even the impacts from program change agents like Dick Tomey and Will Muschamp scarcely outlasted their respective departures, swiftly washed away like footprints at high tide.

Secure in his bubble and now validated by his title, Mack would continue to take the wrong lessons from both success and failure as his favored approaches (it would be a bastardization of the term to call them processes) continued to hold sway.

Manufactured enthusiasm would continue to ossify into a dogmatic adherence to false rituals that choked out any authentic spontaneity or passion.

Accountability would continue to erode in favor of of a 'family atmosphere' with Mack as a doting pater familias, shielding his 'kids' from harsh words and harsher realities.

Toughness and physicality would continue to be sacrificed to avoid banged-up players and bruised egos.

Recruiting practices would continue to chase their own tail, as "kids who wanted to be at Texas" got Texas' attention - and the reflexive Rivals stars that went with it - in a hollow and self-reinforcing cycle.

Vince's hand-delivered crystal football allowed Mack to fully and finally become as entitled as the program he ran. In his mind - and in the minds of too many important decision-makers - Mack Brown had fully melded with Texas Football. As Mack Brown dithered with ritual and scanned the airwaves for uncomfortable truths, Texas Football withered - though Colt McCoy's otherworldly accuracy on countless 3rd and 8's and Will Muschamp's uphill attempt at a Cultural Revolution papered over the rot for a while. When the whole structure finally came crashing down, Mack and the powerful men whose favor he had so expertly curried decreed that he had 'earned the right' to fix it. Three years into the process attempt - three years that have seen Texas tread water while seismic shifts in the landscape have thrust rivals into positions of prominence - it still ain't fixed.

And it ain't all that close.

So now, more than seven years after Reggie and Vince had their iconic meeting in the Rose Bowl, their respective programs again find themselves linked.

Linked by the kind of punchline-worthy performances that always draw scorn when turned in by purported national powers.

Linked by an erosion of regional standing at the expense of rising programs (Stanford, Oregon, Oklahoma State, Baylor, Texas A&M) that will make climbing back to the top all the tougher.

And now, linked by speculation on which coach will get the chance to lead each program back to prominence.

USC had enough, and publicly asserted their intention to move forward with finding the best man to return them to glory.