A question of comps.

The NFL draft, much like the real estate market, tends to assign value by its comps.

Physical dimensions.  Amenities (abilities).  Development potential.  The trained eye sees past the filthy carpet to the gleaming hardwoods below.  It's not just about current value, but what something might one day be.

As much as property owners and sports fans like to believe that their favorite athlete or property is a unique snowflake with special charms, 90% of value assignation is straightforward and has little regard for our sentimentality.

But what about the rare properties that defy conventional comps?  The 2 bedroom, 4000 square foot house that has a fireman's pole in the living room, a master bathroom with nautical themes inspired by the Titanic and a backyard sculpture garden depicting the stages of various anime tentacle attacks.  Is this a MLS cancer?  Or a dream home?

On May 8th, NFL general managers, owners and coaches will be tested by two of the most interesting market valuations in recent draft history - a process that calls into question what we know about human motivation, gridiron conventional wisdom and how franchises define their culture.

It will not be a pure football decision.

Fans, media and various philosophical camps are all interested parties - creating coalitions, championing draft movements and placing vast social pressure on the main actors.  It's easy for the New England Patriots to shut out exigent noise with Super Bowls and the seeming birthright of a 12-4 season and the AFC championship game. Singapore, the Patriot nation-state analogue, may be dictatorial, but its people trade the right to complain for prosperity and security.

Dysfunctional organizations - the predominant presence in the upper end of the NFL draft - are losers for a reason. Too often they are held hostage to the noise, seeking to placate fans and media with hometown heroes that don't hold up under realistic scrutiny.  The more organizations fail, the more schizophrenic they become, engaging in acts of self-sabotage or short-term fan assuagement that create the need for the NFL's version of the IMF - a draft order determined solely by persistent need and the consistent ability to fail.

Players like Johnny Manziel and Jadeveon Clowney should panic bad organizations.  Against the backdrop of one of the deepest drafts in NFL history, drafting, passing, trading away or trading up for the value of either athlete is the stuff that costs jobs, wrecks franchises and turns owners into despised public figures.

Fortunately, fear often does the work of reason.  But is prioritizing or fleeing from either player the more fearful position?  A franchise QB is orders of magnitude more valuable than any other position.  Are you more scared of watching Manziel implode under your center and in the tabloids or are you more frightened of failing to pull the trigger and watching a YOLO hero take your division rival to the Super Bowl?

Clowney - the surest of sure things by any physical measure - may not be.  What about investing the hopes of a franchise in a 6-5, 270 pound 4.5 40 physical freak so gifted that...he managed 3 sacks and 35 tackles in his last season at South Carolina?  There's a disconnect.

In the draft, you cannot abstain.  Every team must vote with a selection until one of their peers relieves them of that burden.  And it lives on the historical record forever.  Both athletes represent a significant definitional challenge. Johnny Manziel by an absence of helpful comparators and a high bust potential, Clowney by an absence of reassuring production.

Where are the useful comps?

Yet neither player has much of anything in common with the Aggie QB beyond the tape measure.

Wilson is a game manager, making his living playing off of the run-heavy Seattle offense and using his improvisational abilities judiciously to extend the play when 3rd and 9 rears its ugly head. He's also wise beyond his years, accurate, with the ego of a Buddhist monk.  He's primarily tasked with converting the favorable field position afforded by the Seattle defense into enough points to win.

Manziel won't sublimate himself to game manager on a run-focused team asked to turn it on five times a game on 3rd and long.  Because he can't. To tap Manziel's upside, you have to pull the cork all the way out of the bottle.

Enter Drew Brees, who, like Manziel, puts the entire offense on his shoulders.

But Brees is the league's most under-appreciated unicorn - a freak who is never identified as such.  He's a 6 foot tall pocket passer in an offense designed to create passing windows between the guards who relies on superior downfield accuracy and the game's quickest release.  Given his frame and structure of offense, he has virtually no stylistic comparators.  Brees uses his mobility in a constricted area, shuffling quickly to find his window, ignoring the inside rush funneled past him, stepping up into the teeth of the rush with his eyes downfield instead of sprinting to the sideline.

But what if Manziel represents a new category all his own?  You can't simply discount him for our own lack of imagination.

What if he's paired with an offensive coordinator who adopts a shotgun, hurry-up, no huddle attack with clear rules of improvisation for the receivers and a OL geared to protect in ways that complement Manziel's free-form?  They might create Something New. Playground football perfected.  The final evolution of basketball on grass - the motion offense comes to the gridiron.

Manziel's mobility isn't a function of foot speed - it's short area quickness.  Elite change of direction (he has a 4.09 short shuttle time - comparable to the upper end of NFL WRs and DBs) means that single DL are nearly helpless trying to corral him.  He was an impossible challenge for poor to above average college defenses (mostly what he faced, despite the "he faced the SEC's best every week!" platitudes) and he twice thwarted a very good one - Alabama - because A&M defied the tacit SEC agreement that your offense must submit to Nick Saban's personnel and schematic preferences.  Trevor Knight and OU didn't get that memo either.

The problem Manziel faces is that the glaring exploitable inefficiencies frequently available in the college game disappear at the next level.  College defenses suffer most from a deficit of cohesion, a lack of good pass rushing DL and a shallow roster of quality defensive backs.  A good spread offense exploits this paucity and presses its advantage in ways that equally talented conventional offenses can't touch.

Manziel's performance drop-off against properly deployed defenses with athletic pass rushing DL and deep secondaries was alarming.  In two games against LSU, Manziel lost both contests while throwing for a combined 45 of 97 for 500 yards, 1 touchdown and 5 interceptions.  Against other SEC West opponents, he averaged over 10 yards per attempt.  Is this coincidental to the fact that LSU had two NFL cornerbacks, an athletic DL that could constrict the pocket without losing containment and a defensive coordinator who understood the real engine of A&M's production?

Can Manziel improvise and make big plays at the NFL level?  Yep.  He's uniquely gifted.  NFL defenses don't like dealing with uncertainty either.  However, quality NFL defenses with reasonable game planning will deny extended plays as an offensive staple.  Bank on that.

If you draft Manziel to be your QB of the future, you're counting on him to improve a broad array of fundamental traditional quarterbacking skills to get through the bulk of the game and allow him his handful of special improv movements.  You're also committing to an offense, scheme and personnel deployment built around his skills.  If Manziel busts, a large portion of your offensive roster busts.  You won't just be replacing a signal caller.  You're starting over.

You draft Johnny Manziel with a high pick in an attempt to redefine the possibilities of NFL football.

If you understand that fact and its incumbent risks (in a word: considerable), carry on.

If you don't realize that's what you're doing, you'll be back drafting early again very soon.  Actually, "you" won't.  Your successor will. 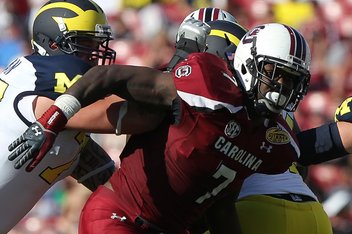 Jadeveon represents an entirely different proposition - the prospect so physically perfect that he is the comp. It's a struggle to find NFL DEs as talented.  Jason Pierre Paul?  A young Julius Peppers?  Aldon Smith?

I've never seen a DE own the space from the outside shoulder of the offensive tackle to the sideline more easily.  It's shocking to watch.  Men his size shouldn't move that way.  It's Lebron-ish.  He's naturally strong, he has wingspan and he demands constant attention.

So what's the problem?

Focus. Too often, Clowney consented to being cancelled out in games when teams game planned around him. If a team avoided him altogether, he didn't necessarily look for work.  Is this a bored athlete biding his time for the big stage or does it say something fundamental about his psychology?

Skill.  3 sacks and 35 tackles in his senior season?  Hmm.  Sacks are often a deceiving measure of pass rushing effectiveness and in some ways his modest output is explicable. Clowney got a lot of game-planning attention.  But that ignores the fact that when he wasn't getting extra attention, Clowney has primitive pass rushing skills and he was only OK heads-up against the power running game.  His skills are ordinary at best.  That won't wash in the NFL. It can be learned. Does he have the mindset to do so?

Psychology.  Clowney has been one of the anointed since grade school, when he was the consensus #1 recruit in the country.  His last year of college was a cursory box checking.  Is that the psychological profile of someone in their early 20s that you'd like to give tens of millions of dollars?

That's a seemingly loaded question, but the answer is not easy.  The answer that appeals to those of us without elite talent (all of us reading this) is "He won't succeed with that lolly-gagging!" but supremely gifted athletes can and do turn it on at will, particularly when they're playing for a paycheck or find themselves challenged.  The examples are many.  Just as there are many talented players who quit on the game once their signing bonus hits their checking account.

Usain Bolt is a famously lazy athlete.  That's no slight.  He admits it readily.  His Jamaican teammates grinding it out every day for incremental improvements tease him and probably resent him at some level.  He shrugs.  And smokes them all the same.  He is a genetic super-being.  The rules of mortals don't apply.

Clowney is the pick that supposes talent will win out.

To give that bet the best early odds of success, he's a much better 3-4 OLB prospect than traditional DE.  The hardest aspects of OLB are what he does effortlessly and the ability to move him around and find physical mismatches (a RB is going to pick him up?) covers up his skill deficits until coaching can get him up to speed.

What are your appraisals?