A basic guide to keeping those pesky runners bottled up where you can do mean things to them.

Welcome back to BC Boot Camp!

The first entry of our series took a look at some basic assignments and responsibilities in coverage. In Part Two, we're going to look at the other two fundamental elements of any defensive scheme - gap and force responsibilities.

To start out, here's a good diagram from ProFootballFocus.com that details alignments and gap responsibilities for the D-line:

The numbers below our handy O-line circles denote the various "techniques", or places where the defenders can be aligned. The 0-technique is where you'll find your classic 3-4 nose guard, head up on the center and ready to make his life hell for three hours. A 1-technique is a DT lined up somewhere between the guard and the center (usually on the guard's inside shoulder with "inside" being closest to the ball), a 3-technique DE is lined up outside the guard and so on.

We'll have a subsequent post that dives a lot deeper into the various alignments and assignments that you'll see from different defensive fronts, but for now let's suffice to say that where a guy is lining up tends to have a pretty strong correlation with which gap(s) he's responsible for defending. The letters on top of our OL up there denote the various gaps - since football isn't a wuxia film where the runner can just sprint up the back of an O-lineman and leap into the air like a boss, he'll need to get through one of those gaps to get anywhere. A gaps are between the center and the guards, B gaps are between the guards and tackles, C gaps are outside the tackles/between the tackle and a tight end, and D gaps (sometimes referred to as the 'alleys') are outside the TE's.

So how to go about defending those gaps? Let's go back to the basic 4-3 Under alignment that we were looking at in the Coverage post (as always, click to embiggen): 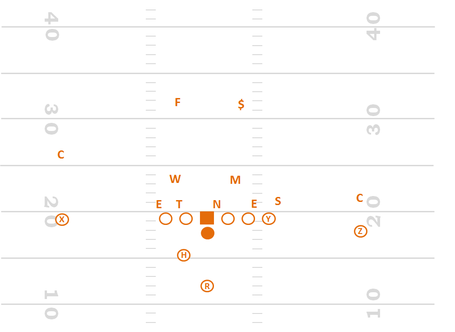 It’s a 4-3 with four down linemen. This kind of front is called an Under, which means that the 3-technique defensive tackle (T) is lined up to the opposite side of the formation from the run strength (which is typically defined by the tight end). Frequently an Under front will see the Sam linebacker drop down to basically the line of scrimmage on the tight end's outside shoulder.

Again, we'll delve deeper into fronts and their various meanings later, but since you always hear "under" or "over" tossed around when talking about fronts I figure it's handy to be able to tell which is which. The way I remember under from over is thinking about that 3-technique DT having to run over and tap the tight end. (NOTE: Unless it's a Manny Diaz stunt, it's unlikely that anyone will ask said DT to actually do this.) In an under alignment, he's "under" the center relative to where the TE is and would have to run past the center to reach the TE. The Sam linebacker is also "under" the other two linebackers who are playing back off the line.

The other defensive tackle is designated as the Nose (N) and he’s aligned in a 1-technique between the guard and center. Most 4-3 defenses tend to end up with one DT who’s more adept at plugging the run and one who’s more adept at getting into the backfield and being disruptive. Their alignments tend to cater to these strengths, with the 1-technique N aligned to mix it up with the guard and center and (frequently) command a double-team and the 3-technique T aligned outside the guard where he’s harder to double team and it’s easier to rip into the backfield. Texas' base D will likely be starring Dez Jackson as our 1-tech and Malcom "I Only Need One 'L', Bitch" Brown as the three tech.

As noted the Sam is aligned outside the tight end, with the other two LBs more or less over the "bubbles" that are naturally created by the D-line's alignment. The Mike is lined up right over the bubble between the strongside guard and tackle, and the Will linebacker is close-to-but-not-right-over the weakside center-guard bubble. Even if he’s responsible for that weakside A gap, you might see him align a step or two outside it as a concession if the ball is in the middle of the field as it’s pictured here. He’ll have some real estate to cover if he’s asked to cover the flat or react to quick throws out there, so he may be cheated that way a bit to ensure he’s not late to the party.

So how about those gap assignments? In a simple one-gap scheme, everyone could be assigned the gap that you'd probably guess they'd have based on alignment: 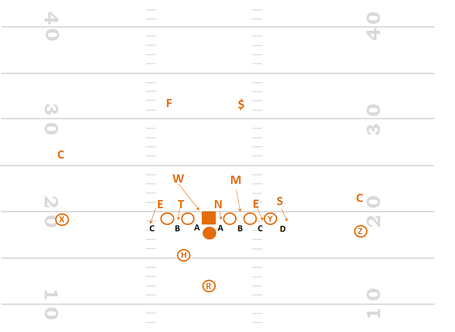 Pretty straightforward, right? Everyone has a clear responsibility, and outside of Will needing to run a bit no one is looking at getting immediately out-leveraged by a blocker in order to make it to their gap.

But the onus is on Mike and Will in particular to diagnose run quickly and come downhill fast so that no blocker has the chance to get out on them and create the kind of vertical gap that a runner could exploit. That means they could be vulnerable to some other things. Mike could bite up on a play fake and let the tight end slip right past him for an easy hook-up in the seam. Will could over-pursue a cutback run or get caught inside against something like a "rocket pitch" concept where the QB fakes the belly handoff the fullback and pitches out to the runner going weak.

What if the defense wanted to change things up a bit, and give the linebackers a little more freedom to read and flow? Some simple shifts in alignment could help you do some two-gapping: 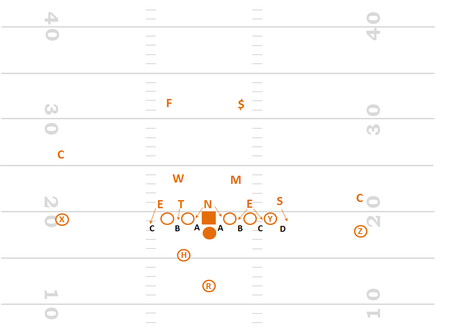 With a simple alignment shift by your Nose and Strongside End, you're in position to let those guys play head-up over an O-lineman and take primary responsibility for the gap to either side.

This is actually something that the Seahawks did quite a bit, with big ol' Red Bryant lining up as a 5-technique DE over the offensive tackle. The Mike and Will backers would obviously still come down on runs, but they've got a little more flexibility to read and flow since there's already someone working to close every gap. The tradeoff is that if it's a pass, you've blunted the rush of your NT and Strongside End by giving them that head-up, run-first responsibility. Things got easier for your linebackers, but may get harder for your corners and safeties if your weakside end and 3-tech DT don't get home with the rush.

Since those two concepts are so integrated, many coverage calls include a descriptor of who's the force player. These descriptors are usually something like Buzz (to denote that a 'backer is the force player), Cloud (for a cornerback) or Sky (for a safety.) Here's what a Sky support coverage might look like: 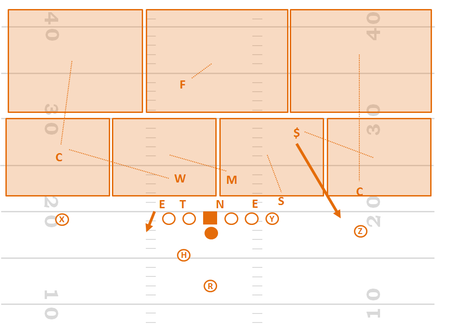 Just before the snap, the strong safety starts dropping down outside the Sam linebacker while the free safety rolls to the deep middle. (This kind of move would probably also result in some shifting in the defensive front, but for simplicity's sake let's leave them as-is for now.) If the strong safety reads run, he'll come downhill and set the edge in order to turn any strongside runs back inside. If it's a pass, he'll move out to the curl-flat zone.

With a simple swap in assignments, the coverage might shift to Buzz support: 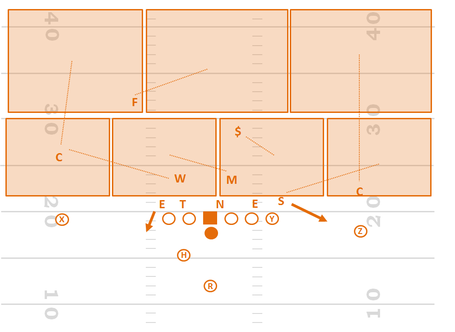 Here, the strong safety is still dropping down, but could afford to come down later and stays inside of the Sam's alignment while taking hook zone responsibility against a pass (again, would probably cause some other front shifts, but again simplicity). The Sam would attack the shoulder of the TE hard at the snap of the ball to make sure he could turn any run inside. If he read pass, he'd then get out to curl/flat.

As one more change-up, you could get Cloud support out of the same look: 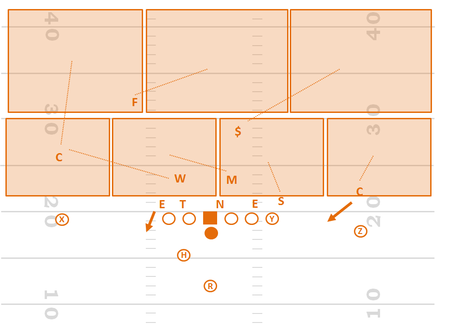 Now instead of dropping down, your strong safety is rolling back to a deep third in coverage once he reads pass. The corner is playing the curl/flat zone with the same kind of emphasis/technique that he’d normally use in a Cover 2 look. Cloud support requires a physical and fairly savvy dude. If he reads run he needs to attack at the proper angle to close things down and prevent a huge alley for the back to cut up into, while also making sure he can’t get sealed inside by the receiver and allow the back to get outside him and break a long one up the sideline.

Putting It All Together

In these first two pieces, we've looked at the three things any defensive scheme needs to answer:

- Who's responsible for the gaps presented by the offensive formation

The fun thing about defense is, if you've got answers for those three questions then you can do whatever you want. Hybrid fronts and players, wacky Ryan Family shenanigans, madcap blitzes - you can get as creative as you want in attacking offenses so long as your solution answers those three questions.

Next up, we'll take a deeper dive into some specific defensive fronts and the ways that they address the threats posed by modern offenses. As always, if you've got any questions or suggestions for other things to look at then don't hesitate to fire away.