Aggie Football is #1! In offseason criminality.

The Aggies are fitting into the SEC quite nicely.

Share All sharing options for: Aggie Football is #1! In offseason criminality.

Texas A&M currently leads all FBS schools in 2014 offseason criminality.  But recruiting is kicking ass!  As to when the former affects the latter remains to be seen.  At some point the recruits who aren't being raised free range will begin to wonder if having to keep their personal items in a safety deposit box instead of their dorm room makes for a fun team environment.

For some context, all of the football schools in Texas who are not A&M have combined for five offseason arrests.

The latest was a solid shoplifting effort by DB Victor Davis at Kohls. 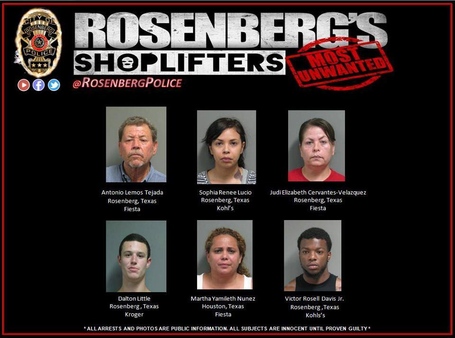 A&M isn't just leading the state of Texas - they're currently leading the entire Big 12 conference in the Fulmer Cup standings and have doubled up the entire Big 10.  With a strong finish, they're fully capable of eclipsing the entire Pac 12 as well.  USC, Wazzou (the current #2) and Oregon play in the Pac 12.  Oregon has been known to have active Crips on their roster.  So that's incredibly impressive.

More worrying than Kevin Sumlin's inability to enforce basic standards is the evident lack of speed and guile that's rife throughout the Aggie roster.  It does not bode well for this season's results.  The average store security guard is a morbidly obese man riding a Segway.  He shouldn't be walking down your nickelback in the parking lot.  Do you think Bennie Blades ever sweated a mall cop?  Where is your SEC speed?