Share All sharing options for: 2008 Kansas Football Preview - State of the Union

While the rest of the college football world went about their business last year, things were clandestinely happening in Kansas. The clues were there to any sports reporters who were paying attention. Raw materials from Texas being shipped to Lawrence. Intellectual know how taken from the breakaway Republic of Oklahoma. And a whole helluva lot of yellow cake. Mostly from Duncan Hines.

Kansas was building a football team.

They unleashed the equivalent of an atom bomb last season by winning the Orange Bowl and finishing in the Top 10. No secret to their success. They were a solid well-coached football team who mastered the fundamentals and did not beat themselves. They have to replace some weapons in their lineup, but they haven't used up all their arsenal. Not by a longshot. They've still got Fat Man and Little Boy.

Kansas also recently completed their Anderson Family Football Complex. If you're going to compete against Texas and OU, you need to have the facilities. Mangino is also using it to hoard the spice melange and vows to overtake the House Atreides as the dominant power in the North. You can take the Harkonen out of Arakis, but you can't take Arakis out of the Harkonen.

The Little Boy in Kansas' arsenal is diminutive quarterback Todd Reesing. Reesing is a 5'10" quarterback from Lake Travis whose turnoffs include festival seating and tape measures. He had a breakout year at quarterback last year after hitting puberty. I've always felt poor quarterback play is what stopped Mangino from having greater success at Kansas. That and the fact that it's Kansas. Reesing is another empirical data point showing that size just isn't that important to a quarterback. In certain systems. On the college level. You can't stop him. You can only hope to call an Amber Alert to contain him.

Either Jake Sharp or junior college transfer Jocques Crawford will try to replace Brandon McAnderson at tailback. Whom to choose?! A vexing question indeed.

Sharp actually had about 800 yards rushing last year, but a majority of them came against Toledo, Central Michigan and Baylor. Tree. Forest. No one is listening. Crawford's Kansas bio says he likes to 'walk on the beach, ride horses, shop, text...' So I guess in order to get oral from 15 year old girls, you have to know where to find them. Too soon? Crawford has a ton of potential though. I'm hoping that Sharp gets the starting job because I was a big fan of Jake and The Fatman.

Dexton Fields and Dezmon Briscoe are both excellent receivers. They are nicknamed D&D because when combined with an elf they can be entertaining for a couple of hours. Anything longer than that and you just want to go watch a replay of the Kansas basketball team's win over Memphis. Depth will come from backup quarterback Kerry Meier. Meier could have talked shit and transferred to Emporia State when he lost the job to Reesing, but that type of behavior and the teaching of evolution are frowned upon in Kansas. I have no idea who the tight end will be, but it's Kansas. The best tight end on campus will invariably be playing small forward for the Jayhawk basketball team.

The offensive line has to replace both tackles. If anybody can find some replacements, it's Mangino. Been a fan of his offensive line coaching ever since he created a serviceable line at OU out of three walkons, a converted defensive end and Bob Stoops' unresolved issues with his father. We'll see what Mangino pulls out of his ass when they play George Selvie and South Florida in September. They're set in the interior though with three seniors. Center Ryan Cantrell is one of the best in the conference at his position, something Kansas hasn't been able to say since Scot Pollard graduated. Mangino speaks highly of freshman tackle Jeff Spikes, and depth will come from Australian juco transfer Nathan D'Cunha. His highlite video is quite impressive:

Former co-defensive coordinator Bill Young relocated to Florida, as people his age are prone to do, but his ‘You kids get off my lawn!’ defensive philosophy served Kansas well for six years. Co-defensive coordinator Clint Bowen now gets the full time gig so don’t look for many changes. Young left him nine starters, a bag of Werther’s Originals and an office that smelled like the inside of my grandma's purse.

Kansas has the best linebacking unit in the conference. They’re not the most athletic group, but they’re rarely out of place. Ninety percent of defensive success is just showing up. See Young v. Reid, 4th and 18 (2004) for a dissenting opinion. Senior James Holt is the comedian of the group. When asked on the KU football site where his favorite place to eat in Lawrence was, he replied ‘Braum’s (if we had one).’ Well played, sir. The best pro prospect is Mike Rivera. He’s big and can run. Middle linebacker Joe Mortensen was 1st Team All Big 12 last year, and his pre game ritual is slapping Rivera in the face. You have to respect that.

Brorsen, Larson, Blakesley and Haselhorst. Great name for a St. Cloud law firm. Not so great for a Big 12 defensive line. The defensive line’s job at Kansas is to keep blockers off the linebackers or at least it should be. They were solid last year, but nothing special. Returning senior DE starters Russell Brorsen and John Larson are both academic All-Americans. So if you asked to come up with a description for their pass rush, they can find multiple synonyms for the word 'anemic.' Brorsen plans to go to dental school so at least he's a sadistic fuck. You need at least one of those on your defense. Starting tackles are senior Todd Haselhorst and junior Caleb Blakesley, who entered Kansas after wandering the plains for forty years. Neither of them will be as good as the departed James McClinton. If they can cockblock opposing linemen for the linebackers, they'll have done their jobs. Kansas has some young players on the line who will provide depth and hopefully start, but because it's Kansas no one has ever heard of them.

Aqib Talib was renditioned to the NFL in April leaving behind some big shoes to fill along with eleven wives. Senior Kendrick Harper will try to replace him. Future star Chris Harris will start on the other side. They return both starting safeties from last year, Darrell Stuckey and Patrick Resby, and also Justin Thornton. Thornton started the final four games in place of the injured Resby. Teams with above average quarterbacks tended to pistol whip them even with Talib though often making him the equivalent of an Egyptian MIG-21 in the Six Day War.

So what's in store for Kansas? Well, the schedule just got a lot tougher. Gone are Baylor, Oklahoma State and A&M. Replacing them are OU, Texas and Tech. Throw in a road game at South Florida and Missouri in Kansas City and you have a rough slate. They have to replace some key players on both sides of the ball, but they have a strong returning nucleus. They've tasted success, and they want more. And Mangino wants something he hasn't seen in almost nine months.

Another piece of fruit. 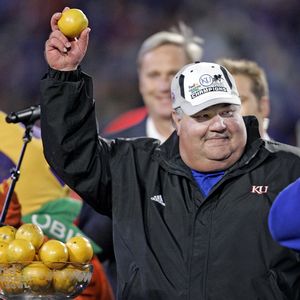