Share All sharing options for: 2009 Oklahoma State Football Preview: State of the Union

A.D. Mike Holder: Lester Miles is a very steady young man. We're lucky to have him coaching our football team for us.

Mike Holder: It's got nothing to do with environment! With his genes you could put Miles anywhere and he'd come out on top. Breeding, T. Boone, same as racehorses, it's all in the blood.

3 months later, Lester Miles takes the job at LSU, replacing Nick Saban. Oklahoma State is left in a precarious position on the cusp of respectability, about to corner the market on grade risks that Texas schools can't admit and character risks that Charles Manson wouldn't recruit. The next hire is crucial.

It's a few days later, at Mike Gundy's job interview:

Pickens: You're from a broken home, of course?

Mike Gundy: It was broke so what!?

Pickens: You have a history of juvenile arrests, I presume, drug abuse, reform schools, Sooner siblings, and the like?

His fire, passion, and devotion to pertroleum-based hair care give T. Boone an idea.

Pickens: Given the right surroundings, and encouragement, I'll bet that that young man could run our program as well as your man Miles.

Holder: Are we talking about a wager, T. Boone?

The great Sooner Jr. experiment has proven two things so far. One, you can only put so much bright orange lipstick on a pig, and two, you shouldn't invest your billions in an economy based on Jorge the gardener paying off his $750k mortgage.

OSU has managed claw itself into legitimacy by beating the mighty Sooners two out of three years during the Lester Miles era. QB Josh Fields was an underrated gem of a player and the secondary was always more talented than it had any right to be.

Then Miles bolted and left the fledgling program in the slap dick hands of Cale Gundy's brother. Mike Gundy named one of this kids Gunnar, for christssake. He's managed to keep OSU on the fringe of the top 25 by putting down a home base in Houston and taking everyone who can't pass the TAKS but can follow a playbook made up mostly of pictures and short, repetitive sentences. 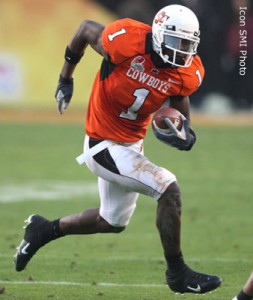 OSU's offense is the kind of unit that scores 55 ppg against the weaklings and 29 ppg against the good teams. Actually, they are exactly that team (that 29 points is inflated by the let-them-score-right-quick gameplan exhibited by OU during last year's beauty pageant, the equivalent of letting your 5 year old wear a thong on stage) and get exactly that amount of respect. It's one thing to score 58 on MIssouri State. It's another to score 20 on Texas . . . Tech.

Most teams score inconsistently thanks to inconsistent QB play, and OSU is no exception to this rule. Zac Robinson takes Chase Daniel's place as the Big XII QB with amazing ability that he never manages to cash in. He makes decisions about as well as a drunk co-ed in a lawless Caribbean country and at half the speed, but he's got the talent to hurt you when he makes the right one. He's faster than he looks (he's white) and has a knack for picking up 3 extra yards to end plays. He's accurate enough to scare us and flaky enough to scare OSU fans.

Junior Alex Cate will back up Robinson. One of the top recruits in recent years from the state of Utah, he's managed to throw 5 passes for an actual college football team! Strong stuff from the Mormons. You know he's tough because he didn't burst into flames the first time he drank moonshine.

Running back is a strength for OSU. Kendall Hunter is as good a back for this system as anyone else in the country. Tough, squat, quick and smart, he's as close to Barry Sanders as Stillwater will ever see again. This is both a good and bad thing.

Dexter Pratt made it to campus thanks to whichever Asian kid at his high school looked the toughest on SAT day and has potential to be a difference maker. Keith Toston will still be the primary back up and still be just OK.

It goes downhill from there. The next best guy is noted for his blocking and special teams contributions. Hey, maybe he can be another Jamaar Taylor. Justin Blackmon is the promising freshman with speed to burn. He'll scare Iowa State and Earl Thomas will have to look at the program afterwards to find out the name of the kid he shut out earlier in the afternoon. Sophomore Hubert Anyiam has a name like a Jewish accountant and stats to match.

Brandon Pettigrew leaves a massive shoes to fill at tight end. Not only was he a devastating blocker, but I don't think Texas ever managed to have anybody within 5 yards of him in coverage at any time in the last two years. With him and his talent gone, primary TE duty falls to Greg Smith. His actual name isn't important. Jamal Mosely is the potentially good receiver that will potentially play all the time after Zac Robinson potentially stops wasting effort on throwing to a small tackle. Colt McCoy feels your pain, Zac.

The games will be won or lost up front, because Robinson and Hunter need room to operate, and OSU has as good a pair of tackles as anyone in the country, Russell Okung you are familiar with as the potential top 5 pick that limited Brian Orakpo to a mere 1/7th of his seasonal output last year. OK, disregard that. He's big, fast and strong and will be able to dominate anyone not on their way to an NFL future. Brian Bond is their Adam Ulatoski. Not as good pass protecting, a little better run blocking.

The interior of the line struggled at times last year, especially against Oregon in the Holiday. Center Andrew Lewis will play center this year and can play anywhere along the line, which means he isn't good enough to stick in one place. Jonathan Rush and Noah Franklin are typical Gundy guards -- big, athletic, well coached, and probably only decent.

Gundy's offenses are well designed but poorly thought out.. They do things at the wrong times and fail to use the clock to their advantage late in games. Zac Robinson manages the team like a bored Target shift manager. They have to be explosive to win, but after Bryant and half a game's worth of Robinson, it probably won't be there.

The defense is mostly made up of players Texas cooled off on somewhere during the recruiting process. Ugo Chinasa, Orie Lemon, and Parrish Cox head the list of guys that Mack was OK with not having. Chinasa led the team in tackles for loss and dashikis in closet. The bodies on the line are just like any other not-quite-there-yet school. Good size, good speed, weak pass rush. They had a very good blitz package last year and needed every page of that section in the playbook. Richetti Jones will try to add something from his electric mobility scooter.

The linebackers are a strength, or would be if they played in the Big 10. Andre Sexton is the bright spot. He has the speed of a converted safety but plays strong enough to overcome his size. He's flanked by Lemon and Patrick Levine the way Jack White is flanked by his sister. As long as OSU plays a running team they'll be fine. People still run, right? New DC Bill Young always has good linebacker play, so they'll probably be disciplined and blow coverages in a uniform, hustling manner.

The backups of note are all special teamers with potential to be not horrible starters. This is not a terrific thing, since every one of the starters is a senior and they are not going to stop playing football after this year. Donald Booker as potential, a big hitter with good speed who can't beat out Orie Lemon.

The secondary has been a surprising strength in the last decade for OSU. They always have some strong safety with NFL potential slumming it for them instead of driving red Porches in Norman. Well, rules were meant to be broken. Parrish Cox is not the punchline to a tasteless joke about a New Orleans altar boy, but OSU's best defensive back. This is like saying that Alex Cate is one of the top recruits from Utah in the past couple years. He's fast and a good kick returner but isn't particularly skilled at anything other than smoking weed while his tutor writes his term paper. The other corner is Terrance Anderson, a senior who's never started. This should end well.

Discontinuing the proud Cowboy safety tradition are Victor Johnson and Tarantinoesque Lucien Antoine. Johnson is a youngster with a high ceiling, but Antoine is a senior known for hitting with a bad knee. This should end well. The backups have speed to burn. Markelle Martin and Johnny Thomas are both sophomores used mostly on special teams last year, senior Maurice Gray is a 5'8 sprinter for whom speed isn't an issue. Just ability and size.

DC Bill Young spent last season in Miami being not old or Cuban enough before fleeing to the bright lights of Stillwater. He helped put together and extremely overachieving defense in Kansas before hopping to the East Coast, so should he stay put OSU fans have a lot to look forward to. It's like an airshow or monster truck rally that happens 14 times a year! He'll also bring back a working knowledge of most black market firearms should Bedlam get out of hand.

Their kickers are . . . kickers. They have feet.

Overall it's a team that would win the MAC and a coach who wanders off to play sudoku when his offense isn't on the field. Not a great pick me up for the defense, generally. They haven't been using T. Boone's money to rent more Hart Lee Dykeses, instead opting to build the best looking thing in Oklahoma, which is like saying Alex Cate is one of the top recruits from Utah in the last couple years. They dodge Nebraska and Kansas but have to play Georgia again, who is OSU in reverse, but better. Eight wins is a good season, nine is worth celebrating. Twelve is worth one dollar.