In the times of Ancient Rome before the empire, there was a man called Cato the elder who had a calling in life to warn the Republic of a great danger. He was a Roman statesman who took note of the events of the first two Punic Wars with their rival Carthage and repeatedly declared:

Rome had just survived the 2nd war in which the Carthaginian general Hannibal had ransacked the Italian peninsula for years in the previous war and held the entire state captive in fear. After two Roman armies were destroyed confronting him, the Romans were forced to hole up and wait for him to tire of mercilessly savaging their countryside without delivering a death blow.

Finally, the ingenious Scipio Africanus (yeah, that should be turning on the light for some newer readers) invaded North Africa and threatened Carthage itself, which induced Carthage's aristocracy to recall Hannibal to defend them, and there Scipio destroyed Hannibal's army with a force trained in the Carthaginian's own tactics.

Despite this eventual victory, an important fact was firmly imprinted in Rome..."it's us or them."

Consequently, Cato repeated his mantra before the Senate tirelessly, even after speeches that had nothing to do with their feared rivals.

Carthage must be destroyed.

So must the Oklahoma Sooners, yet Texas is wholly incapable of that at the present time. We stand at an important crossroads in the program's history. The bungled launch of the LHN, departure of A&M, and subsequent rise of the Big 12 will not coalesce into a positive narrative for Longhorn nation if these problems aren't corrected. Mack has demonstrated that he has zero comprehension of the fact that the Roman Empire will not emerge if Carthage is still standing.

So "Mack Brown must go" is going to be my mantra until it happens.

With that out of the way, I'd like to examine how Oklahoma stopped our run game because this is going to be the essential point on which our season will hinge. If Texas can't run the ball, they will be repeatedly stomped throughout the year by teams that can do so against Diaz's impotent defense.

I'm going to examine two plays early in the game that demonstrated how Oklahoma dominated the Texas offense from the start and set the tone for the entire game.

In the first drive Harsin brought out the 4 WR packages that we hoped would allow Texas to run the ball.

OU brought pressure on 1st down with their pass-rush terror Corey Nelson who batted the ball at the line and forced 2nd and 10. Then Harsin brought the favorite weapon of spread coordinators: the Inside Zone packaged with QB reads:

Texas is in 11 personnel facing OU's standard 4-2 nickel. They have Colvin playing close on the boundary receiver to deny easy throws, their DT's lined up over the guards in order to engage them in the run game, and their two linebackers positioned to handle the pass and pursue the run with angles.

UTEP hammered OU repeatedly with this tactic and here you can see the defensive end Ndulue and Mike backer Wort reading the play before committing. 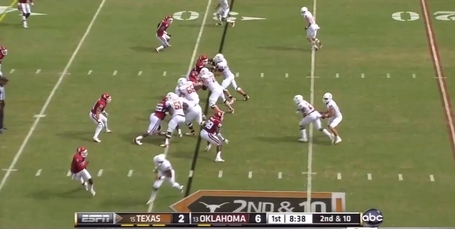 Because of Ndulue's positioning to bring down the RB for a loss, Ash is looking for his 2nd read to the TE in the flat. Now, the effect of the field side screen and Wort's hesitation means that there could be creases for the running back, particularly behind Espinosa's likely down block on Wort, but it's too late for that now.

Next we see that Nelson has taken away the TE and Ash is left to try and cut upfield and run with Ndulue in pursuit and Jefferson screaming downhill. Because Nelson and the nickel took on the routes, the safeties haven't been compromised by run/pass conflict. 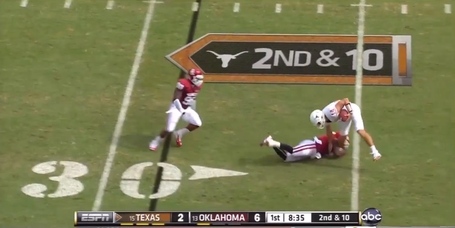 You can see here how quickly Jefferson arrived and how soundly he tackles Ash. His ability to react to plays and offer run support in their Palms (2-read) coverages makes a huge difference for their defense.

The upside of this play is: Harsin had a plan to attack the backside of the Sooner defense and lo and behold they've cleaned up their play since UTEP! What a shocker.

3rd and 13 against the Sooner pass-rush and secondary was basically a death sentence for every Texas drive.

Something you'll notice from that play and this next one is the impact of the Sooner DL on Texas run game. Bested by the Sooners in space, Harsin brought big personnel on the next drive to try and find a positive play to build a drive on.

Oklahoma lines up in the same look only they substitute Frank Shannon for Tom Wort at middle linebacker, play Nelson on the strongside, and bring in Senior Joseph Ibiloye on the weakside. Base 4-3 personnel rather than their nickel formations.

Harsin is now facing an additional OU linebacker with an additional Texas TE/HB. That's losing math against most teams but against the Sooners you can be sure that solving the resulting equation will require an understanding of integers. They also remain in a 2-deep shell with Colvin tight on the boundary receiver.

Right before the snap, Texas motions Goodwin across the formation for the Inside Zone sweep play. Colvin immediately gives chase and Ibiloye steps down closer to the LOS to ensure a sound defensive response.

Contrast this with Texas' play against motion throughout the year and notice the immediate, 2nd nature response of the OU personnel to address the changes. Interesting these fundamentals, no?

In this shot, OU lines up their DT's over the guards but they still play 1-tech and 3-tech, filling the A-gap and B-gap respectively. The difference is that OU's alignment is actively looking to engage the guards rather than align the DT's to penetrate past them. It's an entirely different philosophy. If you are trying to shoot your DT's upfield you necessitate a double team, get a tackle for loss, or take away angles for the running back and guide him into the linebackers.

OU's approach here is intended to protect the linebackers. You lose opportunities for tackles for loss by the DL but you ensure that the back can't slip through a crease for a huge gain while the the linebacker is on his heels facing an OL looking for work after the DL flew past him. 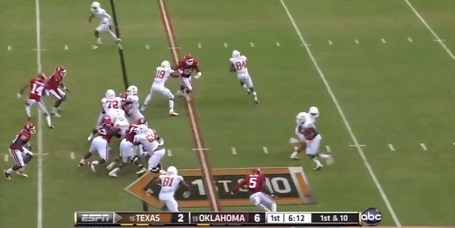 Had the play been a sweep it is likely that King's play on top flying upfield against the block of #19 DJ Grant would have blown up or spilled the sweep to pursuit, but it's an inside zone.

On bottom, Ibiloye has also flown upfield past the block of #81 Greg Daniels.

The backside defensive end Washington is inside of Hawkins and the Mike backer is looking to fill the backside C-gap behind him. Neither of the double teams have had much luck yet in blowing the Sooner DTs off the line.

Washington's penetration combined with the negation of Texas edge blocking surfaces, forces Gray into the playside A gap.

Espinosa can't come off the block of the Nose tackle and Hopkins can't reach #20 (Shannon) from reaching the A gap.

The Sooner DT's reduce the gap into a tiny hole with their obstinate push against the double teams, Nelson is pinching back inside, and Shannon has has free reign to come all the way back to the other side of the nose tackle and fill the A-gap. You can seen Espinosa desperately trying to reach him and come off Walker but he has zero luck in doing so.

To summarize: The OU middle linebacker was able to play two gaps (not by design) and fill both of them without engaging an offensive block at any point in the process.

The Sooner DT's owned the Longhorn interior OL all day long and made possible plays like this in which the defensive backfield was free to flow to the ball.

The Pellini brothers established in 2009 how you can have a small back 7 and not be destroyed by the running game in the Big 12 if you field a big defensive line.

I have trouble believing the heights on Macfarland or Walker as they both have low centers of gravity. This is a physical but squatty group. The danger with a DL of bull-rushers and run-stuffers like this is successfully generating a pass-rush.

However, you don't need a dominant pass-rushing defensive end if you can collapse the pocket with your DL as a unit, are strong in coverage, and have pass-rushers at other positions. When they need to create pressure in passing situations, OU can go small on the DL and bring linebackers with zone or man blitzes. Otherwise, the steady pressure of their line is generally adequate given the play they get from the back 7.

So beyond revealing an inadequate plan of attack by Harsin & Co, what have we learned? The Longhorn offensive line that came out on sunday was a physically soft unit. Oklahoma's DL, while solid and disciplined, are not demi-gods. Texas will face comparably strong units this year. They already did against Okie State and held up okay.

Baylor has an atrocious run defense and should yield 200 yards to this offense (or else this season is well over) but TCU, KSU, ISU, and Texas Tech have some defensive tackles and linebackers that will absolutely stuff play of the level we witnessed in the Cotton Bowl.

A Texas team that can't run the ball or stop the run is one that will be trounced in any conference, even the Big 12.

Toughness has to be instilled at the top or you can expect more still shots of kill shots.