I’ve never seen an ocelot in the wild, the inside of a tornado, or anything funny by Carlos Mencia. But one thing I may check off my bucket list soon is watching a Rick Barnes team playing in the Big 12 tournament like its post-season life depends on it . . . which it very well does unless the Horns get scorching hot in the final games of the regular season. 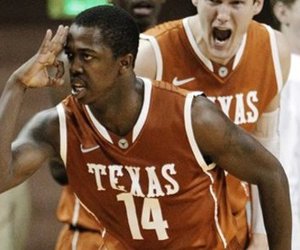 Whatever, it likely will take some combination of regular season and Big 12 tournament magic for Texas to extend Rick Barnes’ perfect NCAA tournament attendance record to 14 in a row. This week’s sweep of Texas A&M and Kansas State probably puts Texas in a better position than it was at the beginning of the week when two prominent bracketologists couldn’t decide on which side of the bubble Texas resided:

But if nothing else, the events of the past week enable Texas fans to focus on four teams down the stretch: Texas (naturally), Kansas State, Iowa State, and Baylor. Unless the Horns win 5 of their last 6, they’ll likely need at least one win at the Big 12 tournament to make the NCAAs. That’s where those other three teams come in.

Texas will be in much better shape, historically speaking, if it can finish ahead of the Wildcats in fifth instead of sixth. Here’s why you want to avoid the sixth seed. In the 15 years of the Big 12 tournament, the third seed is 12-3 in quarterfinal games against the sixth seed (or a lower seed). Sixth-seed Oklahoma upset third-seed Colorado in the very first Big 12 tournament. The only other 6 vs. 3 upsets were in 2006 (Nebraska over Oklahoma) and 2008 (A&M over Kansas State).

Contrast that with the 4 vs. 5 matchup where the fourth-seed’s edge is only 9-6.

Assuming that Kansas and Missouri hold on to the top two spots, and Oklahoma State doesn’t make a surprising surge up from seventh, the Big 12 quarterfinals should feature the four schools mentioned above (Texas, Kansas State, Baylor, and Iowa State) taking all four of the slots in the 3 vs. 6 game and the 4 vs. 5 game. (Even though Oklahoma State is only a game back of Texas and K-State, the Cowboys finish with three tough games: @Kansas State, @Missouri, and Kansas at home.)

How Does Texas Get the Five Seed?

With six games left, Texas has a decent shot at a 9-9 conference record. This is based on adding the following results to the current 6-6 record:

Although Baylor stumbled a bit this past week, there only a few teams (Missouri, Kansas) that give Baylor matchup problems. Texas, with a small, young front court, isn’t one of them.

As for Kansas State, I’m projecting an 8-10 conference record based on these results:

Some may argue that K-State's road game to A&M or a home game against Oklahoma State are probable wins. If so, that would get Kansas State to 9-9 as well.

How Does Texas Upset a Higher Seed?

One way is if either Baylor or Iowa State mails it in. Teams who already have a ticket punched to the NCAA tournament sometimes prefer an early exit from a conference tournament and the rested legs that accompany it. Roy Williams resides in that camp. His Tar Heels have won two national championships (2005, 2009) and didn't win the ACC tournament either year.

There are plenty of examples of the inverse relationship of conference vs. NCAA tournament performances. Consider two case studies from Texas Big 12 tournament history.

But what about Baylor and Iowa State?

Three weeks out, it’s hard to project just how motivated either of those teams will be in the Big 12 tournament. However, it’s reasonable to expect somebody will be flat as only 3 of 15 Big 12 tournaments have featured the top four seeds in the semifinals.

About the only thing to do now is consider the possible matchups. If Texas does edge Kansas State for fifth place, the Horns would probably be better served if Baylor grabbed the third seed. That would put Texas in a 5 vs. 4 quarterfinal game with Iowa State, a team that split with the Horns this season and doesn’t dwarf the Horns in the paint.

So when the smoke settles in four weeks, the best I would expect would be finishing the regular season 5-1 and then splitting two games in the conference tournament. That would give Texas a 22-11 record and wins over at least four members of the RPI top 50. While that would probably be good enough, that’s not what I expect to happen.

I think 21-12 or 20-13 are more realistic and I’m not sure whether that will be good enough to punch a ticket for the Big Dance or not. What do you think?