Another productive week going 4-2 and hitting on both my two unit plays. That runs the overall record to 16-10 up 8.8 units on the year. Hopefully the seven of you following this thing have been riding the wave.

On to week 13 and hopefully more winners. Sorry that these write ups are shorter, but hopefully they'll be just as profitable. Rest assured that I've spent the same amount of time capping them as my longer writeups.

Arizona -2.5 vs. Oregon State. 2 units We'll get to the biggest play of the weekend right away. The angle here starts with the understanding that Mike Stoops always wins a big home game in November. It's as traditional as cranberry sauce. 2006 it was ASU, 2007 it was Oregon, and this year it will be Oregon State, a team that is trying to hold off USC for the Pac 10 title by winning out.

In the last 3 games the Beavers seem to be running on fumes and borrowed time. OSU squeaked out a win vs. a bad ASU squad, were tied at halftime to a horrendous UCLA team, and barely held off Cal to preserve a win at home. They'll face a jacked up Arizona team in primetime. The Wildcats should be able to move the ball on Oregon State through the air as most teams do. Defensively, they can limit the Beaver rushing attack and force mistake prone Lyle Moevao into some poor throws in the desert. I think Arizona gets it done by double digits with OSU possibly looking ahead to Oregon next week. Arizona 35 Oregon State 21.

One of the best kept secrets in the ACC.

NC State +12 @ UNC. 1 unit. Tom O'Brien has his boys firing on all cylinders defensively and showing more than a pulse offensively with the emergence of dual threat QB Russell Wilson. If you haven't had a chance to watch Wilson play, try to. He's a budding a star. Star LB Nate Irving showed he was healthy last week with a dominant game in a win vs. Wake. UNC could be in trouble now that it seems to be in the throes of a quarterback controversy after a loss to Maryland last week. TJ Yates, the starter earlier in the year, is back and current starter Cameron Sexton could be looking over his shoulder with every bad throw after a terrible performance against the Terps. I like this to be a field goal game either way. UNC 24 State 21.

Illinois -2.5 @ Northwestern. 1 unit. Look, Northwestern may be the most overrated team in the nation, with an 8-3 record that screams smoke and mirrors. They've had fluke wins against Iowa and Minnesota, games they had no business winning statistically having an 8-2 turnover advantage in those two games. They are also the beneficiaries of scheduling in that they didn't play Penn State and caught Michigan in the midst of the worst team turmoil in that program's history. Illinois is coming off a game against tOSU in which it outyardaged the Bucks 455 to 355, moving the ball through the air and on the ground with equal success. The Illini should find the offensive sledding much easier this Saturday. Illinois has to win to be bowl eligible and I think they get it done. 31 to 21 Illini.

Michigan State +15.5 @ Penn State. 1 unit. Did I miss the meme that the Nittany Lions now field an explosive offense? Explosive enough to cover a monster number like 15.5 against a top 15 team while playing in a Big 10 shortened ballgame? Are Todd Blackledge and Larry Johnson suiting up for Paterno this week? Way too many for Penn State to lay against average competition much less a team that can run the ball as well as Javon Ringer and Sparty. Close game that stays within the number...Penn State 24 Spartans 17. 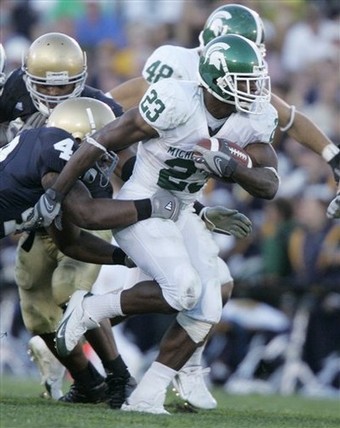 Clemson -2.5 @ Virginia. 1 unit. Clemson is starting to round into the form that had prognosticators rank them top 10 preseason. Shit happens. Welcome to the party Tigers. Virginia has struggled to move the rock on Miami and Wake Forest in back to back weeks. How will they move it on the ACC's best defense? Clemson should have a 3 game winning streak if you throw out the fact that Tommy Bowden gave his daddy the Clemson playbook after being ousted by the Tigers a few weeks ago. No fair, I say. Clemson still has a shot at a bowl and they'll smother a bad Cav offense. 21 to 14.

Good luck on all of your action and check out ded's tortilla retort for some more picks. I like the Tech pick. Seven points for an undefeated top ranked team? The Boise pick is another good one. Never ever get on the wrong side of BCS money unless the line is ridiculous.