Senate Stays On Offensive; Passes Bill That Could Protect Powers

Share All sharing options for: Senate Stays On Offensive; Passes Bill That Could Protect Powers 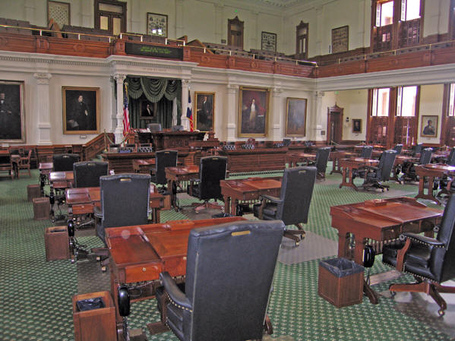 With very little discussion and almost no debate, the Texas Senate passed Senate Bill 15 yesterday, which could make it more difficult for rogue elements on the UT System Board of Regents to fire UT President Bill Powers. The measure passed by a decisive 29-2 vote, with Senators Birdwell and Paxton being the only nays (which is not uncommon for either of them).

Among other things, the bill would prohibit any university system board of regents from firing the president of one of its component institutions without first receiving a termination recommendation from the system's chancellor. What does that mean for Powers? At least up to this point, UT System Chancellor Dr. Francisco Cigarroa has arguably maintained his independence relative to the desires of some of the anti-Powers regents, and recently stated publicly that Powers is ably performing his duties.

SB 15 also makes various changes to the regents' governing statute that are designed to enhance the autonomy and independence of system component institutions, and clarify the role of governing boards in the day-to-day operations of individual campuses. The purpose of the changes is to curb the ability of a board to engage in the kind of micromanagement that has been the subject of several complaints from legislators regarding the UT System Board's activities. The bill would also prohibit new board appointees from voting on personnel or fiscal matters until they have at least appeared before the Senate Committee on Nominations.

House Higher Education Committee Chairman Dan Branch (R-Dallas) is likely to pick up SB 15 in the House, which is also expected to pass the bill. The question is whether the House can act quickly enough to allow sufficient time on the calendar for an override vote if Governor Rick Perry elects to veto it.

The Senate's action came on the heels of the UT System Board's votes earlier in the day to abandon both its efforts to withhold documents requested by legislators, and to hire an outside firm to conduct a third investigation of the now defunct UT Law School Foundation loan program. Both of those moves had been the subject of widespread criticism from key legislators and the media, but the board's course correction was greeted with skepticism at the Capitol.

With SB 15 on its way to the House, three other legislative initiatives remain in play. The first consists of the riders to the general appropriations bill that were attached by House Appropriations Chairman Jim Pitts that hit the UT board right in the shorts by eliminating its discretion to spend Available University Fund proceeds for its own purposes. It's difficult to understate the effect of these riders, since they go a long way toward stripping the board of its purse power for the next biennium.

Second, Governor Perry's three nominees to the board still have yet to appear before the Senate Committee on Nominations, where they are certain to face a stern grilling by UT-Austin supporters who will be more than willing to use Powers as a litmus test. Finally, there's the issue of the documents that are now forthcoming from the board. If improprieties are uncovered, including the assertion of undue influence from the governor's office, it could make the political opportunity cost of the more controversial Sandefer reforms and further action against Powers too high.

Meanwhile, the clock on the legislative session continues to tick towards the adjournment date of May 27th. The Legislature has been a bulwark of support for UT-Austin and President Powers, but its time to take meaningful action that has a lasting impact beyond the session is growing short.