Share All sharing options for: The Texas Pregamer:  BYU 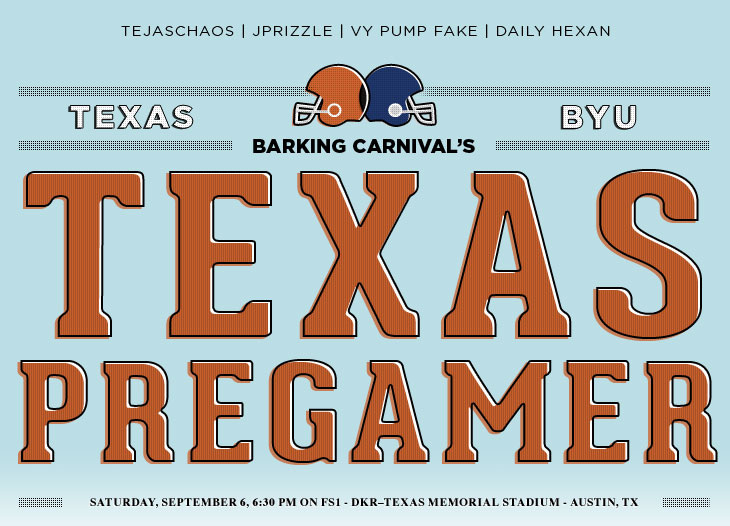 This column started out as a post-week 1 honeymoon cautionary tale. It was a celebration of the win, but a reminder that tougher foes await. There was also a whole backstory planned for Taysom Hill’s bionic leg, starting with its inception in an underground bunker full of 25 year-old BYU freshmen engineers and a T-1000 liquid metal smelting station. However, a retooling was in order after the injury report went from bad to worse.

I pulled up my rough draft, held a short Irish wake and then executed the ceremonial highlight + delete that every writer except Scipio knows all too well. As I set to work I put on some music, forgetting I still had the Remember the Titans soundtrack queued up from the draft party I hosted Sunday for my local fantasy league, How Now Brown Mao (work moved me to China this year). The first song was Titans Spirit, the main theme from the film’s score. As it played I slowly realized the song mirrored, to a "T" (for toughness, of course), the emotional ride of this week as a Longhorn fan. I quickly shifted into free writing mode, and below is the much sanitized, caps-lock-removed result:

0:00 – Strong beat, fast strings with brass reinforcement, crescendo. We just pasted UNT. Our defense dropped a goose egg on them. Sure, Dom might be out a few weeks with an ankle sprain. That aside, everything looks pretty good. Offense needs improvement, but really no one is going to score on us this season so who even cares? My excitement for this season, and the new era of Texas Football is at overexcited Jonah Hill levels.

1:10 – Bottom falls out, isolated strings, arrested tempo, but notes of resilience. News breaks that Dom’s ankle is not a sprain, but rather is broken and he will likely miss the full season. Now this is a major setback. This is the same feeling I got when Forman and Kelso left That 70’s Show. Randy Pearson? Who is that guy? That guy sucks. Oh well, not all is lost - Hyde, Fez and the gang are still around…

2:03 – Music builds again, brass is back, more determined pace. Dom is just one piece of the puzzle. I’m having visions of Jake Raulerson. Only he isn’t Jake Raulerson anymore, he’s Jake Raulerson’s head on Rocky Balboa’s shoulders. It’s the training montage from Rocky IV. A bearded, shirtless Raulerson is deadlifting felled trees and struggling through the snow while pulling a sleigh that’s holding brother-in-law Paulie which is actually Joe Wickline shouting, "Hit the one in the middle!" I’m inspired. It’s revenge week. BYU is going down.

3:15 – Everything stops, a flute or some shit is playing, sad strings are back. The Ash scratch hits the newswire. It’s utter disbelief. There were no signs. It’s tragic, considering his history. I’m jumping to way too many conclusions. Visions flash through my head of shadow-faced old men smoking big cigars, cackling maniacally as they dump a Gatorade bath of 100 dollar bills on Nick Saban’s shoulders. They donate none of it to ALS. I look closer and, instead of Benjamin Franklin, the face on the bills is a smirking Joe Jamail, one eye shut tight in mid-wink.

At this point, I’ve got a finger or four of Makers precariously balanced on the edge of my mousepad, risk be damned. I’ll live that life if I want to.

4:35 – Pace quickens, volume increases, the composer wrote ‘comeback’ in the margin. There is only one thing we say to death. Not today. Hook ‘em is on one foot, in the crane kick position a la Karate Kid. We are wounded, but determined to fight back. Someone shouts, "Get him a body bag!" 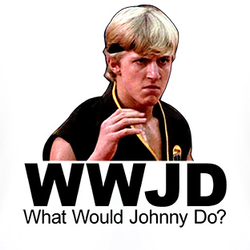 5:16 – Triumphant, the song peaks, soaring trumpets. Taysom Hill is in Soviet shorts a la Ivan Drago, splayed out upon the Longhorn logo at midfield, DKR. Cedric Reed, in US flag shorts, is lumbering off in the distance returning a fumble to the endzone. My confidence has returned in a swirling firestorm of burnt orange pride.

5:48 – Slows down a bit, but maintains the triumphant tone, denouement begins. I reach full acceptance. A season is rife with obstacles, each a challenge to be overcome on the way to greatness. This is our fate, and we will face it united. No matter the win-loss record, progress will be made. We are a new team and this is a new dawn.

Then I switched over to my George Strait playlist and the first song off the shuffle train was "Run". Revised game plan forecast from the King? 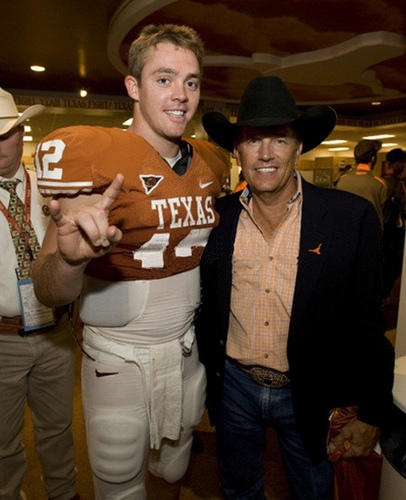 This BYU team is fantastic because they take advantage of the entire range of apostrophe* use; from "De'Ondre" to "O’Mary" to "Va'a Niumatalolo."

*A side note to our Aggie "friends" who read Barking Carnival. An apostrophe is like a comma, but at the top. And it is never used to denote plurality. 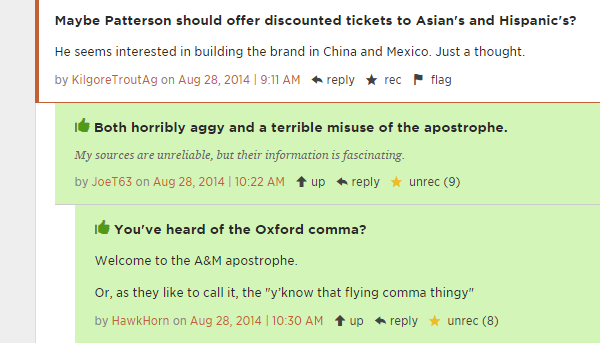 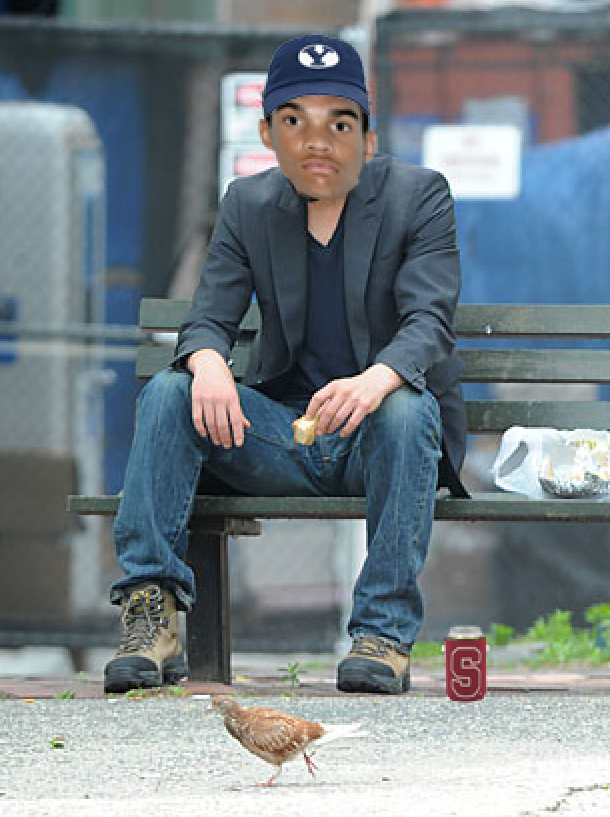 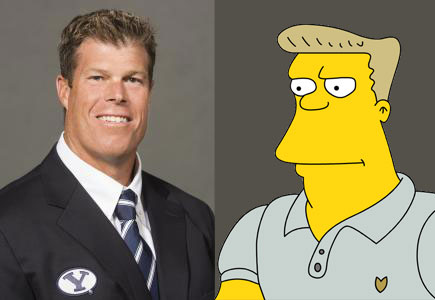 Funny you should mention that... 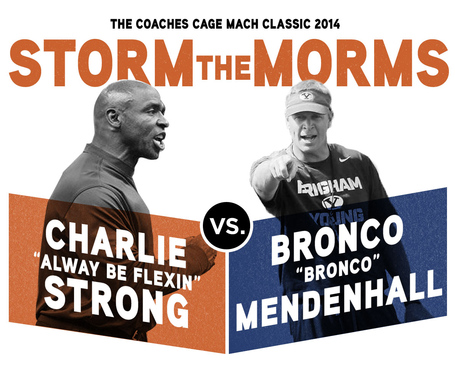 Outside the cage, he's Charlie Strong, Football Coach. Inside the cage he is CHUCKSTRONG(TM) - [Devourer of Worlds, Gridiron Groot, Titan of Tough, Revoker of Scholarships]. Each week, CHUCKSTRONG(TM) will engage in mortal combat with the opposing head coach. It is a fight to the death, or until the NCAA-mandated hour limit.

This week, the opponent is BRONCO MENDENHALL. Being intrepid, seasoned reporters, we immediately assumed that's a fake name. After #JOURNALISM, it turns out Bronco is a wanted drifter who has been associated with more than one suspicious disappearance (Craig James was unavailable for comment). Now he's chosen to lay low in the one place no one would ever look for a cold blooded killer... Provo, Utah. Thankfully, CHUCKSTRONGTM sees straight through his faux "aw shucks" demeanor and in no time has him howling out a confession, between haymakers. The fight is called on humanitarian grounds, as even a single minute longer in the cage with CHUCK is deemed cruel and unusual punishment. In penance for his crimes, Bronco is sentenced to life in THE PIT lifting medicine balls and complimenting Pat Moorer's bench press form. IT IS PRISTINE! 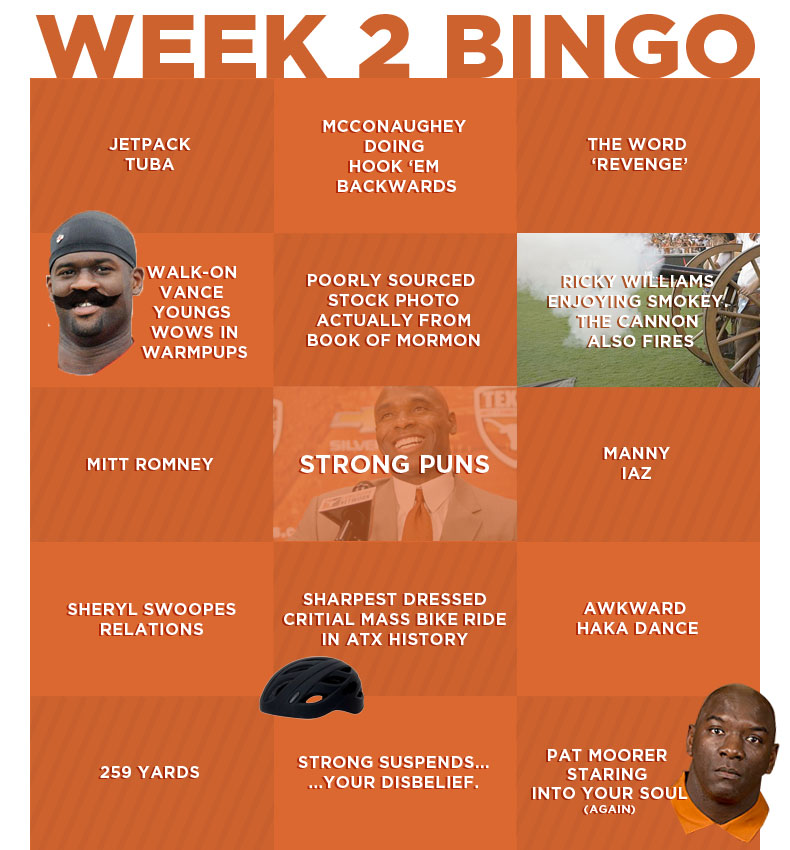 (Micheal Jordan and/or Bugs Bunny participation is not required, but would be pretty darn awesome.)

Kyle Carpenter - The symmetry is unmistakable. One year ago, Manny Diaz became the scapegoat after BYU. Then we hired Charlie Strong, who most likely will go down as the G.O.A.T someday. Mario Götze won the World Cup. Gotye is running for office. And then throw on top that I learned about Moroccan tree-climbing goats this week? 16 goats in a tree + 2 coaches - 1 musician + a lot of drunk Germans. It must mean...UT wins 27-24 with 2 defensive touchdowns! 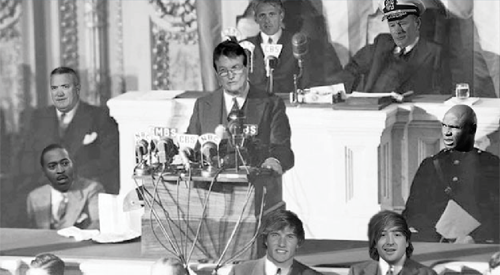 "Last year on September 7, 2013 - a date which will live in infamy - the Texas Longhorns were suddenly and deliberately attacked by the running forces of Brigham Young University…"