Share All sharing options for: 2008 Colorado Football Preview - State Of The Union

If a team emulates its coach, I'd like to administer a DSM-V to Dan Hawkins. His 2007 Colorado team embodied a whole array of disorders: schizophrenia, bipolar depression, acute psychosis, chronic bedwetting, and disassociative identity disorder. The same football team that beat Oklahoma in Boulder and whipped Tech in Lubbock was also blown out by Kansas State, lost to Iowa State, played Kansas down to the wire, and was humiliated by Mizzou. They beat Nebraska 65-51 in a game that mocked even the concept of Buddy Ryan. They lost to Florida State 16-6 in a contest where forward progress was as rare as Brazilian waxing in a Boulder Womynist sorority. I've developed a methodology that models this perfectly. Throw a coin in the air. Simultaneously, ask a small child to yell out a number between 0 and 50 before it lands. If it's heads, Colorado wins by that number. If it's tails, Colorado loses by the number. The opponent is irrelevant. Making predictions about this team is a Random Walk Down Wrong Street.

Part of the team's identity problem is that Dan Hawkins isn't sure whether he wants to be a samurai or a shaman. Or some sort of samurai shaman Subway sandwich combo. Which has only six grams of fat if ordered without mayo. Maybe he just wants to be Gary Busey or Mike Leach, which is where crazy goes to eleven. Sometimes, Hawkins is just a regular football coach and former hard-nosed fullback who fantasizes about fielding a team of bloodthirsty Cimmerian barbarians and sacking Columbia like an Aqualonian caravan; at other times he's trying to heal his pass rush with a herbal poultice, sensitively asking Maurice Lucas if "The Spread Offense Establishment" is what is, like, keeping his sack numbers down. His wisdom is a strange wash: a big white load (this also describes the CU student body) of progressive corporate team-building platitudes stained with the stray blue sock of badassedness. Add the fabric softener of aggression and you have The Hawk. Dude quotes Rumi and wears wrap-around Bowden sunglasses. How do you reconcile that?

To adequately explore an issue, one must go back to the beginning: when Dan was first born in Boulder. Dan Hawkins arrived in Boulder from Boise brimming with the confidence of a strip mall black belt. Crushing the Idaho Vandals every year is like attacking a panel of defenseless balsa wood in a cardio karate demo for an audience of pimpled IT workers tired of taking shit for believing in orcs. Want to feel like a badmofo? Pick a fight with Utah State.

Hawk Kwan Do! Who wants this? You? Get up! Your name? Utah State! Utah State, I will roundhouse kick you like a dredyl dipped in razor blades! These cheetah striped nylon action pants are not for flower arranging! Witness my scorpion-emblazoned do-rag. You think Ned's Martial Arts Supply on 14th Street sells these to pussies? I assure you, they do not. People, I'm just going to break the arm and walk away. Who wants to hang out in my sweat lodge later?

Like most strip mall black belts, Hawkins oozed certainty like syrup from a spiked maple and babbled incessant theoretical high concept nonsense. He was disabused of that hubris in the Big 12 when he realized that punches can't be blocked by imitating the motion of a disc sander. Hawk Kwan Do, honed in the kinder gentler Big West and WAC, had failed him. After his two year 9-16 effort, the mountain mystic consulted his vast self-help audio library to realign his celestial vortex. He looked within himself. To his credit, The Hawk does not believe in blame.

Just look at the word, bruthurrrh! BLAME. B-lame. Be Lame. That means blame cripples the Hawk! Deepak Chopra taught me to break down words like that.

After further consulting his I Ching and a telepathic instant message session with Dr. Wayne Dyer, Hawkins came to three powerful, life-changing conclusions:

Second, Hawkins acted on the advice of mentor Sathya Sai Baba and began to play his true believers - his young recruits. To test their devotion, he asked them to "discipline" Bernard Jackson with a rubber band and a pair of garden shears.

Third, he vowed to call only the plays suggested to him by his Spirit Animal. The beast has many names, but the Native Americans know this particular animal as 'Very Erratic Otter.'

Hawkins has a lucrative side business writing New Age corporate motivational posters. You know the ones. An obsequious aphorism captioned under a sunset over two paths diverging in a wood. The higher leading to synergistic Six Sigma, the lower to eroding market share and the eventual global dominance of China. HR idiots snap these up like Members Only in an Oklahoma coat room. Colorado's primary issue this year won't be fixed with a slogan. Unless that slogan is: Fly more to Houston and Los Angeles, Mr Recruiting Coordinator! Their issue will be team speed. I'm not saying that they're bottom of the Big 10 slow. Or Calcuttan bureaucracy. They're just not rapido.

Colorado lost two crucial pieces of their defense in Butkus Runner-Up Jordan Dizon and CB Terrence Wheatley, both NFL 2nd rounders. Everybody loses talent every year, but if you watched Colorado play, Dizon and Wheatley were the playmakers in their big wins. They beat Texas Tech by themselves and stymied Oklahoma while the rest of the defense emery boarded their cuticles. File, scratch, scratch, file. Nice play, Dizon!

Colorado's DTs are nice. George Hypolite is a disruptive Sedrick Ellis type interior DL with a good motor. His mate Brandon Nicolas is solid against the run. DE Maurice Lucas is a solid run stopper but a pass rusher so disgraceful that Ted Washington makes fun of him. Notice my liberal use of the phrase "run stopper" when describing much of the Colorado DL? I'm not talking about diarrhea medication. Run stopping is as useful as Sharon Stone after age 40 in the modern Big 12. Pray that DE Marquez Herrod is a 12 sack caliber player or else the elite QBs in the Big 12 will take scalpels to the cadaver of their secondary.

LB, a traditional strength, will take a step back this year. Obviously, Jordan Dizon was an irreplaceable guy. He was smart, quick, physical and he hit like a Lynn Katoa wielded rock. Brad Jones, Jeff Smart and Marcus Burton don't bring to mind CU LBing greats of the past, but it's hard to imagine them being less than adequate, primarily because of this man:

This is Brian Cabral. He has an amazing moustache. He has coached at Colorado for twenty years under Bill McCartney, Rick Neuheisel, Gary Barnett and now Dan Hawkins. He does something very special. He coaches linebackers. LBs like Matt Russell, Greg Biekert, Chad Brown, Ted Johnson, Ron Merkerson, Sean Tufts, and Jordan Dizon. That's a collection of two and three star recruits, many who didn't arrive in Boulder as linebackers, who have played a lot of NFL football. Don't be surprised if Rivals Top 100 recruit and former British Prime Minister Jon Major doesn't make an appearance in the lineup as well. Don't mistake my staff envy for more than it is - it's selective. I'm happy to have Major Applewhite instead of Darian Hagan. Although the incorporation of Crip hand signs would help our audible packages and substantially increase our street credibility with Kevin Federline.

The Buffs have some young talent on the OL. They finally have some depth as well, though they are a year away from being a high level unit. Last year's Freshman All-America Ryan Miller is a future star at OT and the only Miller product popular in Colorado.

QB Cody Hawkins is full of moxie! And interceptions. He's another dwarf from the Big 12 Norf. He's Todd Reesing without the wheels and kittenish joi de vivre; Chase Daniel without the clutchocity and gnarled gnome-like quality. He's accurate and reasonably poised, but he's small (5-11, 190) and he has an arm like Callista Flockhart. Koy Detmer is his highest level of aspiration. Aim higher, Cody.

Wide receiver has some reliable possession guys and a couple of high potential types who have done nothing. The good news is that Hawkins uses all of his packages situationally to build on strengths. The bad news is that the content of this package is three pieces of twine, a rusty nail, some toenail clippings, and an autographed picture of Shirley Hemphill. 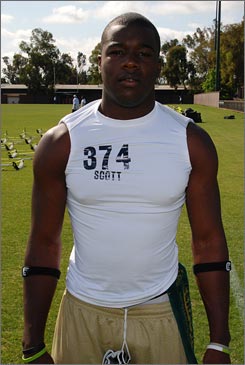 **from the Insight.Com bowl