Share All sharing options for: 2009 Kansas State Football Preview: State of the Union

The single biggest challenge in writing up anything about Kansas State, on any subject if I had to guess, is making the story interesting enough to keep the reader awake beyond the first few words. Sailor Ripley is a sick human being that needs to be wrapped in a burlap sack and beaten with reeds for putting this write-up on me. In any event, I thought of a few things that at least entertained me.

One of the mysteries of the great sport of college football is related to Kansas State. Not because it’s difficult to understand how they’ve ever had a winning record or because they exist in the Great Plains version of the Bermuda Triangle, but because they’re the only Trade School that the NCAA has allowed the ability to compete at the D-1 level. You don’t see ITT or University of Phoenix out there with a squad. My theory is that those "schools" simply care more about focusing on education than Kansas State does. KSU literally has a degree called a Bachelors of Science in Bakery Science & Management. They brag about it on their site as a selling point. "K-State is the only school in the United States that offers a four-year Bachelor of Science degree in Bakery Science and Management, and our influence is felt world-wide." That is a direct quote from the KSU school website, folks. This is not an institution of higher learning. This is apparently an institution of higher burning.

I discovered KSU’s depravity when it comes to "education" in a first hand manner. I was recruited, albeit lightly, by them in the early ‘90’s as an H-Back, or what we might consider a "Flex-TE". I was often compared to Frank Wychek, only without the speed and toughness. Apparently, for KSU, Bill Snyder, and Chad May, that had all kinds of value. I received letters and calls, and in these discussions and communications, one of the points emphasized was their football player-oriented academic programs. I was interested in the ascending program, so I looked them up. It was at that moment that I discovered that I had literally already graduated from KSU, entering my Junior year of a Texas High School. Apparently 2 years of Texas HS education and a successful sitting of the PSAT gets it done. Disturbed, I realized I needed to look elsewhere for a legitimate college education.

What a joy it would have been, however, to have taken the plunge and joined the "family" of the Bill Snyder program. Has there been a more terrifying figure within the ranks of College Football land in the history of the sport? Snyder is the perfect blend of paranoia, know-how, authoritarianism, perfectionism, and sociopathic tendencies. He likely terrifies Stalin in their séances.

Bill Snyder Is a Wildcat & a Patriot

Only his sense of duty and obligation to this nation pulled him away for a period from the KSU program. His run as VP under Bush was simply more of the same for Snyder. He took a ragtag outfit over and rebuilt it with a group of well paid mercenaries. This guy is a turnaround specialist and runs the same game in every situation. 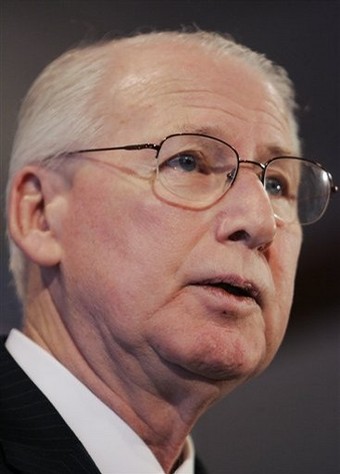 I Ran This Nation, Maniacally

Now that he’s back at KSU, he’s again up to his old paranoid tricks. This is a guy that once withheld Michael Bishop from speaking to the media for an entire season and likely cost him a shot at the Heisman accordingly. He’s notorious for hating the media and depth charts. Up until today, the guy didn’t even allow the actual posting of this season’s depth chart on the program’s official site. I am not making that up. I looked for 4 days and it is finally there tonight. That should surprise no one, I suppose.

Speaking of not being surprised when it comes to Snyder and KSU, they open the season against Massachusetts. Even if John Calipari and Marcus Camby were still running games for UMass, I wouldn’t like their odds in this one. Following UMass, they then play juggernaut twin to ULaMonroe – ULaLa. UCLA somehow got on the schedule beyond that. No doubt, Snyder is still having the person inside the AD that placed that team on the schedule waterboarded in some far off, secluded location, like Manhattan, Kansas. Things return to normal in the following week when they match up against powerhouse Tennessee Tech. Seriously. That is two D-2 teams, a Louisiana directional school, and Rick Neuheisel. That’s the rough equivalent in college football terms of going to pick up chicks at an elementary school playground with a gay guy.

Looking ahead at future schedules, in a couple of years KSU plays both Miami, FL, and Oregon in the same season. My guess is that this was allowed because the KSU brass is assuming Snyder will be dead at that point. Regardless of the future, the same shenanigans will sadly pervade that program as long as Snyder is at the helm. It is pathetic and makes him and that joke of a school all the more hateworthy.

In regard to Snyder, I hope he doesn’t have a big family, because he’s going to feel like he’s been through of a lot of their deaths this season, as this KSU team is not going to be very good and a lot of losses are going to occur.

The Offense is More Mediocre Than Canada

Offensively, the Wildcats are simply porked. I can’t put it any other way. They came out of the spring thinking that Daniel Thomas might be the next Michael Bishop. And why not? They are both Juco transfers that are dormed in padded, soundproof rooms to protect bystanders from being infected with their brand of rampant stupidity via osmosis. That theory of hope didn’t make it through the summer drills. Thomas has moved on to TB. Replacing 1st round draft pick and Jamarcus Russell doppelganger, Josh Freeman, will be some also ran named Carson Coffman. Parodying DickRod, Snyder bawled all over himself during today’s press conference at the thought of having to start Coffman. Coffman is backed up by Grant Gregory, the Undersecretary of the Navy during the Franklin Pierce administration.

Daniel Thomas did win a starting spot at TB. Former walk-on Keith Valentine backs him up. I have no idea what happened to Logan Dold, who was supposed to be a decent find after his Freshman season in 2008. Thomas is supposed to be a pretty damned good talent. It will be interesting to see how his skills translate in D-1. Word is that he’s excelling in the Baking Science program, which means he’ll certainly be around for 2 seasons.

Brandon Banks is a legitimate star at WR. He was Newcomer of the Year in the Big 12 last year, catching for over 1000 yards in 8 starts. I watched him once, and he is a repugnant midget that makes plays. He will terrify people as a tiny clown in Jackie Sherrill’s Circus of Terror when his WR career is over. He is surrounded by Perry Smith and Dick Hickok at the other two WR spots. I would not fuck with either one of those guys on the outside. Jeron Mastrud is a productive TE in their scheme. They don’t ask much of him in the passing game, but he’s good for 300-400 yards and is an excellent blocker.

The OL lost 3-4 guys. I can’t tell how many between the magazines, their website, and the Snyder PC transcripts. Listen, it isn’t like I am taking a trip to Manhattan, KS and researching this mockery of an article in person, so that’s all I’ve got. I saw this team in passing once last year and then watched the OU game. I didn’t study how many OLs were worth a shit and might be back this season. I do know that Nick Stringer is a good ballplayer at LT. Wade Weibert also might be a returner, but he might also be a character from a Coen Brothers movie. I can’t even come up with a remotely humorous concept for the 3 other guys playing OL for them. I’ve stared at their names for a while, Trevor Viers, Clyde Aufner, and Zach Kendall, for a bit. Nothing. That’s also what they’re bringing to the table in terms of experience. They’ve got roughly 12 starts between them with 5 years of experience.

On defense, the good news is that they have a few of returners. The bad news is that they return guys that played for one of the worst defenses in D-1 last season. They finished ranked 117 in D-1, trailing only SMU and the legendary Mean Green Todd Dodge Machines in total D FAIL. They couldn’t tackle, couldn’t cover, and couldn’t stay out of trouble. Several guys that would be starting on their defense are gone in a manner that Google doesn’t even understand.

The only guy worth a damn on their front 4 was Brandon Harold, a Freshman AA. He’s got a knee injury that could have well required amputation, but Snyder isn’t talking. Suffice it to say that he’s out "for some time". Indeed. Eric Childs was a HM Big 12 guy last year, simply because Prince was nice enough to nominate him. This guy couldn’t stop a toy train, but he’s starting for KSU. Neither DT has played much. Jeffrey Fitzgerald and Raphael Guidry. I typed their names, at least.

I figured out where the Minnesota Twins roster from the mid-1980’s went. It’s playing LB for Kansas State. Alex Hrebec is the short angry lovechild of Kent Hrbek and Alex Trebek and he plays with about that much talent. John Houlik started one game last season, but we’ll call him a returning starter. Rounding out this bag of farts is Troy Butler. Phil Steele refuses to acknowledge his existence, much like HenryJames and hygiene. We’re far from the days of Josh Buhl, Marc Simoneau, and Ben Leber.

The secondary at least has a legitimate ballplayer in Josh Moore. He was honorable mention All-Big 12 last year, which might be a thrown bone, but so be it. Tyson Hartman is the starter at FS. This guy is a former QB that was moved during the season last year. A veritable poor man’s Dak Pearson. Look out. The other guys are unknowns and unlikely to matter in a positive way. The secondary can’t help but get better. They were near the bottom last season and the Big 12 was not kind to them.

There is no doubt that Bill Snyder is an excellent coach and a terrible Vice President. KSU fan wants to believe that with Snyder’s return, the team will begin to play as a "family" for 60 minutes again. If they do that, then surely this KSU team will begin the climb back to prominence, right? I don’t know. Maybe they’ll just wind up playing the same amount of minutes with consistent effort as most of their opponents, only with less talent. My bet is in that direction.

They’ll undoubtedly start the season 2-0 and some idiot in the media will speak on the remarkable nature of Snyder’s new turnaround. Hopefully Rick Neuheisel, bald-faced lying douche that he is, will allow his team to bow down against KSU and take a loss. Hey, it helps the Big 12, right? Whatever. I am guessing 2-1 after UCLA, followed by a confident stomping of Tennessee Tech. They’ll then be 4-1 after Iowa State and we will honestly start hearing morons talk about Bill Snyder’s wizardry. They’ll then be stomped by Texas Tech, roll a horrific ATM team at home and be 5-2 against a mediocre Colorado team. I’ll call that a win and give them 6-2. They then close out against OU, KU, Mizzou, and Nebraska in succession. That will put them in the 6-6/7-5 range. Either way, this will be the worst bowl team of the season, shaming the Big 12 and the powerful legacy of Ron Prince and Deloss Dodds in the process.