The best edge duo in the Big 12 complements a defensive tackle group that should form one of the best defensive lines in college football. While DE's Alex Okafor and Jackson Jeffcoat have garnered plenty of preseason acclaim, will they make the jump from good to dominant? And can the players behind them provide Manny Diaz and Oscar Giles with the unit depth to attack in waves?

Let's take a walk on the edge. 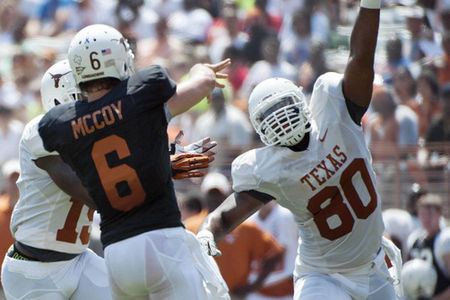 Alex Okafor. 6-5, 265. Strong enough to hold up inside at defensive tackle as a sophomore, quick and versatile enough to star at defensive end as a junior, respected enough to be considered the media's Big 12 Preseason DPOY as a senior. Last year, Okafor posted 58 tackles, 7 sacks, 14 tackles for loss, 17 pressures. Okafor is good at everything. He plays the run well straight up and out to the boundary, is strong in backside pursuit, kills screens in fire zone drops, and is a solid pass rusher. Okafor's play came on over the course of the year as he began to react in Diaz's schemes instead of reason, and it bears mentioning that he's only had a year starting at his current position.

His senior upside rests on his ability to impact opponent passing games beyond hustle pressures and grind sacks - the difference between a three step hat-on-the-QB edge nightmare (Brian Orakpo) and a very good DE (Tim Crowder). Unless Okafor makes that jump, he's not the best player on the Longhorn defense, much less the entire Big 12. 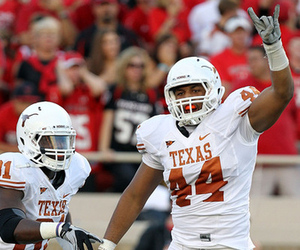 Jackson Jeffcoat. 6-5, 245. Jeffocat's game is about quickness, instincts, and skill. Jeffcoat is at his best when standing and is a potential 3-4 OLB in the NFL. Like Okafor, he came on strong in the 2nd half of the season (F6 game - 0 sacks, 4 tackles for loss; L7 games - 8 sacks, 17 tackles for loss!) but still managed outstanding numbers on the year with 71 tackles, 21 tackles for loss, 8 sacks, 9 pressures. Jeffcoat is so technically proficient for his age and experience (hat tip to father, Jim, no doubt), but he still has room to grow. Over the second half of the season, he consistently demonstrated a linebacker's intuition for play diagnosis and if he can start 2012 the way he finished 2011, Jeffcoat has a shot at putting up colossal numbers.

A torn pec muscle prevented Jeffcoat from participating in Spring drills, which was a boon to depth development, but a blow to his offseason S&C regimen. If Jeffcoat has a developmental area, it's pure physical strength, and it shows up when teams run inside of him and he can't constrict the lane. Running outside of him is a recipe for 2nd and 12. That's why I believe he'll return as a senior even with a strong junior year - a full offseason program and another year of development will allow JJ to cement his physical readiness for the league and test the way GMs like.

Here's an instructive piece of tape on Jeffcoat against A&M's formidable Luke Joeckel.

Reggie Wilson. 6-3, 259. The raw Ivory Coast product came to football late and though he possesses good power and athletic ability, the game still hasn't slowed down for him at the college level. College game speed and deception creates hesitation in Wilson and makes him play slower than he is. Wilson would have benefitted immensely from a redshirt, but no dice. While he is a junior, he's nowhere close to what he can be in terms of understanding the game, and Wilson still has the potential to take enormous strides if/when the game ever slows down for him. Like Okafor and Jeffcoat, he was much more comfortable in the second half of the season and heavy reps in Spring can only benefit him. He should be a useful sub for Okafor and Jeffcoat, at minimum, but the upside remains.

Cedric Reed. 6-6, 260. I like raw East Texas athletes who play basketball and haven't seen a weight room and Reed fits that bill. The lanky sophomore has found the dining hall at Texas agreeable and already added 30 pounds of weight to his lanky frame. Reed is coordinated, covers ground deceptively well, and his long arms present a problem for QB release points when he can get an initial push. Reed, like Wilson, benefitted immensely from de facto starter's snaps in the Spring. And like Wilson, he was pressed into action early and is still learning his way around the field. I like Reed as a solid sub, but he's still largely untapped.

At least two of the three should redshirt. They may also add Caleb Bluiett to the fold, depending on how his camp shakes out.

Hassan Ridgeway has an action figure frame, but at 6-4, 280, he may already be starting his journey inside. Like Lamarr Houston, that doesn't mean he can't pitch in at DE until he gets there. Don't be surprised if he can hold up in the college game now, but inexperience would make it difficult for him to supplant Wilson or Reed early.

Shiro Davis has great potential and has already added 15 pounds to his 6-3, 235 pound frame, but if he sees early playing time, it will be as a pass rushing specialist and a fresh pair of pursuit legs on sure passing downs. He's not ready to stuff a 260 pound senior TE on a running down quite yet.

Our DE starters are very good, the primary back-ups are both good enough to log solid snaps, but still possess some upside, and we have a promising bunch of freshman waiting in the wings. The Longhorns didn't redshirt our top four DEs on the depth chart and though we can debate the need within any given year, good programs redshirt good players all of the time, and always the developmental types. Redshirting several of the freshmen will be a sign of program health, not weakness.

While Okafor and Jeffcoat have the potential to be a great tandem, good DT play, stunting at LB and SS, and a lock-down secondary give them the potential to feast on easy meals flushed from the pocket and coverage sacks. Whether they're good or great will be determined by games against West Virginia, Oklahoma, even Texas Tech in Lubbock, when we ask them to rock the opposing passing game bringing four and denying them the quick routes.