Share All sharing options for: The Texas Pregamer:  Kansas 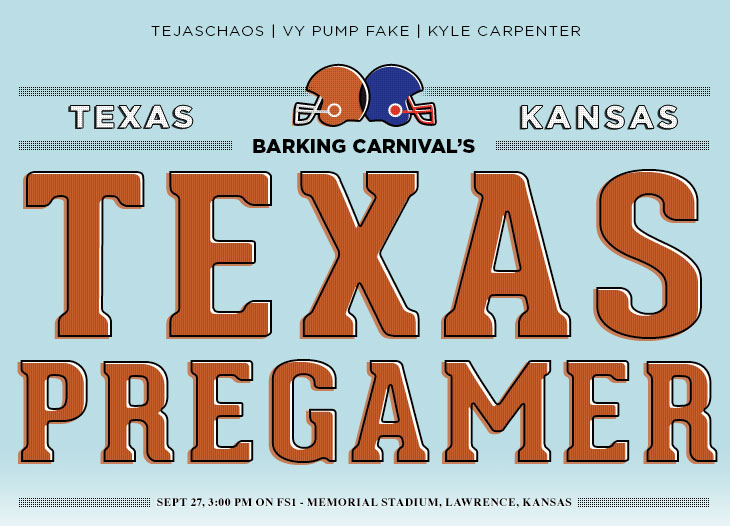 It's a damn good thing we got a bye-week before we take on the mighty Kansas Jayhawks. Even with Cam Ridley, Isiah Taylor, and the rest of the team back, and even after stealing Myles Turner from Kansas (to the dismay of Evan Berkowitz), this will be tough.

KU also returns name-brand talent to fill the void left by Joel Embiid's Twitter account, and still claimed the #3 recruit in the nation to UT's aforementioned #2.

And Bill Self always...

...Oh, Kansas has a FOOTBALL team? An AMERICAN football team? Well it's a damn good thing we got a bye-week before them too, because they must surely be worse than us! And we need to lock up all of the wins we can get. How many teams are left in the Big 12? We're better than at least one of ‘em!

And then we only have to go through the #7 Baylor Bears and #4 Oklahoma Sooners before we get to another delicious matchup with the Iowa State Cyclones. Had that one circled on the calendar all offseason. Wish we had a bye-week then as well, but maybe we can just out coach Paul Rhoades straight up?

Because in case you hadn't noticed folks, we're in the age of moral victories. Moral victories and moral players. Remember how good we felt knowing that we got pretty damn close to a UCLA team that was ranked #13? I can't be sure, but it probably feels better than the immoral players and 10 real victories of say the Robert Joseph, Andre Jones, James Henry, "bitches get kicked" UT-Attitude era.

We have now reached 9 players expelled from the team; a number that even the most optimistic fan no longer envisions Texas matching in wins. But in a time when people are embarrassed to be fans of most teams, collegiate or pro, because of an utter lack of character, decency, or value for human life, it's good to be the good guys.

Let's beat ‘em on the field this week and in life all the other weeks.

Before you pivot to our in-depth Volleyball analysis or our analysis of UT's WORLD CHAMPION Quidditch Team (Suck it Durmstrang), it's time to walk towards the light at the end of the tunnel. Playoff light. 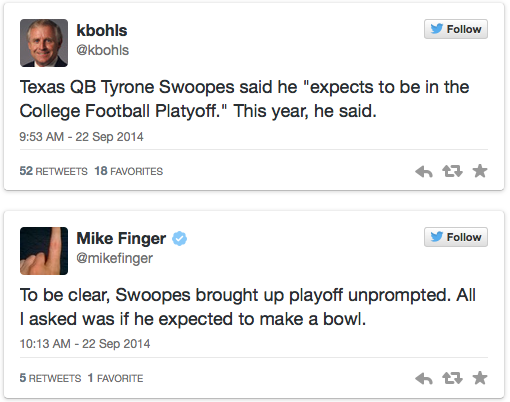 That's right. We have ourselves the first ever PLAYOFF PROMISE not of just the Strong era, but in the history of Longhorn Football. Now, some might think our newly minted starter may not realize that only 4 teams make the college playoff. We have a word for those kind of people. Quitters. I hope the wall along Joe Jamail tunnel is ready - cause there's a Tebow Sized placard in need of building.

Here's a quick step by step breakdown of how the Longhorns roll into January.

Step One - Don't get scored on.

The philosopher John Madden once said "one acquiring an abundance in excess of thy adversary shall reign victorious." It's simple football. They don't score, they don't win. Doesn't matter how many halves you kick off to them (too soon?).

Step Two - Score all the points.

Once we have accomplished step one, we're but a field goal away from victory. We can fix this whole kicking problem right now. What we have is a Nick Rose hair calibration problem. You can't be expected to kick straight when your body has so much more weight on one side. But just like Goku taking off his leg weights, removing some locks will put our kicking over power level 9000. We'll soon have Nicky Money turning all of us into Beleibers.

Fact - we have more money than anybody. It's a travesty we haven't wrapped up this football-oligarchy thing years ago. And with the new playoff system in place, there are even less people to persuade (bribe). They don't even have to pick the teams with the best record! How hard could that be? Just drop VY's sig on a few more pylons at the Co-Op and we'll be good to go. How's that for some schematic advantage, Weis?

But maybe you don't have a friend who owns a rib joint and aren't ready to take control through political intrigue. That's fine too - money talks across the boardroom just as well as it does across the aisle. Forget The Rose Bowl (Presented by Northwestern Mutual). We're renaming it DKR Rose Bowl (Presented by Awesome) and officially changing the south end-zone to Vince Young Park.

Nothing is as unpredictable as college football. There's a lot of season left, and every team is gonna have a few unexpected bumps along the road. We just need everyone else to lose three games before Christmas - an occurrence that's so likely to happen,  we didn't even need to run the numbers. We're that confident. Swoopes confident.

So there you have it. Buzzfeed couldn't have said it any better. Because what's the fun of being Texas if we can be be gro$$ly overconfident in everything always?

Next Time: VY Pumpfake explains how through quantum string theory we have already won an infinite number of 2015 championships.

The entire KU team took their photo in bowties. See Nick Rose? That is expressionism while also considering your teammates. Here's some classy gents you better know:

Every school has its McConaughueuuhgys and Cronkites, well known figures that represent the school for better or for worse in the realm of the public eye. We here at the Pregamer decided to shine some light on Kansas' more well-known alumni. 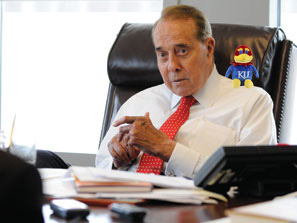 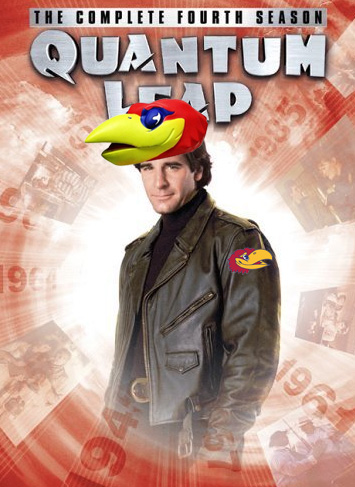 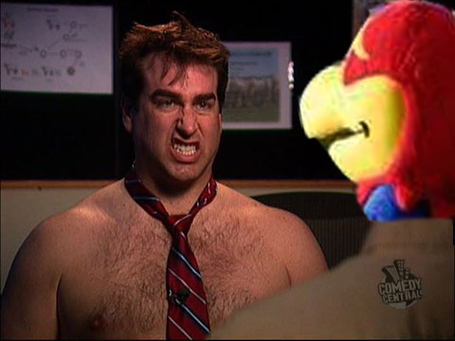 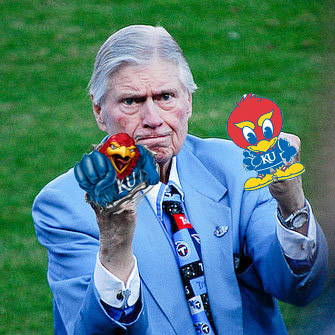 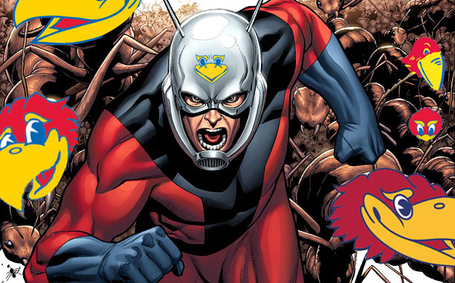 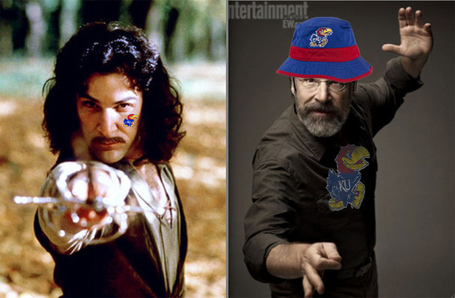 VY Pump Fake: As hard as it is to predict against Mandy Patinkin in a bucket hat... Texas 31-13.

TejasChaos: Charlie Weiss falls asleep in meeting. Strong suspends him for team rule violations. KU actually improves in his absence, but not enough. 24 - 14

Kyle Carpenter: Lawrence, KS is the default starting point for Google Earth. So it is clearly a big deal. And Charlie Weiss is still being paid by Notre Dame, where he last coached 5 years ago...so he must be a big deal. And October is Zombie Preparedness Month in Kansas, which surely seems like a big deal. But a depleted, reeling, fragile team is no big deal. Not when Bill Cosby AND Matthew Mcconaughey stop by in the same week. Texas 38-9. 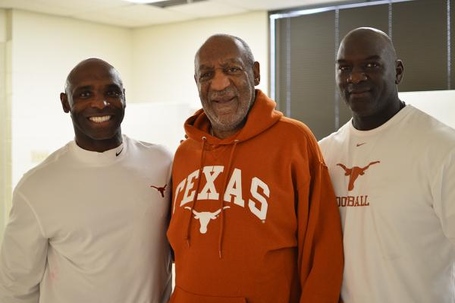 Chuck, The Coz (!), and one obviously photo-shopped Pat Moorer smile. pbs.twimg.com