Take a ride on THE RELEGATOR: Would the English Premier League's system work in college football?

Share All sharing options for: Take a ride on THE RELEGATOR: Would the English Premier League's system work in college football?

Let's acknowledge up front it's highly unlikely that we ever see a relegation system in college football like the English Premier League's top-3-move-up, bottom-3-drop-down format.

But if you caught the waning moments of the EPL season on Sunday (Fox broadcast eight games live), you now know the possibilities are infinitely awesome and it is our job in the off season to indulge each and every fantasy that could potentially improve the game we love dearly from its currently handcuffed (and quite boring) system.

We learned that yes, it is possible to buy a title, even if that guarantee doesn't get delivered until the final two minutes of the season in cluster fluxing fashion. 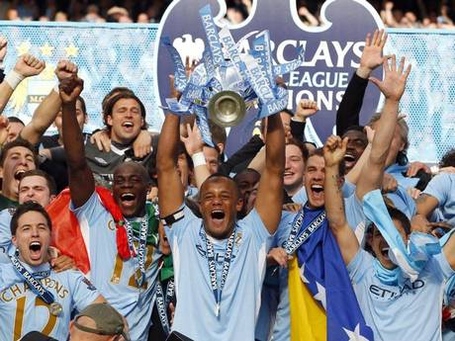 Manchester City scored two goals in stoppage time against Queens Park Rangers to take back the Barclay's Trophy dangled teasingly to crosstown rivals Manchester United just minutes earlier. Wayne Rooney and a sea of United fans glazed over in a stony countenance as the news spread throughout the stadium of City's unlikely -- no, impossible -- comeback. The albatross of collective angst carried by every EPL fan had briefly been lifted for Red Devils supporters, only to tighten like a wet, beer-soaked noose minutes later as they silently contemplated mass suicide. Has anybody seen Sir Alex Ferguson since Sunday?

Living in the UK is great until you have to leave the stadium and your weekly dose of bread & circus is over. There's only one viable sport (sorry, rugby and cricket) and it's more important than the air they breathe. It's not like they can conveniently bounce from college football to NFL to college basketball to NHL/NBA playoffs to college baseball to six months of MLB before it all starts up again, suspending proper mourning for a season gone wrong that ended months ago.

Just ask fans of Bolton, Wolverhampton, and Blackburn; whose teams were relegated back to the Championship division after finishing in the bottom three of the EPL table on Sunday. Don't let the name fool you -- that's like going from the SEC to Conference USA. But the cool thing is you can actually make it back to the EPL if you win that division, whereas the fate of teams in C-USA are currently up to bug-eyed, clipboard-carrying administrators. Remember when the Big East was cool? Yeah. Now the league is fighting for it's life, Hunger Games-style. If FSU leaves the ACC, you're basically left with an elite basketball conference and Clemson. Remember when everybody wrote off the Big 12 after it lost CU, Nebraska, Mizzou, and A&M?

Okay, that was probably a fair reaction at the time. But let's see who joins the conference in the coming years.

In general, the barometer for realignment success is as follows: Any proposed format that inflames Jim Delany's hemorrhoids to inscrutable levels of pain is a Win. Any scenario that puts Belmont in the final against Lehigh probably doesn't work. With regards to this relegation experiment, we want to extract the Every Little Guy Has a Chance! theme from the FA Cup (f Chelsea) with some controlled measures from Champion's League qualifying rules - top four wealthiest teams advance - throw it all in the Vitamix, and sort out the chunks left in this delicious yet healthy sporting smoothie.

Now that anyone including the family pet or live-in geriatric can start a Wordpress blog, radical post-season ideas are easy to promote, even if some have an audience of three and never gain traction. That hasn't stopped Brickhorn from espousing his theories about life to anyone that will listen.

Fortunately some smart folks have already done most of the heavy lifting. And since we are no longer paid by the word, Penthouse Forum-style, we shall gladly link to their work and celebrate its originality.

In short: relegation is the stick to the carrot of promotion between hierarchical leagues. In the English Premier League, you've got 20 spots in the lifeboat. Three of those seats are ejector seats and will be reserved for the three teams caught at the bottom each year. Those three teams will be replaced by three others fit enough to climb into the boat and try their luck in one of the world's most profitable game of musical chairs, and thus reap the carrot end of the bargain: EPL revenues.

This is determined mostly -- but not solely -- by the team's performance on the field. EPL fans will now bore the living daylights out of you by explaining the arcana of soccer politics to you, but the general thrust is this: the system does a lot to protect the big four and little to ensure the upward mobility of teams like the lowly Blackpools and Wolverhamptons of the world. Then you, as an American, can giggle at an Englishman being shocked at a system favoring a hereditary aristocracy and rev off in a donked-up pickup truck while blasting "Proud To Be An American."

If you happen to be a college football fan, you cannot do this too hard, though. This phenomenon already reigns in our fair sport, a tilted playing field of 20 or so aristocrats passing national titles and conference titles around. The last true surprise in the national championship picture came in 1990 when Georgia Tech and Colorado split a title. Since then, the national title and subsequent BCS titles have been shared between 14 teams, and none of them a surprise in the least in terms of money spent on football, talent available or national name recognition.

I like to envision A&M's move to the SEC as one slow, sustained entry into an ejector seat that will go off at some unspecified future date.

So how would this all work exactly?

Geek out on a thousand different variations of this if you like. NAIA schools at the very bottom, making their own deals with D-3 all the way up the chain ... there's no limit to the permutations in this game of CIv 8: College Football Edition. It's boundlessly complex, but embraces the existing power structures of the game except for Jim Delany and of the Big Ten, who is as much a consideration for the future of the sport as North Korea is to the global economy.

One particularly inspired Georgia Bulldogs fan charted this brave new world in the form of conference stacks, where divisions are aligned by region then each power conference is supported by two lesser feeder divisions. 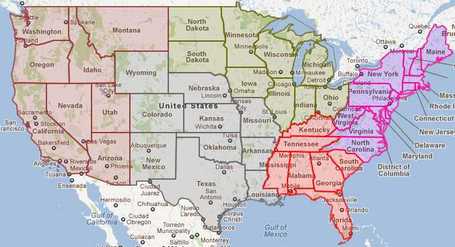 Here's what the new, Neck-stomping Big 12 would look like:

Adios SEC! This league would dominate. But it would also suck to finish in the bottom three and get relegated to the Mountain West. You'd lose money and fan interest pretty quickly. Finish in the bottom three of that leage and your game days are spent watching the Southland Conference. The relegation death spiral happens quickly and like Krohn's Disease there are very few known cures. Only a handful of teams that get relegated in the EPL make it back to the top flight, so there is a huge incentive to remain competitive.

This is why the SEC pays its recruits. QED.

The Financial Times did a study of the divide in earnings between the top four EPL finishers that earn a Champion's League qualifying berth (European club championship tourney) and those that finish 5th or worse. The difference in potential revenue was close to $50 million for teams that advance to the knockout phase of the Champion's League versus teams finish 5-8 in the EPL, who toil in the lesser Europa tournament.

This is also why Nick Saban sent 105 recruiting letters to a 5-star running back prospect ... IN ONE DAY.

If none of this relegation stuff makes any sense, just read this Q&A with Kevin McCauley.

So the only way to move up is to earn it, but there's more than one way to earn things. Is Sheikh Mansour the T. Boone Pickens of soccer?

Sheikh Mansour as T. Boone Pickens is a good comparison, and there seem to be quite a few of these in both sports. Chelsea, Malaga, and Paris Saint-Germain are some other teams that went from being underachievers and/or lovable losers to being rich as hell overnight, just because some billionaire decided to make the team his plaything.

The obvious difference is that T. Boone Pickens is not allowed to go write Gunner Kiel a check for $50 million.

What happens when a big rivalry breaks up? As a Wisconsin man, you'd probably feel strange about losing an annual rivalry with Minnesota when they headed for the MAC. Since that would've happened in 2007, and all.

Losing big rivalries feels very, very odd. This season in Argentina hasn't felt like a real season without the Super Clasico between River Plate and Boca Juniors. I think it probably hits fans sometime near the end of the season, when they realize, "Wow, we didn't play [rival] this year." This is probably how it's going to go for Missouri and Kansas, as well as Texas and Texas A&M. They won't realize how much they miss it until it's December and the game never happened.

This doesn't cause the teams' fans to lose hate for each other, though. Manchester United hasn't played Leeds United in a league match in nearly a decade now, but any Man United fan over the age of 12 still despises Leeds.

Speak for youself, McCauley. A&M can drown in a bubbling bath of adder venom and cyanide. And yes, we will hate Arkansas until the sun turns black.

Let's put this shit to a vote.