Share All sharing options for: Charting The 2011 Texas Longhorns Defense

LonghornScott's recent post about last year's Kansas State game got me thinking about how much the defense improved over the course of the season. Enticing to forecast 2012 based on that, given that last year was Manny's first and that damn near the entire 2-deep is back. Probably dangerous, but good fun.

Here is a quick take that is simple yet I think pretty solid. I use yards per play relative to the offensive team's season average. This is a whole lot better than raw stats, but not as good as more carefully normed data or some fancier stat. But simple to understand and probably >75% of what any other single number will do for you. Using this stat, last year's top defenses were: Alabama (-2.06), FSU (-1.37), South Carolina (-1.31), Texas (-1.25) and LSU (-1.20). Feel pretty good about that top 5, and even the separation between Bama and the others, which I've seen in much fancier stats.

So here are/were your Horns: 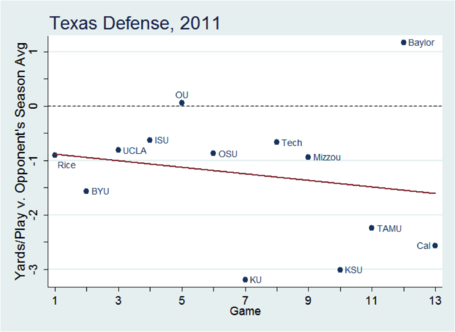