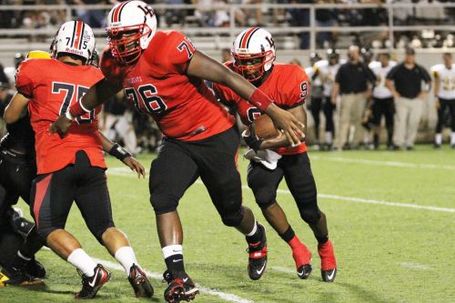 There are three kinds of OL you can recruit:

In the past, Texas has gravitated towards the last two types of player, leaving Texas with a unit whose best days consist of getting blown off the ball in the correct direction, leaving their crumpled remains in between the defender and the football:

That highlight tape should be auto-starting at 7:38. If it doesn’t, go there and watch what the current best-case scenario is for Espinosa.

Enter Stacy Searels, whose SEC upbringing has led to taking giant, high-upside athletes rather than over-achieving 230 pound products of endless summer camps and private coaching sessions. To put it simply, our recruits look different now, in size, speed and attitude.

To Mac McWhorter’s credit, he did bring in the likes of Jamarcus Webb, Aundre Mcgaskey, and Roy Watts - all athletic big men. Maybe their failures tainted McWhorter’s process, I don’t know, but we’ve never seen Texas draw back-to-back classes quite like this, even in more optimistic times.

To start, I want to throw in my two cents on something – this class is not better than last year’s. Kennedy Estelle is what Ricky Seals-Jones would look like with three more inches and 70 more pounds, and if you asked an NFL line coach to put together a prototype tackle, he’d build Camrhon Hughes. This class does not have anything approaching either of those guys. And Curtis Riser is a better version of the headliners of this post. I’d rather have any of those three than anybody Texas has so far this year, even Raulerson. Toss in a physically ready JUCO LT, and the class of 2012 wins in a landslide.

For 2013, I lump Kent Perkins and Darius James together because they, like most Giant Bowling Balls, are essentially the same player at this point. Neither is overwhelmingly skilled just yet, like 99.99% of all linemen in high school (although James does use his hands pretty well). Kent Perkins pass sets like he shit his pants and is trying to hide it from everyone in front of him. Neither guy is a blocker so much as a pusher.

But that stuff doesn’t really matter. It’s easy for a coach to fall in love with whoever is playing LT at Lake Travis right now, letting the college-level skill set override that fact that he’ll be the exact same player in 3-4 years. Recruiting is about finding the best juniors, not freshmen. Both players are thick in the right places, quick off the ball, and call pull and run well enough for any scheme. I’d be surprised if James ended up at center, but the fact that he has experience there is a plus any way you slice it.

The most important aspect is size and athleticism. You shouldn’t need anybody to tell you that. But the second bit that is almost just as important is the player’s demeanor. It’s not about how hard he hits, but how hard to wants to hit. Pulling is a graceful act that should end violently, like a scene from American Psycho. I want to see if a player lowers his shoulders and tries to deliver a blow, rather than push the force defender out of the way. I want to see if a 17 year old LB will try to break the ball carrier in half. I want to see a WR go get a ball, rather than wait for it to come to him. I want to see QBs make decisions within the scheme and get the ball out, not scramble around and launch a jump ball. It’s not about refined mechanics so much as it is about the instinct to use technique at all. Technique can be improved, but mentality is hard to change.

So at this stage, what can we see from either player? For starters, I’d put both players at guard, with the option of cross training them at tackle. James uses his hands, and Perkins already has experience there, with the long arms and frame to match. But I don’t like Perkins on the edge at this point because he reacts to pass rushers, however he does have the ability to play tackle one day.

Ideally, you drop to a spot and give the DE a choice – either you try to go around me or we fight right here. You start jumping out at speed moves and you’ll give up a lot of quick pressure to the inside. Even on his highlight tape, Perkins is jumpy and submissive in pass pro. Run blocking is really where he excels, coming off the ball hard and low, back flat and feet pumping. He’s ideally built to block down, an important aspect of our power offense, at all five OL spots. He can run well enough to pull as well, but he’ll need to learn to apply that same pad level for when he has a running start.

Texas is a power/inside zone team, which requires a lot of the skill set Perkins has. He’s got the length and athleticism to play tackle, as well, with the requisite disclaimer that he’ll need to improve his footwork blah blah blah. At a bare minimum, assuming he isn’t a mental midget in any number of ways, you're looking at a solid guard who fits the scheme. At best, we’re talking about a future first day pick at RT.

James is more interesting to me, for no other reason than he’s a 6’6 center. I really wonder how he ended up there. Was he the only 14 year old that could snap? Is he smart? Does he make the line calls? Is he bad on the edge in pass pro? The team’s best lineman prospect is almost never a center, especially if he’s over 6’2 or so. It’s like seeing an albino penguin or something.

The first thing that jumps out to me is how well he can dig out players playing over him. A guy his size shouldn’t be able to get under nose tackles, even in high school. Sure, he’ll stand straight up once he’s done with them, but the ability to move a 1-tech by yourself is invaluable. If he can do that to whatever roided-up, V12 motor-powered DT is playing for Oklahoma in 2015, Texas has themselves a winner.

The next best thing about James isn’t on offense at all. He makes a cameo on defense toward the end of his highlights, and someone please tell me that he doesn’t look like a young Kheeston Randall. Maybe A’Shawn Robinson isn’t the best big athlete Texas grabbed this spring.

Either way, James is a big kid who can move, and at the very least understands leverage. He’s dynamite at the point of attack, and is a ways away on everything else. Centers aren’t typically judged on pass protection, so no idea what kind of player he could be at tackle. You’re probably looking at a guard who may get a look on defense, who, like Perkins, is a brick wall with a motor who needs light seasoning.

Texas’ OL prospects are going from cheap meat that needs to be covered in BBQ sauce to be edible to grass fed rib-eye that only needs a bit of salt and pepper. These aren’t classes of beef, they are classes of filet mignon.