Share All sharing options for: WatchESPN Now Available on Comcast and Yes It Does Matter To the LHN 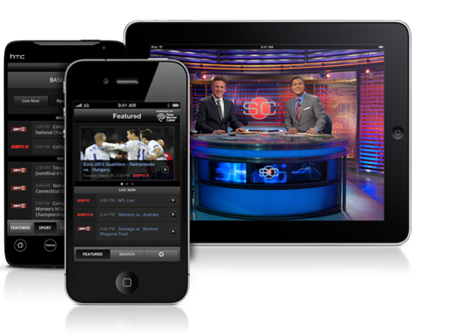 It's a free download at the iTunes Store. Access on Android devices will be available in the coming months.

WatchESPN is being offered as a perk to cable subscribers. Both ESPN and the cable providers see content on the iPhone, iPod touch, iPad or XBOX giving subscribers the ability to have "TV Everywhere," and act as incentive to not cut the cord of cable TV.

ESPN also understands that mobile access is a key to sustaining such efforts as the Longhorn Network, and its why they are willing to fight so hard and so long over the subscription price of the LHN with cable providers.

Comcast is the largest provider in the U.S. and their 22 million video subscribers means that WatchESPN is now available to over 40 million potential customers. WatchESPN offers live feeds of ESPN, ESPN2, ESPN3 and ESPNU. It also offers access to feeds of ESPN Goal Line when college football is underway or ESPN Buzzer Beater during college basketball season. It is expected that regional networks, such as the LHN will also be a part of WatchESPN.

Customers of Time Warner Cable Inc already have access to WatchESPN and that is a major negotiating point over distribution of the LHN. Every athletic venue on the UT campus is wired for live streaming, and having mobile access to any event on the LHN is part of what ESPN is selling. It's part of the reason they are adamant about getting 40 cents per subscriber in the dominant Big 12 markets.

ESPN's mantra is "Everything is available - for a price." Projects like the LHN are part of ESPN's search for future revenue streams, and if more and more people are going to leave cable, they want to be an alternative that the customer is already used to paying for. For now, the online and mobile versions come with few or no ads as ESPN experiments with interactive advertising.

This is all part of a 10-year deal between Comcast Corp. and The Walt Disney Co. that was announced in January One of the reasons cable providers are reluctant to pay what ESPN wants is they see more such networks coming online. The Disney Channel, DisneyXD and Disney Junior will debut to Comcast's Xfinity TV subscribers later this year.

Cable providers are worried about a never ending circle of price hikes. They love the idea of having their content available on mobile devices as an incentive to keep service, but they are fighting to keep the prices for these individual channels as low as possible so the cable bills doesn't skyrocket.

As much as it pains Longhorn fans, as well as Bellmont Hall, the Longhorn Network is just a small part of a larger battle that ESPN is willing to wage for a long time.