The Longhorn leaper broke the conference championship record this weekend on his first jump with a 26'10.5".

Goodwin is the only athlete in Big 12 history to win the indoor and outdoor long jump for two years running, but he has bigger fish and chips to fry in late summer and this Fall.

Qualifiers for the Olympic team begin June 21st in Eugene, OR for the right to compete for Team USA in London and Goodwin should do just that after a solid Spring track season. The games conclude August 12 and that gives Goodwin a little time to prepare for football if he can avoid English cooking and other distractions. 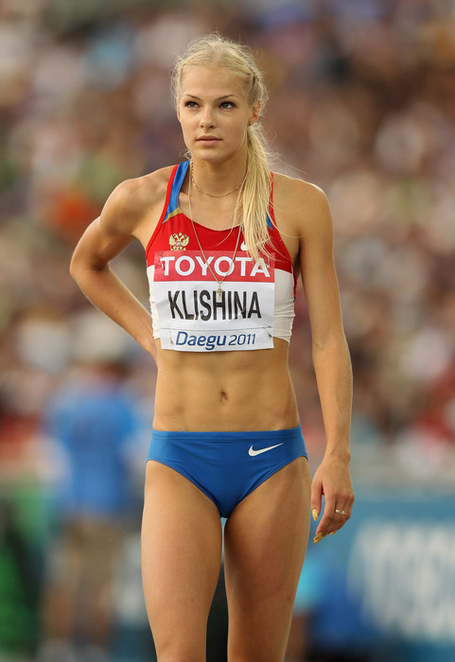 So how to best use our track phenom for Team Longhorn after he does his work for Team USA?

Although his track training means he'll show up with more fast twitch than anyone on the field, he won't have off season reps catching balls, running routes, getting off of press coverage, building timing and trust with David Ash, and working on lateral acceleration and agility.

Marquise is a fascinating player because he embodies few of the stereotypes around track athletes playing football while some of his more subtle deficiencies prove that dominance at the receiver position has more to do with dexterity, stop-start speed, small space athleticism, flexibility, and body control than track dominance.

Let's talk about those attributes and how they feed into his best use in 2012.

Goodwin has never been a "track guy" with respect to toughness. Great attitude, consistently willing to mix it up.

Goodwin also carried the ball 22 times for 220 yards in 2011, and never shied from contact.

Also contrary to the track stereotype, Marquise has consistently shown good hands, first glimpsed against OU in 2009. He never uses his body to cradle, and reliably makes the easy catch while reeling in several tough balls every year.

Once Goodwin squares his shoulders and gets two full strides, it's over. He has enough juice on the move to turn end arounds into positive gains with sheer foot speed. But he literally and metaphorically doesn't "hit his stride" until he's in ideal running form. Marquise is the anti-LaMichael James.

Goodwin has trouble getting the power in his engine to his wheels in a way that favors football geometry. He frequently rounds angles that quicker (but slower) athletes eat up. Is it stiffness? Stride length?

He actually moved more fluidly as the season progressed, as evidenced by his play against Baylor, A&M, and Cal, but you need only look at some of his kickoff return work to see that straight lines are his friend.

As he showed against the Baylor Bears, he can be deadly when hit on the run. But he's not been consistent getting clean releases going against the other team's best corners. So finding scenarios with "off" coverage is a good thing for Marquise.

I can think of a half dozen instances off of the top of my head in Goodwin's career where a corner steered him out of bounds deep, resulting in Goodwin making a spectacular catch...next to a sideline reporter. Part of it is Goodwin's inability to gain initial separation upstairs with a clean release so that his lower body can do its work, but that's compounded by a tendency to line up a little too wide and drift. The QB's throw to his outside shoulder combined with a corner trained to put him into the water coolers puts Goodwin outside of the boundary and rendered useless, or best case, catching a jump ball for 30 instead of a in-stride pass for 75 and a touchdown. He'd have another 350 yards receiving over his career if boundaries honored the rules of horseshoes and grenades.

His 5-9, 178 pound frame wouldn't be an issue if he was more border collie than greyhound, but it prevents him from muscling through where technique lacks.

Despite great speed, good hands, and a football mentality, the sum total of his statistical career at Texas (94 catches, 1024 yards, 4 TDs, 10.9 yards per catch) reads "possession WR" but his work running the ball (33 carries, 265 yards, 8 yards per carry) and his play in several big games at Texas demonstrates what he's capable of when he can get a step. There's no question that Harsin wants Marquise to break out in 2012, particularly given our potential running game and his desire to turn Ash into a low attempt/high result QB, but how best to do it?

Goodwin's best employment is as WR #3 rather than #1 or #2. Injury and unreliability from Davis miscast Goodwin as our primary down the stretch. If Shipley/Davis can do their jobs and draw coverage, Goodwin has the opportunity to be a significant big play asset. Goodwin will see either safety or nickel coverage, players usually lacking the skill set to nullify him. And if it's a LB, he'd better be Derrick Brooks.

Goodwin's ideal use is what we saw against Cal - a few touches for big results enabled by play calling. Not as a chain moving possession receiver.

The long touchdown catch shows what happens when Goodwin doesn't get checked properly off of his release (and Goodwin gives himself enough space to operate).

Defensive coordinators, more than anything, fear the single play long score and will game plan in inordinate overcompensation to prevent it. If Goodwin can put the fear of God in DCs over their secondary and tertiary match-ups, that means breathing room for others to operate, easier fronts for the running game, and more safeties watching the game unfold instead of affecting it.

Most of all, it doesn't require him to be a complete receiver.

Just a dangerous one.