My blood pressure was a little high in Q1 and it had little to do with the Longhorn offense. So there's the proof of offensive growth. Equally refreshing to see the Texas offense close out the game with a 91 yard drive (spurred by Bergeron's 54 yard run) after Wyoming cut the lead to 14. I haven't had a chance to do a re-watch with the help of rewind button, but here are my incomplete thoughts on a solid, if imperfect, 37-17 Texas win.

Texas controlled the game with a solid running game and a possession passing game. The Horns were 60/40 run-pass and that's a ratio I expect to hold, particularly if a decent percentage of the passing game is going to be screens and flips to our backs. 75 plays, 436 yards, 5.8 yards per play is OK given the opponent, and though we're far from being a very good offense, we're well beyond what we were last year.

The running game thrived when we introduced some movement and line pulls early (coincided with insertion of Brown) and our power game came on later when the Cowboys wore down (see Bergeron's big 2nd half). We're incapable of imposing our will in the running game running power or base blocking - we just don't have that kind of OL or complementary personnel. The passing game had positives, centered mostly around David Ash, Jaxon Shipley, and the OL protection, but it's a work in progress.

I remember you, Holiday Bowl David Ash. And already forgetting you, Missouri David Ash. It's clear that the offseason and a full camp did wonders for his confidence, understanding of the offense, and decision-making. Amazing! Freshmen can improve! Ash was an efficient if unspectacular 20 of 27 for 156, 1 TD, 0 Ints and his fumbled snap turnover was of the "stuff happens" variety. Ash's receivers had two or three drops (we can debate the throw to Brown - I say catch that), but David showed consistent poise in the pocket, even when our receivers were blanketed downfield. On short throws, he did a nice job of hitting the upfield shoulder where the receiver could do something with it, and his other incompletions were largely throwaways when nothing developed.

We didn't use Ash much as a constraint in our running game, by design against a lesser opponent. He'll have a role there.

From a developmental perspective, Ash was unable to connect deep on two deep balls and though neither of his throws were egregious (and one resulted in a 15 yard pass interference) they did demonstrate a lack of anticipation. He has to trust the call and his read of the coverage, let it go in rhythm, and put some air under the ball.

Watching some fans, a significant portion of the media (pre-game articles: CAN THIS TWO QB SYSTEM WORK?!?!), and announcers attempt to puzzle through why McCoy didn't go in for "the rotation" was a pretty amusing exercise to say the least. Jesus Christ. Reading the tea leaves like Ray Charles....

Bergeron (15-110-2tds) and Brown (14-105-1) certainly demonstrated how a true rotation is supposed to look. Bergeron got the early run in our power game, and averaged a weak two yards a pop on his first 7 carries. Brown tagged in off of the top rope as we started to pull some linemen, introduce movement, and get some angles, and Texas began to thrive, ripping off long runs. Brown continues to demonstrate great vision and feet and he's physically better as well. Bergeron did a nice job on goal line, in the Wild Short direct snap, and then really came on in the second half as Wyoming's front wore down. His 54 yard run, which included a stiff arming of a LB and a full on trucking of a Wyoming DB, was a nice reminder of why patience pays off with Mr Bergeron. 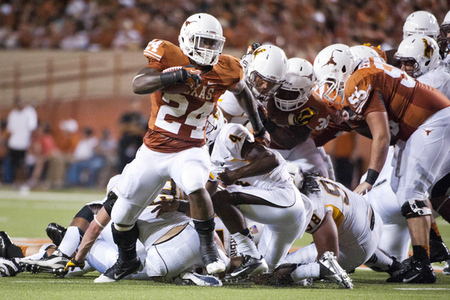 DJ Monroe was a pleasant surprise, with 6 touches for 51 yards in the jet sweep and short passing game, including a great goal line scoring effort. DJ is playing a like a man whose job is being threatened. Because it is. Too bad no one can threaten Magic Mike Davis.

I wish I could have gotten more looks at Ryan Roberson's reps at FB, but the few I saw weren't covered in glory. It's possible he looked like Tom Rathman on other plays.

Gray got some run late and his 5 carry, 9 yard stat line will see brighter days soon. Like next week against New Mexico.

Before the year, I offered that we probably had the 6th best unit of wide outs in the league. I'll stick to that. Jaxon Shipley (7-45 receiving, 1-18 rushing, 0-1 passing) ruined his passer rating, but he demonstrated why he's our clear #1, even if constrained by defensive attention and a lack of opportunities downfield. His two best plays: the 18 yard salvage job on a trick play gone bad, and then a brilliant head fake sale on a flag...oops it's a post touchdown catch.

The new Mike Davis reminds me a lot of the old Mike Davis. Dropped ball? Check. Jukes and dodges instead of maximizing a simple flip out for an extra two yards? Check. Pacifist when the ball isn't perfect? Check. Jogs decoy routes? Check. Blocks mostly when the feeling seizes him? Check. Maybe I'm being too hard on him, but when I isolated on him, I wasn't happy. He's an unfavorite.

Our RBs caught 5 of Ash's 20 completions, the TE's grabbed 1 pass (DJ Grant), Goodwin wasn't much involved in the game plan, Bryant Jackson got some run, and we burned shirts on Cayleb Jones and Kendall Sanders. It's clear to me that we'd like to get Jones and Sanders up to speed ASAP.

Greg Daniels got a ton of snaps and I thought he was solid in his first collegiate game at the position. I really didn't isolate on him for more than a half dozen snaps. See Roberson disclaimer.

Pass protection was sound (0 sacks, 2 pressures at most) and if you're offering "well, it's Wyoming" we didn't pass protect that well against Wyoming level teams last year. Last year's OL was also a comedy of mental errors and I saw very few straight up busts. Additionally, this group has above average athleticism and when Texas introduced some movement, pulls, a little blocking diversity, and some angles, these guys did a really nice job. 47-280-4 TDs at 6.0 yards per carry with two backs going over 100 and David Ash clean is a report card Mom will usually stick on the refrigerator.

From a developmental perspective, our weakness at moving the line of scrimmage straight up was apparent. We can't just line up and impose our will on people. If you're a BC reader, you already knew that though, right?

Individually, I watched Dominic Espinosa quite a bit. He struggled at the point of attack a couple of times, particularly when big Mike Purcell was still feeling frisky in the first quarter (his friskiness eroded considerably over time). Espinosa did a good job pulling on several plays where Malcolm Brown had big runs and he's consistently sound at slipping to the 2nd level. He's shored up at the point of attack, but it's still a legit concern.

I wish I could offer more on the other OL player by player, but absent a re-watch and a rewind button, I'm not comfortable making pronouncements.

We're better on offense. At QB, on the OL, at RB. WR/TE is a problem. We need to develop youngsters, motivate oldsters, or give a walk-on Captain America's super serum if we're going to move this offense from adequate to good.

New Mexico is a terrible team. If we want to audition some youngsters at WR, inject Ash with greater confidence, or make a benching statement with an underperforming veteran, the Lobos are the time to do it.