The preseason hype of our defense dissipated in a 1st Quarter that reminded us of the larger costs of inexperienced players adjusting coverages against a complex offense, a lack of live tackling in practice, and general miscommunication. After that, the Longhorn defense dialed in before allowing another score in early Q4 (abetted by a questionable personal foul call on Demarco Cobbs), and the Horns defense finished the season opener with a mixed, potentially useful, report card.

But I want to start with special teams, because no one ever does, and because that unit demonstrated its potential to make or break a successful season.

True freshman Nick Jordan struggled to convert his field goal opportunities, going 1 of 3 with misses from 44 and 46. The Horns had a terrible snap on one kick and didn't block or kick well (Jordan's trajectory was about nutsack high) on the other one. The support issues are all correctable and I expect Anthony Fera to provide stability once he's healthy. If not, we're in for some adventures.

Kickoff and punting coverage was outstanding. The 2011/2012 recruiting classes are brimming with speed and attitude and have really upgraded us there. Although the hits laid down by Dalton Santos, Josh Turner, and Sheroid Evans inside the opponent 20 yard line merit well-deserved praise, I have to give major props to Nick Rose. He's putting a ton of air under those kicks, placing them perfectly, and placing the kick returner right at the goal line, essentially forcing him to take it out at a major disadvantage or kneel. Wyoming started the game inside their own 20 four times and when they didn't, it was a touchback. Flawless.

If we can get Fera up and running and address some basic kicking mechanics, this unit is a potential team strength.

Held Wyoming to 1 of 11 on 3rd downs, held down their running game (except their first run of the game) and Smith's feet, and gave our offense solid field position. But we violated Diaz's cardinal rule by allowing long plays in the passing game.

1. Communication. Guys weren't doing it effectively when Wyoming went empty or combined motion with unbalanced lines, but more crucially, there wasn't one DB or LB who took charge and got everyone on the same page. Gideon and Acho each played that role over the last 2-3 years. It's one thing to know what to do, it's another thing to physically grab another player and put him where he should be.

2. Tackling. I mentioned in the Wednesday intel report that the coaches had some disagreement about the amount of thud tempo over true tackling in August practices. Needless to say, the missed tackles that hurt us were guys "thudding" instead of tackling.

3. Lack of Poise. When a defender is confused pre-snap, he tends to lose his mind in all aspects of the game. A few notable instances: Thompson's PI, corners playing off coverage paired with a blitz call, our tackling, and some pointless behaviors in zone coverage.

The good news is that all of these things are correctable, but the coaching staff has to address them and some of the younger players have to realize that their 40 time and ball skills are useless if they can't line up right. 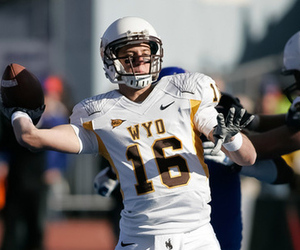 Brett Smith is also as good as I thought he was. He elevated his team almost singlehandedly.

We had little opportunity for sacks given Wyoming's tempo and Smith's footwork. Wyoming's schemes make DTs nearly irrelevant, but we did learn some stuff. Brandon Moore had a couple of TFL and was hard to block on some snaps (he should have drawn at least two holding calls) but he resorted to his stand-up straight mummy dance and got subbed by Desmond Jackson. When he gets a little tired, all of his techniques fall apart. I wasn't surprised to see that change reflected in the depth chart today. Chris Whaley played pretty well against a good center and had a blocked extra point to go along with a TFL and a hit on Smith. Nice job in pursuit and adjusted to Wyoming's cutback misdirection over time.

Okafor and Jeffcoat played great games. They combined for 14 tackles, Okafor had our only sack, and they had 5 QB hits. Great pursuit (Okafor made a sideline tackle 30 yards from his position), nice diagnosis of what Wyoming was trying to do schematically, and they were always a step away from forcing a big play. Our backup DEs did some good things, but they also made a couple of errors that contributed to Wyoming's 2nd half score that cut the lead to 31-17.

Some good and some expected bad. Still bullish on their long term prospects, particularly as we face more conventional offenses. A definite lack of communication at times, particularly when Wyoming motioned and misdirected in the running game, but I thought Edmond got considerably better as the game wore on (and finished with 8 tackles). Hicks made some excellent plays (8 tackles, 1 tfl) - most spectacularly his diagnosis and break up of a screen pass, but he needs to learn to be still in zone coverage. He created passing windows for Smith with pointless nervous activity instead of settling, reading, reacting. Demarco Cobbs flashed great speed on the unbalanced blitzes, but I'm curious to see if he's capable of more traditional LBing skills beyond "guy who is really good in space." His best tackle was probably on Kenny Vaccaro.

We all expected some growing pains and they'll see no offense better designed to freeze a young LB into indecision than Wyoming. Onward and upward.

Some busted coverages, lack of concentration, poor tackling, and more miscommunication in combination with some great hits and two great interceptions (Byndom's was nice, but the range that Vaccaro showed negating two verticals and baiting a QB from fifteen yards out just moved him up 10 spots on a NFL GM's board). Dissecting the long TD pass isn't really needed, we know what indecision and poor tackling looks like. However, I'm more irritated that if you eliminate that play, Smith was still 15 of 27 for 194 and hit a number of intermediate throws. A lot of that is credit to him, but our pass defense left a lot to be desired and the incongruence in coverage calls with our blitz packages cost us an extra half dozen sacks and/or big plays.

When Diaz's defensive rules meets inexperienced players at decision-making positions going against an offense designed to promote indecision and introduce doubt, the resulting learning experience exposes a lot of hidden vulnerabilities. This is good thing. Better to get them out now than find out when it's 31-7 West Virginia in the middle of the 2nd quarter. Granted, if 17 points and 345 yards constitute "bad" our standards are in a good place, but the defense got a wake up call, particularly in how to start off a football game. Let's see how they respond.