Share All sharing options for: Oscar Pistorius: The Blade Runner

Oscar Pistorius is the fastest man with no legs in the world. And when he ran a 45.07 in the 400 meters on July 19, 2011 - a time sufficient for an A level Olympic qualification, runners with biological legs began to get increasingly nervous about what the inclusion of carbon-fiber limbed runners meant for the future of their sport.

The controversy around Pistorius, and what it means to our definitions of competition, is fascinating, because it plumbs into the depth of the Olympic ideal and what the games ultimately stand for: is the brotherhood of Man through sport better expressed in generous inclusiveness or in adherence to the strict purity of competition? Is Pistorius an irresistible marketing opportunity for shoe and apparel companies - who can exert considerable political pressure on Olympic officials - a simple product of bio-mechanical engineering? Or is he legitimate inspiration for a disabled community that struggles with indignities most of us can't imagine?

The edge of the bell curve in human variability is the undeniable truth of modern athletics. We draw lines about what is and what isn't acceptable in pushing those margins, but they can seem arbitrary, almost capricious. For example:

Strict principles rarely wins out here. Some things just feel wrong. And we have difficulty articulating exactly why.

With respect to Pistorius, is his use of carbon-fiber appendages a proven advantage? And, if so, is it comparable to laser-eye surgery - something that we've decided abets athletic performance, but is an allowable "correction" - or is it merely a Trojan horse for driving us into strange realms of sports performance (biomechanical implants, genetic manipulation, purposeful amputation at birth) that we'd rather avoid. At a certain level, we're attempting to define normal. And that standard is based on a body configuration that most of us wouldn't feel very comfortable asserting to a disabled veteran.

The evidence is reasonably clear that his use of carbon-fiber limbs, in combination with early adoption of their use when his legs were amputated at 11 months, has significantly enhanced Oscar's performance.

Without getting too deeply into the controversy over the testing methodology in Germany and Texas and the pro-Pistorius camp's use of selective comparator groups (marathon runners vs. sprinters) and lack of full disclosure when a group of the original researchers broke camp on their results (you can read a very thorough examination of that issue here), the gist of the anti-Pistorius camp is this:

His Cheetah blades weigh about half of what a normal human leg weighs, they do not tire like flesh and blood, and they allow him a higher turnover rate. The upshot of it all is this fairly alarming assessment:

In this sense, the level of sprinting athleticism required for Mr. Pistorius to achieve world class speeds is dramatically reduced compared to his intact limb competitors. Mr. Pistorius attains world-class sprinting speeds with the ground forces and foot-ground contact times of a slow and relatively uncompetitive runner. Mr. Pistorius’ intact-limb competitors, with natural limb weights and swing times, lack this option, and therefore must achieve their speeds via exclusively biological means. Mr. Pistorius, in contrast, achieves these speeds through the use of technology

It's not that Pistorius is shaving a possible 1/10 of a second off of his time - some researchers have hypothesized that we may be talking about up to 12 seconds. 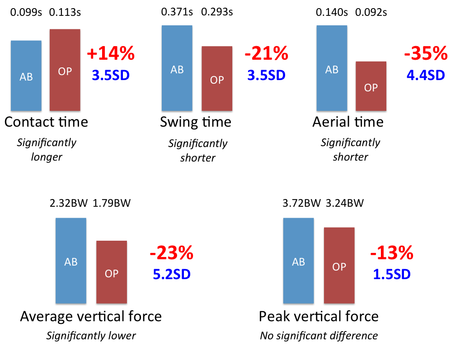 I think that sort of dramatic estimate is reckless as it purports to know what OP's potential with legs is as opposed to the economical running style he's adopted using carbon fiber, but the broader point remains: Oscar Pistorius is as much a triumph of human technology as the human will.

If he is allowed to compete with less-abled (irony alert) athletes, what does it open the gates for?

After examining the evidence, my inner spoilsport wins out. Pistorius should not be able to compete. The science is pretty clear and it wins out over my natural sympathies.

But then I struggle with this pesky idea, the natural, logical extension of my tendency towards rationalism: the highest level of human achievement is about pushing boundaries. What is this but that?

Just as the nerd world pines for technological singularity, perhaps physical culture should embrace its own event horizon. Perhaps Pistorius heralds a new world of physical achievement that we'd be better off embracing than holding on to quaint notions of human potential.

Where do you stand? 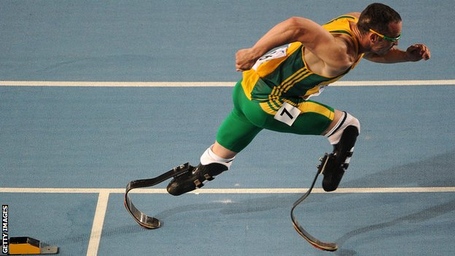