Scipio told you he would. 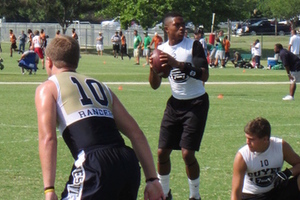 Though I'll be counseling caution and adopting a wait-and-see attitude for 90% of our 2014 commitments, I'm unreasonable about Jerrod Heard. Heard is going to be the Longhorn's 2014 QB commit. And I want to give you some idea of what that means.

Jerrod Heard is the truth. At least some junior year version. Or, if not, a smudging of facts I can live with. He looks to be the rarest of QB prospects: the high floor, high ceiling combo. It's madness to suggest that about a player with two high school seasons left, much less a QB, but there are elements to Heard's game so intriguing, so impressive for his age, it's hard not to put it out there.