Eli Manning famously didn't have it. He didn't have his older brother's perfectionist assertiveness, his dopey demeanor suggested passivity, and former teammates talked about players openly laughing at him when he tried to give motivational speeches. It's not just that he wasn't a leader - he was held as a model for how a clear lack of leadership undermines team performance; Eli Manning: locker room laughingstock, media punching bag.

Then Manning won a Super Bowl over the Patriots on the heels of a miracle turnaround season and, though that win was fueled by the Giants defense and a miracle catch, the narrative began to shift. His passivity was actually coolness under fire. His reticence the stuff of Marlboro Men. He just "had something." After he led the Giants to their second Super Bowl win, this was all confirmed. Not only was he now deemed a good QB, he was "elite", a "proven winner" - my favorite tautology in sport. And a really good leader after all!

The thing that changed was Eli's level of play. And the confidence that it inspired in his teammates and himself. But not his core personality. Not his gritty intangibles. Not moxie. As his level of play elevated, media, teammates, and fans suddenly discovered hidden depths of leadership previously undiscovered and unknown.

Leadership isn't a personality type, it's a capacity. A reservoir of teammate confidence.

If you prefer a college example - Colt McCoy. Remember the 2007 Colt is a nice-kid-that-lacks-killer-instinct meme? The anti-Vince. An amazing junior year confirmed what we'd known all along: nice guys finish first. We saw it all along, buddy! You'll find a similar pattern in most every UT QB of note.

Which brings us to present day. Is Case McCoy a better leader than David Ash? He's demonstrative and vocal, where Ash is reflective and quiet. Is Jalen Overstreet the only true leader on the depth chart because of his charisma and toughness? What about the coachable Connor Brewer?

David Ash said something pretty perceptive on QB leadership yesterday which cut through all of the bullshit fairly cleanly.

People say leadership is a lot of different things, but when it comes down to it, it is a really abstract term that has a different meaning to everyone. I think guys want to follow the guy who is going to put them in the endzone. That is my goal.

If Case McCoy is enthusiastic and offers rousing speeches on his way to throwing five pick 6s, his teammates will regard him as a blowhard, not a leader. But if he rallies us in a close game, even David Tyree style, he's a natural leader, his fiery demeanor drawing the best from his teammates.

Leadership does exist in and of itself as a natural quality and my intent is not to suggest otherwise, but QBs who keep taking their teams into the end zone tend to find themselves imbued with tremendous leadership attributes. After the fact. And their dominant personality trait is generally offered as the reason for their deficit or abundance of leadership. That's the stuff of horoscopes, not analysis. Leadership is nothing more mystical than the confidence you inspire in your teammates. And that confidence usually stems from your play on the field.

I think guys want to follow the guy who is going to put them in the end zone. 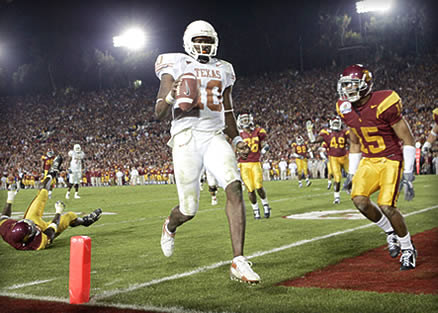