Weep for DGB if you're the kind of person that can still find molecules of empty in a very full glass, but this class is pretty damn sweet.

While DGB raised Missouri's class all the way into the Top 50 nationally!!!! (rejection fosters boorish condescension in Texas fans), Texas was collecting talent like Scott Baio on a Baywatch set.

...except that this team already has a few Jimmy Chitwood's on it.

I'll be breaking down every kid in the class over the next few days, but from a macro perspective: there was a recruiting sea change in Austin. Or at least a pond change.

Texas took 28 guys, flipped 8 commitments from rival schools, didn't rest lazily on early evaluations, took risks on some kids with a little edge, actually went after some kids who might say no, recruited aggressively until the closing bell - grabbing four guys in the final week and one surprise on signing day (I rate Dalton Santos and Torshiro Davis as two of the Top 10 guys in this Longhorn class; if any of you compare Santos to Tyson King/Reed Boyd/Kyle Richardson/Scott Derry I'm going to trace your ISP, come to your house, and beat you with a weathered copy of The Secret), signed two JUCOS, and landed four out-of-state kids at specific positions of need.

In short, almost every single thing knowledgeable Longhorn observers have been clamoring for on the recruiting trail happened. Did we take a couple of guys that might raise an eyebrow or elicit a mild shoulder shrug? Sure. But we didn't take 10 of 'em. And now we have a nice complement to a very strong 2011 class.

The consensus among all services is that Texas landed a Top 3 class and that's nice, but more crucially the film and physical measurables show me a class where I don't see athlete drop off until the 20s. That wasn't the case in some other highly rated classes, where the drop off in quality happened inside the Top 10, but national guru types still rated us highly out of peer pressure, laziness, and catered expectations.

Not so here. In fact, in addition to 17 of our 28 signees having four or five stars, I already see a couple of three stars in this class with future elite potential. 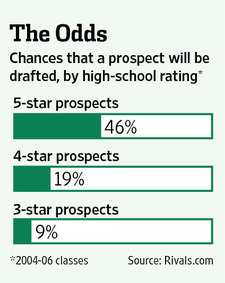