Darrell Royal to Lead A Team One More Time

Share All sharing options for: Darrell Royal to Lead A Team One More Time

This time he is helping to create a research initiative to help find a treatment for Alzheimer’s -- a disease he battles daily with the help of family and friends.

Coach Royal appeared Tuesday before a state legislative committee with Edith, his bride of 68 years. Also on hand as a show of support were Lance Armstrong and Matthew McConaughey. 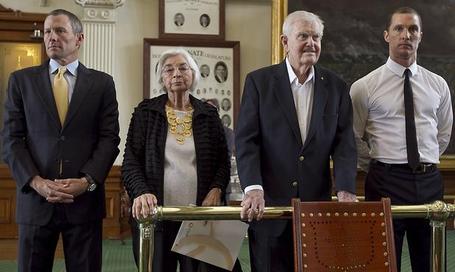 Edith told the committee about the formation of the Darrell K. Royal Fund for Alzheimer's Research, which will fund collaborative research efforts in the state, as well as promote the sharing of new information in the fight with the disease.

She also eloquently brought to light some of the struggles those caring for others with Alzheimer's face.

"Every day since Darrell's diagnosis with dementia, I deal with the stress of managing everything without my best friend helping me to make decisions," Edith Royal told the Joint Committee to Study Alzheimer's Disease. "It is so rewarding that at this time in our lives after so many years of living for the teams that Darrell coached and the game he played, it's now members of those teams and our football family that return from all over this country almost daily to shower Darrell with love."

The Fund will also have several notables serving on its Board of Advisors, including state Attorney General Greg Abbott, current Longhorns coach Mack Brown, businessman Red McCombs, Willie Nelson, Armstrong and McConaughey among others

Here is a look at a story on the committee meeting today courtesy KXAN-TV.