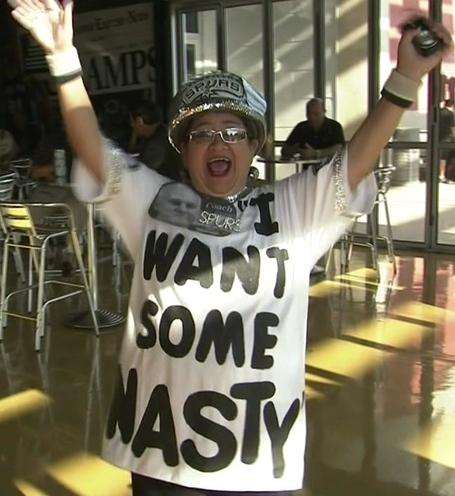 Spurs fans have vowed to fast for 45 minutes Wednesday prior to Game 6 in Oklahoma City in order to show support for a San Antonio team currently reeling from three straight losses in the Western Conference Finals.

"Neither fried chicken fingers nor churros shall pass my lips for almost an hour," vowed Spur fan Ben Abercrombie. "It's time to think less about ourselves and more about marshaling the appropriate spiritual energy so that Danny Green will stop being a complete piece of shit. Can I say that?"

Spurs fan Eddie Gonzales concurred. "Before these losses, I was all, like, Spurs all the way. Now, it's like, damn. So if letting my blood sugar get to dangerously normal levels will help Los Spurs, I'm down for the cause. Today, we are all Bobby Sands."

Alamo Height native Kelly Myers feels differently. "It's reckless to go that long without food. I'm hitting Applebees hard because I'm gonna use a lot of energy watchin' the game, screaming at Steve Kerr anytime he refuses to read a prepared statement that Tim Duncan is the best power forward ever after each TV timeout. And Wednesday is bottomless nachos."

Barking Carnival spoke to dietician Lee Anne Martinez-Horowitz about the dangers of fasting. She opined that Spurs fans who participated in the fast were not at serious risk.

"Research has shown that humans can actually go weeks without food and remain healthy, though it's not recommended. Spurs fans who fast for 45 minutes may experience some lightheadedness, but could also enjoy the benefits of better fitting shants and brief feelings of self-worth derived from something other than their professional basketball team."

Super fan Eddie Gonzales thinks there could be other benefits.

"Breaking it down for you, and I'm being real here, it's like this: we should never do a White Out again. That's not a slimming color. And our players were all like, damn, my retinas. It was like shooting in a blizzard."

Boris Diaw was asked for comment, but our correspondent was standing in the paint and could not hear him.