It was hard to make much of the New Mexico game on replay, particularly on offense where we faced a totally outmatched defense that gave Ash time to do a NYT crossword puzzle before finding Mike Davis on a shallow cross.

The most I learned from that experience was from a handy LHN graphic that revealed that Joe Bergeron has 164 career rush yards in the 1st half of games and 409 in the 2nd half. That came about from 5.5 yards per carry production in first halves and 7.2 yards per carry in second halves.

Of course this merely reveals what we already suspected -- it's hard to tackle big Joe in the 2nd half.

The New Mexico offense isn't really like anything else we'll see this year. I'll mention two Big 12 offenses later that utilize some option and pistol but New Mexico is more of a classic veer team. This wasn't zone-blocking with read elements, it was down-blocking, cut blocks, and dives.

That said, it was interesting to track the performance of the linebackers in filling assignments, taking on blocks, and running around the field. This is what I learned from viewing their flashback to high school football.

Jordan Hicks is the real deal. When he came to Austin he seemed perfectly suited to become a dynamic weakside linebacker in any variety of 4-3 defenses. His high school film was replete with highlights of Hicks flying around the football field and shrinking it down so that it resembled a playground dominated by a sociopathic 6th grader.

The flashes of brilliance we've seen from him since have indicated that he only needed some schematic seasoning and the departure of NFL-bound outside backers ahead of him to finally maximize his potential.

Two games into the season he has 20 tackles, 3 for loss, and a pass break-up. What stands out from his New Mexico film is how well he plays on the run, which will be important throughout the season against teams that make you play in space.

Steve Edmond, on the other hand, has a more classic linebacker skill set. In between the tackles he has a lot of value, and that will increase as he learns to play lower, but outside of the tackles he's more limited. I don't think we'll see him making a ton of plays in pursuit, but he can be effective in spilling a play for someone else to pursue.

Take the following play, which is a wishbone-style triple option. 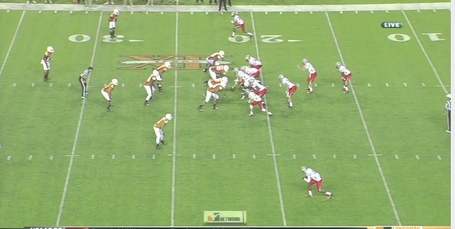 We line up with our secondary deep off the ball and we also played DeMarco Cobbs pretty deep as well, much like we'll see other teams use this position, where's he basically an extra safety. 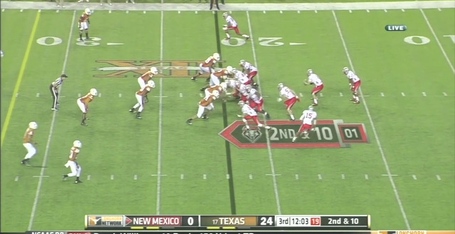 The Wide Receiver to the field side comes running in to play as the pitch man while the halfback, also deceptively lined up to the field, comes across to the boundary side as a lead blocker. The running back is the dive option. 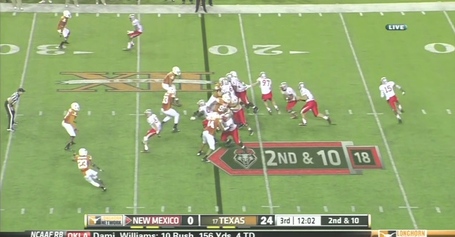 Edmond's job is to handle the dive option, Hicks has the QB, Cobbs generally gets to fly around and make things happen. He made 5 tackles for the game in this role. 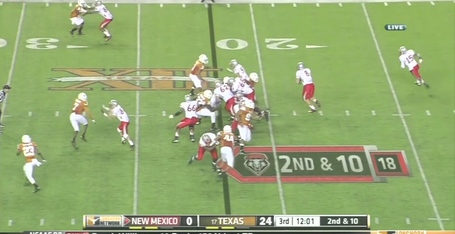 Edmond successfully fills the middle, but he lacks the quicks to get outside and make a play on the option (although most players would). Hicks is in good position to fill outside, but he needs to handle the lead block well to do so. Cobbs has diagnosed what's going on and he's doing his thing. 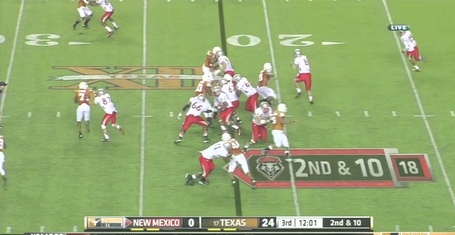 Hicks keeps his outside shoulder free when engaging the halfback while running laterally with the play, spilling the option further towards the sideline. 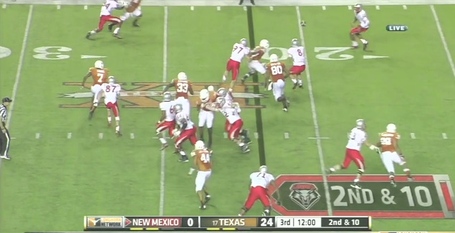 Hicks forces the pitch, which is Diggs' job and he's coming off the WR block to blow things up. The play resolves with Diggs hitting the pitch man in the backfield, failing to wrap up, and Hicks cleaning up anyways for a yard loss.

Throughout the game, and even on the next play, Hicks did a great job of taking on blocks and making tackles in space against the confusing New Mexico attack. Between Hicks, Cobbs, and the secondary Texas has a rare collection of players who can run, break down, and tackle in space, which is exactly what most of the Big 12 is going to make them do.

Edmond has a very specific value to this team as a plugger inside who can allow the defensive ends and other backers to fly to the edges. If you make him fight blocks on the run or change direction in space, I'm not sure how he'll look butsd I'm curious to see how he plays against spread teams better than Wyoming that use more misdirection and attack the middle of the field with their passing game. If teams can't find out how to make him move laterally they aren't going to like the effect he can have on their running game.

I'm eager to see more of what Cobbs offers against spread teams. Can he disguise and play different coverages? Can he stay healthy? Can he take on a lead block from a halfback? Positive answers to these questions would mean a big season from our linebacker corp this year.

Around the rest of the league:

Iowa St. had the opportunity to face the Greg Davis-coordinated Iowa Hawkeyes in their annual rivalry game this weekend and managed to win despite finishing 3 drives in the red zone with turnovers.

So far the experiment in Iowa City to combine their classic 4-3 defense and potent zone running game with the Greg Davis passing game has not gone terribly well. However, I think there is reason to believe that things won't go terribly well for other Big 12 passing games either.

Take this play late in the game:

Iowa has just completed a big passing play down the middle of the field and are trying to tie or win the game with a minute remaining. 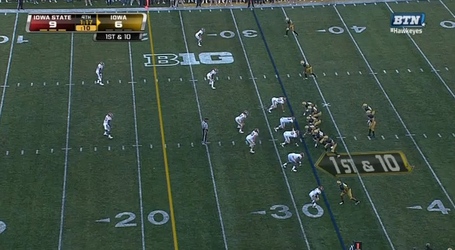 Iowa St. is in their basic 2-deep shell vs. Davis' preferred 11 personnel trips offense. They line up both their "hy-backer" (what they call the nickel back) and field corner 6 yards off the ball with the safeties 14 yards back apiece. They don't always align quite this deep but the M.O. in Ames is bend don't break, and they rely on tackling and offensive mistakes to kill drives. 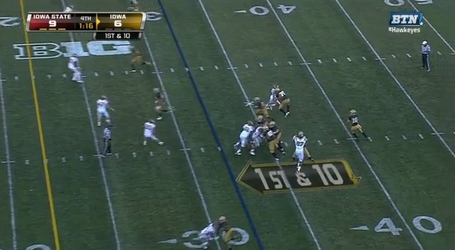 Old Greg hits them with 4 verticals, the spread staple that is a challenging concept for Iowa St.'s usual Cover-3 zone defense. The deep alignment of the nickel and corner combined with the good initial drop Middle linebacker AJ Klein gets means it's going to take some time for something to open up. 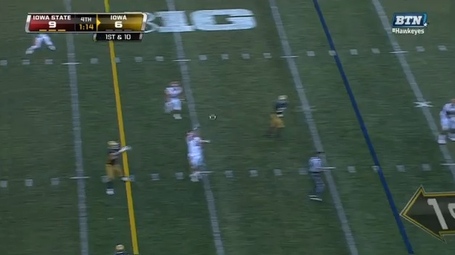 The TE cuts inside behind the linebackers Klein and Knott, however Knott has dropped back about 4 yards in an instant to tighten the window. You can see his lightning reaction here as he reaches his hand up. 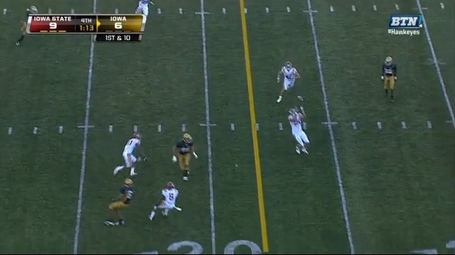 He then tips the ball to himself for a game-sealing interception and old Greg takes a swig of Baileys from a boot.

Klein and Knott combined in this game for only 14 tackles but they managed to hold the Iowa running game to 2.4 yards per carry and the passing game to 5.6 yards per pass attempt. It is exceptionally difficult to sustain drives on this defense because these two consistently make open field tackles, fill passing windows, and do basically everything that Big 12 offenses demand from linebackers.

On offense, they've brought back the Steele Jantz improv hour, and are running a ton of zone-read with a 270 pound TE named Hammerschmidt on the edge and a solid collection of backs led by Shontrelle Johnson. The running game is very solid, although it struggled against Iowa, and the improv hour is generally a mixed bag.

If you aren't able to turn over Jantz this team will bludgeon you to death. Consider their home schedule in league play: Tech, Baylor, Oklahoma, and West Virginia

You couldn't do a much better job of picking the teams in the Big 12 vulnerable to a team that can run the ball and ask you to sustain drives against disciplined zone pass defense.

So I'm now riding shotgun on the Iowa St. bandwagon. I'm expecting 7-8 wins, a big win over a team that no one expected them to be able to beat (OU, WVU are leading candidates), and some stunned media reaction to their final league ranking and record.

Last year's surprise team, Kansas St., is making sure that no one overlooks them this year. Their beatdown of Miami was impressive mostly for revealing a team that has become much more well-rounded on offense.

While Miami looks terrible, the manner in which Klein confidently eviscerated them in the passing game suggests that his command of the offense and gameplan has reached a new level. He knows where the candy is and he's going there without hesitation. Their running back Hubert is running well, the overall supporting cast is stronger, and the OL is gelling way too quickly.

Picking up from last year, Klein is still a patient and powerful runner but he's tightened up his release on throws. He looks more like a stiff 40 year old dominating a 2-hand touch pick-up game than a germanic barbarian aiming a framea at an unlucky legionnaire. Believe it or not, that's an upgrade.

I wondered if their defensive line would play as well as last year inside when they were somewhat difficult to move off the line of scrimmage. They lost solid nosetackle Ray Kibble but they're probably better overall. Vai Lutui is a fireplug inside, they have more depth, and their ends are playing better than last year.

It's a dangerous team. The big test will be how they handle an elite defensive line. Last year both Texas and Oklahoma manhandled their OL in the trenches. They'll get a well-prepared Oklahoma in Norman in 2 weeks that will test if the new OL can handle top-level athletes.