A Defense For All Seasons: The Multiplicity of Manny Diaz

Share All sharing options for: A Defense For All Seasons: The Multiplicity of Manny Diaz

Alright wise guys, what's the difference between the pictures after the jump? 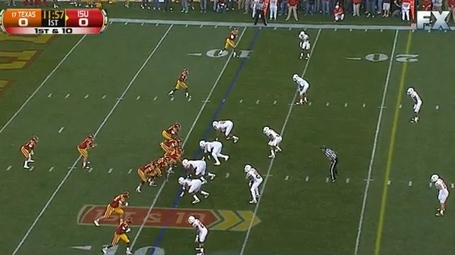 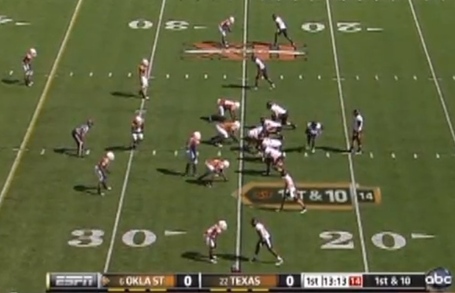 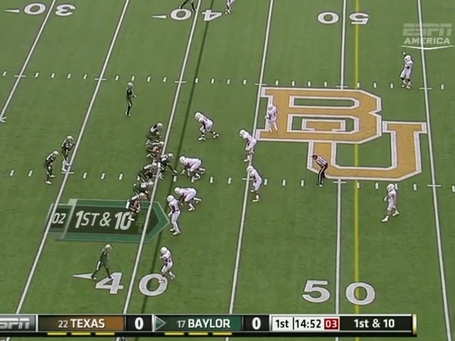 If your answers were personnel, alignment, and front; you would be correct. But you probably failed and that is acceptable around here. The shot from the Baylor and OSU games are basic 4-3 defenses with the nose tackle set to the field. The Iowa State defensive look is different in that the nose tackle is set to the boundary.

Indeed the first frame features Randall-Dorsey-Okafor-Jeffcoat on the DL, Acho-Robinson at linebacker, Vaccaro in the nickel, and Phillips-Diggs-Byndom-Gideon in the secondary. That was basically our base personnel last season. 4 DL, 2 LB's, and 5 DBs.

The next frame has Randall as the nose tackle with Jeffcoat and Okafor playing end. Pretty standard. But in the backfield we have Acho and Robinson (who basically never left the field), and Christian Scott joins the same cast in the secondary we saw in the frame against Iowa St. That's 6 DB's, 2 LB's, and 3 DL.

Finally, against Baylor, Jeffcoat was battling injury so here we played Whaley-Okafor-Randall on the DL, Acho-Robinson-Hicks behind them, and then the typical nickel secondary with Scott replacing Phillips as the field safety. I'm not sure why Scott replaced Phillips other than rewarding senior bleeders. Or he was injured. You'll see in two short weeks the difference in safety play between Scott and Phillips.

Without watching what happens after the snap you wouldn't realize what Diaz is up to here. I'll fill you in:

The defense against Iowa State was pretty standard. However, Vaccaro is playing the role that the SAM linebacker in a 4-3 defense would play -- Handle run-force responsibilities to the strong side and either man-up or zone the #2 receiver. Because Vaccaro is half-chupacabra AKA Slot Eraser Machete Vato, we would frequently line up him in position to play man on the slot receiver knowing that he has the speed and awareness to still reach his run gaps from the hash.

As Scipio noted in his post-mortem, Diaz schemed to prevent any damage from Steele Jantz improvisations and allowed ISU to try and work the ball down the field with their running game against an outnumbered run front. On the occasions in which they reached the red zone, we threw some crazy blitzes at them and thwarted their efforts. Everyone else is in a typical position and role.

Next we have the Oklahoma St game. In my initial write-up after this game, we covered that Acho was basically a stand-up DT for this game. He would stunt into gaps to either play the role of a 3-tech, or stunt into another gap. We may have done this to keep Acho on the field despite an injury, or Diaz might have figured that the pre-snap confusion and the downhill momentum Acho could generate from that spot would help get needed pressure up the middle more-so than playing Howell or Dorsey. Against the Air Raid teams (as well as other passing teams), Diaz was very interested in attacking the interior of a protection scheme and denying the QB interior throwing lanes or space.

This strategy is somewhat similar to Akina's "Desert Swarm" defense back at Arizona in the early 90's, or Tom Landry's 4-3 Flex defense with the 3-tech aligned off the line of scrimmage. The risk here was that we did not have the rest of our defense in position to support the run, so stunting Acho meant that runs that he didn't blow up were coming against an out-leveraged back 7.

Christian Scott took over Acho's position as the weakside linebacker. In Diaz's 4-3 defense, that linebacker spot has to play coverage against the #2 receiver, and OSU's #2 receiver was Josh Cooper who had 715 receiving yards that year. He had 67 against us including a big one up the seam, so the effectiveness of playing Scott there was somewhat in question. He at least helped limit the bubble screen and wasn't the downgrade in run defense from Acho that a corner would have been and at least a marginal upgrade in pass coverage.

The rest of the defense is in their typical nickel personnel and alignments.

Finally, we have the defensive looks against the Baylor Bears. The first thing to note is that Acho, Hicks, and Okafor are all standing up. Between the 6 DL/LB's we have on the field, we're going to form an over or under front with one of the LB's playing the role of a defensive end. In that game, Acho and Hicks generally replaced Jeffcoat as one of the defensive ends while Whaley-Randall-Okafor would play the roles of the other end position, the 3-tech, and the nose.

On this play, Whaley, seen as the defensive end on the bottom, stunted up into the B gap and became the de facto 3-tech. Acho blitzed off the edge as a defensive end, Randall remained the nose, and Robinson / Hicks were the linebackers.

In the secondary you had typical roles and alignments with Vaccaro as the nickel and Gideon-Scott as the safety tandem. I believe that the return of this safety pairing which Briles had already shredded in 2010 was a key factor in our defeat. We could not use our safeties against the run game as we would have liked because Scott and Gideon lacked the hips to turn and run with the Baylor inside receivers and had to back up after the early big plays. You also had five turnovers by Case McCoy.

The spread offense allows these kinds of trickery by Diaz because the high volume of pass plays or finesse runs permits the defense to achieve enough leverage with confusion and speed to overcome the fact that they are asking undersized players to handle roles normally filled by stronger and heavier players.

Additionally, Diaz uses his Fire Zones as a "base defense". Meaning that to him, they are ordinary calls that he dials up on 1st and 2nd down like an older coordinator would with "Cover-3" or some other base defense. The Fire Zones have simple rules for the defensive front players, so playing with only 3 DL hardly matters because it's likely that only 3 down linemen would have been rushing anyways. Playing with hybrid personnel creates greater confusion for the offense about who is playing what role in a base defensive front as well as who might play what role in a Fire Zone.

Let's review the hybrid roles Diaz used in these frames:

The nickel. It's basically part of every Big 12 team's base defense. You want a SAM linebacker who can play force or cutbacks against the run, cover a slot receiver, and blitz off the edge. Cobbs can play this role, Vaccaro excels here, and it's likely that we'll ask one of our other veteran DBs to learn this role as well like Phillips or Byndom.

The stand-up defensive tackle. Because we have an embarrassment of riches here and plenty of players like Whaley and Jackson who are strong pass rushers, we may not utilize this position as much except on obvious passing downs when Okafor and Jeffcoat tend to move around all over the place.

However, we could play a defensive look with both Hicks and Edmond on the field and only one nose tackle in which the offense couldn't be sure which of the two would be the middle linebacker, and which would be flying at the line as a run-blitzer/de-facto defensive tackle. If Edmond proves to offer more as a run blitzer than some of the DTs do as pass rushers you can expect him to be used in this role.

The "money" backer: That's what Saban and Belichek call their dime back. The dime comes in if you anticipate your weakside linebacker having to play a lot of coverage in space and want to use a defensive back instead. Our normal defense will play Hicks as the weakside linebacker, but when we want to go hybrid I think the following players could fill in here:

DeMarco Cobbs - he has the speed and range you want but most importantly he can change directions and accelerate like no other linebacker in this conference save for Corey Nelson.

Peter Jinkens - He's a classic spread linebacker, I don't know if he'll be ready to play starter snaps this season but this is the kind of use we'll find for him in the future.

Adrian Phillips - I doubt we'll feel good enough about our young safeties to drop Vaccaro and Philips both down in nickel and dime positions but he has the physicality and athleticism you would want here.

A healthy Cobbs probably gets the call here but we could also use a corner or young safety. Muschamp used Palmer in this position in 2008. Hicks is athletic enough that we may leave him here but that would mean Edmond has to stay on the field as the Mike against Trips formations and that will limit what we can do with our coverages and put a lot on his plate. I'd rather let him attack the LOS and bull rush a bewildered guard.

Defensive end/outside linebacker - Okafor and Jeffcoat are so athletic and well rounded that I don't think we'll pull either of them off the field except to get rest or if they are injured. However, if we do need to mimic the strategy against Baylor then the following players could switch between outside linebacker and defensive end against a passing team:

Jordan Hicks - He's already done it. He's a fantastic blitzer off the edge and obviously he can handle any of the coverage assignments that a defensive end or outside linebacker would have.

DeMarco Cobbs - Our wealth of great blitzing linebackers is going to be ruinous for the spread passing teams in our league who can't protect their QB. Teams will have to make choices about how and when they are going to ask their QB to stand in the pocket and wait for something to open up down field.

The simplicity of the roles within Diaz's Fire Zones and other base defenses allow him to teach versatile players multiple positions in this defense. The result is that he can play the same defenses with different personnel and alignments to create confusion and leverage against the best features of an opposing offense from week to week. It also means we can recruit the best athletes and just move them around in the defense as needed without being slaves to archetypes.

We've covered four positions where Diaz has covered up personnel deficiencies or injuries to play his base defenses with the players he has available. We can be confident that as long as he has the athletes, Diaz will field "A defense for all seasons" that can match the various strengths of all those scary Big 12 offenses without abandoning his basic principles.