Arkansas Brings In John L. Smith for a Tryout

Share All sharing options for: Arkansas Brings In John L. Smith for a Tryout

When John L. Smith left Louisville to take over at Michigan State, the Cardinals hired Bobby Petrino to take his place. Arkansas has decided -- that for 2012 at least -- turnabout is fair play.

Smith was given a 10-month contract worth $850,000 to guide the Razorbacks through the upcoming season, giving the program a sense of continuity while also providing Smith with a chance to win the job permanently. Smith has been the special teams coach at Arkansas for the past three seasons. He had recently taken the head coaching position at his alma mater, Weber State, and leaves before coaching a game. 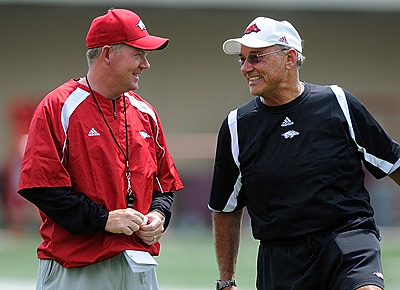 The hiring makes sense for the program and is another sharp move by Razorback Athletics Director Jeff Long, who gained some positive press by swiftly canning Petrino after it turned out that he had hired his mistress and then lied about it.

Smith knows the players, and he is expected to keep the Petrino system in place. Paul Petrino is the offensive coordinator and Paul Haynes runs the defense, and both will stay on. Meanwhile Smith, who is used to being the face of a program, can handle the public relations aspect of the job.

The hiring also buys Long time for a "national" search for a coach, should he choose to go that route, rather than trying to raid another university over the summer or hiring someone who would be familiar to alumni and fans but is currently unemployed (such as Steve Mariucci or Phil Fulmer, both of whom reportedly were interested.)

Before the Petrino scandal, Arkansas looked to be a pre-season Top Ten selection. Bringing Smith aboard gives the team its best chance of catching its breath this summer and having a shot at a championship season. It also allows for a more glamorous permanent hire after the 2012 season.