In many respects, Haley Klepper of Waco is a typical 11-year old girl. Bright-eyed, possessing an infectious grin, Haley can light up a room.

There are also stark differences.

Six years ago Haley went to bed one night as an engaging, active five-year old. The next morning she woke up with a mysterious debilitating disease that she and her family have been battling ever since. Haley suddenly began losing control of her motor skills. Her hearing and eyesight also began to dim and nobody knew what the hell was happening.

Six years later, doctors think they have a name for it, Mitochondrial Disease, but they still haven't completely found how you contract the disease, much less how to cure it.

Former Longhorn Quan Cosby is a longtime family friend of the Kleppers. Quan wanted to help Haley and her family raises awareness and the need for research on Mitochondrial Disease and he thought his annual Youth Football and Cheer Camp was a good venue for it. Of course it didn't hurt that Quan's new Indianapolis teammate, Andrew Luck, was one of the counselors.

I was asked to oversee the press event in conjunction with the camp, and I have never been so happy to forgo a Saturday golf game for work. 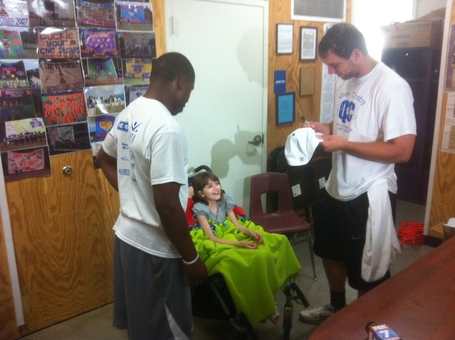 Quan's roots run deep in Mart. His name is plastered all over the athletic facilities as an all-state performer in football, track and baseball. Cosby originally committed to play football for Texas in 2001, but the Anaheim Angels drafted him in the 6th round, and he spent four years knocking around the minors. Cosby then came back to Texas where he had a total of 212 receptions for 2,598 receiving yards and 19 touchdowns. He finished his Longhorn career in style by scoring the winning touchdown against Ohio State in the Fiesta Bowl with only 18 seconds remaining.

Like many small Texas towns, when arriving in Mart it's not hard to spot the high school football stadium. Making the turn up the two-lane gravel road, avoiding pot holes along the way, I suddenly spotted the field, which was covered with 250 kids ranging from 5 years old to high school age. It was a typical hot June Saturday in Central Texas, but the weather was of no concern to the kids or their counselors. 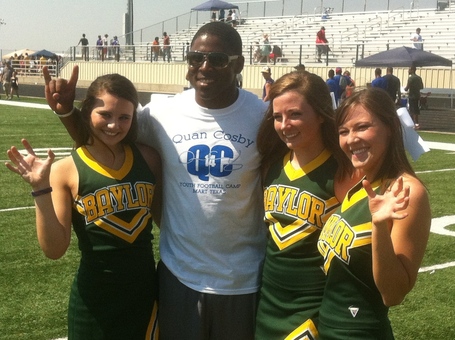 Make no mistake, Quan Cosby and Andrew Luck were engaged in the process. They were teaching, cajoling and encouraging kids through various drills, finishing with an enthusiastic series of 40 yard dashes.

Quan graduated from Texas in 2009 with a degree in Social Work. It only takes a few minutes watching him work the camp to understand that the degree means more than a just piece of paper hanging on a wall to Quan. Every few minutes he was moving from group to group mixing football information with life skills.

While talking to the younger campers, who were fidgety, as most 5-6 year-olds are, he simply said,

He could also keep order with a quick wit. One youngster (6 or 7) kept cutting out of line insisting he wanted to be the QB for the drill. Quan finally said,

Luck was also enjoying himself, teaching a little technique and giving encouragement. He is a big kid (a legit 6-4, 225) and moves easily. When asked why he was in Mart today, Andrew laughed and said, "Because Quan's jersey at Indy is #12."

When the new top draft choice comes to a team and wants his number there usually a negotiation for it - money or other favors usually change hands. Quan has the #12 at Indianapolis and his price was Luck working his camp. To his credit Andrew said he said yes in a heartbeat and that the chance to come back to Texas and work with kids made it a no-brainer. 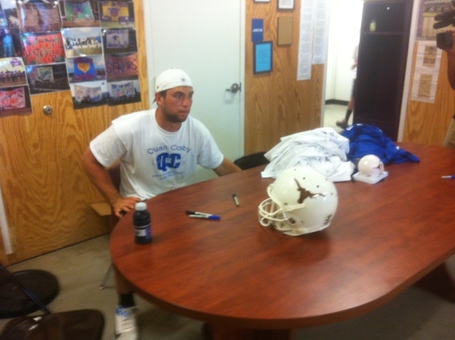 As I said, I helped organize the media event. Both Cosby and Luck spent nearly an hour after the camp finished signing anything and everything placed their way. Both were incredibly cooperative with five TV stations and the newspaper that covered the camp.

Haley gets tired easily so her family brought her to Mart near the end of the day. Over the years I have seen staged events where athletes come in, do the photo op and move on. There was none of that today.

The genuine love between Quan and the Klepper family was evident well before they stepped in front of the cameras. Andrew Luck was so free and easy with Haley you would have thought they were BFFs. And when it was time for Haley's dad, Greg to talk about the disease and the need for research, both Quan and Andrew moved off to the side and listened intently.

I enjoy the NFL as much as anyone, but I have never really been invested in the fortunes of a particular team - I save that for college sports. I think that this year however, I will join Haley Klepper in paying particular attention as to how the Indianapolis Colts are doing.