It's been a pleasure, Aggies.

Share All sharing options for: It's been a pleasure, Aggies.

I'm grateful that ESPNU knows there's nothing else to watch in the month of July. Tuesday night I had the pleasure of watching the putative No. 18 ranked game of 2011, which featured the Horns versus the Aggies. I couldn't be more thankful for the way the defense and special teams performed in that game.

While all fans can all be proud of the historical record against the Ags, I can't pretend the last laugh hasn't been the loudest. Most considered the Horns chances slim going into this game but detailed preparation along with the luck of a dog with two bowls of water in this Houston heat, they were we able to pull out the win.

We can't pretend this game went the way we thought it would. With both Cyrus Gray and Christine Michael being out, I'm sure we all assumed Ryan Tannehill, Jeff Fuller, Ryan Swope (who we still can't find), and Co. would have a big day. Ironically, they actually kicked the D's ass here and there in the running game with Jacquizz Rodgers, er, Ben Malena. But, that was all by design. The preparation for the game was obvious:

Sell out on stopping the passing game. And damn did that plan work well. We enjoyed a perfect storm of the Aggies taking some things for granted and the defense seeing exactly what they prepared for.

So, what hurt the Aggies?

A closer viewing of the game revealed the weaknesses in the Aggies arsenal. Feels good to know the coaching staff picked up on this and exploited it accordingly... But here they are:

1) Ryan Tannehill did not attempt to look off any receivers or go through any progressions. It was obvious he had several predetermined reads. It appeared the only flexibility he was allowed was to check to a run play at the line of scrimmage OR run for his life when the original read was covered. There were a few times when the coverage aligned perfectly and he made some completions. But, for the most part, when Tannehill forced the original reads, the defense capitalized on it.

2) The Aggies did not run a variety of routes. Well, at least they didn't run a variety of routes with the receivers they actually throw to. I have no clue what the other nameless receivers' routes were in most cases, but it didn't matter because they weren't getting the ball anyway. The outside receivers frequently ran curls, streaks, and slants. The inside receivers ran bubble routes to the flats, wheel routes, or found holes over the middle. The most sophisticated route I saw was when Swope was at inside receiver with obvious single coverage and would run an option route based on what the defender gave him. In most instances the routes were simple. From the look of things, the D had a minority report out on the plays called. And except for the few times there was a miscommunication, the defense had it covered.

3) The offensive line had a short time clock when it came to pass protection. It's not that I think they weren't talented enough to protect a tad bit longer but it appeared as though they were anticipating a quicker throw by the QB. With the defense making it a priority not to allow the quick decisions, they couldn't sustain the block as long as necessary. While Tannehill toughed it out, he took a nice beating for the day. I didn't feel bad for him as I'm sure he got some much needed attention from his significant other after the game.

What made the difference for the Horns?

a) Cover 2 Defense - This was the perfect (with an English pronucnication) defence against the Aggies. First, it limited the exposure of the safeties by allowing them to focus on half the field and reading the QBs eyes. With the defensive line being talented enough to get pressure with 4, the D was able to drop all the LBs into coverage to cloud the middle of the field. This freed up the corners to press the receivers at the LOS and play the run aggressively. Pressing the outside receivers and clouding the middle of the field limited Tannehill's ability to make many quick reads/throws and forced him into some bad decision making or to run for his life.

Example: Diggs' interception. The defense gave a single safety look but dropped Diggs back to play the cover 2 safety on the opposite hash. Tannehill thought the only safety he had to beat was Gideon (yes, he made this mistake multiple times). But, Diggs baited him into making the throw and capitalized on him throwing behind and away from Gideon. Result: Huge play and momentum swing for the Horns. It was at that moment I knew we had them perfectly schemed on defense.

b) Bracket Coverage - The pic below is a perfect demonstration of exactly what the scheme was in bracket coverage. The corners played outside leverage on the receivers and the safeties' eyes went straight to the 2-receiver side of the field just waiting for one of the receivers to come across the middle. The pre-snap read would suggest the safeties' responsibility was to play the entire field. Crazy for them to think the defense would actually do that, right? But, knowing this is a one-read offense, this bracket defense immediately takes away Tannehill's first reads on this play. The WRs out routes are covered because of the CBs leverage. With the LB playing underneath and safety playing high to rob anything coming inside, Tannehill gets into "oh, shit" mode. He wasn't his best in "oh, shit" mode in this game and it played to the defense's advantage. But, lucky for him, NFL scouts clearly didn't watch this film (or, any video montage highlights of the Horns defense against him Ags during random commercials). In several situations, namely with Swope in the slot, we saw Vaccaro playing those underneath routes. That's where Swope buttered his bread last year. Now, we can only hope his meals are more than just bread while he's in witness protection. 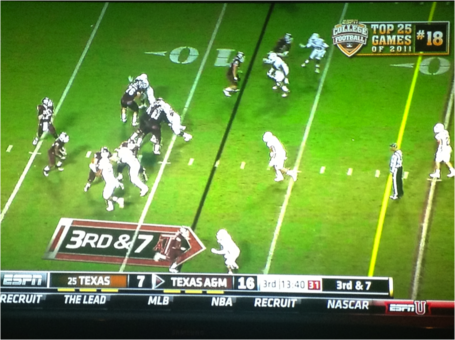 c) Ability to adjust - The first drive looked scary. Byndom bit on a route in the flats in cover 2, leaving Gideon to make a risky open field tackle which got the Aggies in the red zone. They also had no clue the 3rd string RB was worth a damn. But, they weathered the storm, made adjustments and actually executed well from there. They played tenacious up front, allowed a little leakage in the run game, but got off the field. They were actually so damn good, ESPNU skipped two defense possessions where only one minute or so ran off the clock. Looking forward, the value of making adjustments is priceless. It takes maturity, smarts and focus to achieve. This defense, with several players returning, made it happen series after series.

What was most rewarding about taking another look at this game was not only enjoying the execution by the defense, but taking a glimpse into the tenacity and sophistication that this young defense will bring into next year. I couldn't help but be pleased with the pressure applied up front. The two starting inside LBs will be replaced by a couple who most feel even more strongly about. In this game, Kenny V was almost invisible... But, so was Swope. This is exactly what they'll need going into next year. While we expect some major improvements on the offensive side of the ball, it feels good knowing with these guys on D, the Horns will have a chance in every game.

With this I say so long, Aggies. We'll miss the yearly trash talk and outlandish expectations. But, we'll never let go of winning the last one.